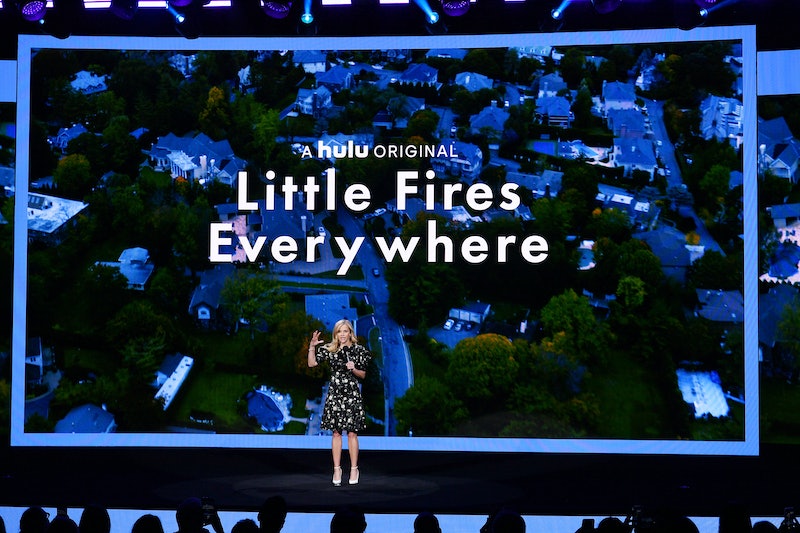 While you may feel constantly overwhelmed by the plethora of TV-viewing options that a modern audience faces today, there's one show that will likely become a non-negotiable add to your watch list, and that's Little Fires Everywhere, Hulu's upcoming limited series. On Tuesday, June 11, the streaming service revealed a first look at Little Fires Everywhere stars Reese Witherspoon and Kerry Washington in character, and seeing these two together will get you unbelievably pumped for the show.

The two powerhouse actors posted the on-set photo to their respective Instagram accounts on Tuesday morning, and it highlights the way that the TV adaptation of the 2017 novel from Celeste Ng will make the two main adult female characters' differences come to life. While Witherspoon, who currently stars in HBO's Big Little Lies, wears a collared A-line dress that looks like it might come from the star's Southern-style clothing brand, Draper James, Washington, previously of Scandal fame, wears all black, tight clothing. They couldn't look more different, which is perfect for their characters Mia Warren (Washington) and Elena Richardson (Witherspoon).

In Washington's Instagram post sharing the new photo of the Little Fires stars together on set, she captioned it "Yup. The [fire emoji] just got LIT." Now you know why Little Fires Everywhere might set your regular TV-viewing schedule ablaze.

The story of Little Fires Everywhere revolves around four different families, with the Warrens and Richardsons playing the largest parts. The other families involved in the tale of suburban-secrets are the McCulloughs and the Chows. According to a press release obtained by Bustle, Rosemarie DeWitt will co-star as Linda McCullough, but the casting of Bebe Chow has yet to be announced. In March, ABC released a casting call for the role of Bebe, which described the character as "scrappy and fierce." And once the role is cast, the story of Little Fires Everywhere will really come to life.

In the book, Bebe is a woman who will do anything to find the child she gave up a year before who has now been adopted. Bebe isn't the only character with a complicated relationship to her kids, though, as a secret about Mia's daughter, Pearl (Lexi Underwood) ends up making waves in their Shaker Heights, Ohio, community.

Not only do Washington and Witherspoon (which would make a great presidential campaign ticket, don't you think?) star in Little Fires, but their respective production companies, Simpson Street and Hello Sunshine, are behind the show too. With those two calling the shots on the show, there's no doubt the new show will tickle fans of the story. And if you're worried the show will stray far from the original source material, fear not. Witherspoon for one has confirmed that she's a major fan of Ng's novel, as she picked it for her book club in September 2018, per The Hollywood Reporter.

In March of 2018, when Witherspoon announced her new collaboration with Washington on Twitter, she wrote about her connection to the book. "I love this beautiful book about motherhood and I can't wait to finally collaborate with one of my favorite actresses," she tweeted on March 2, 2018, along with a photo of herself and Washington smiling, both holding up copies of Ng's book.

It's clear that Witherspoon and Washington will do everything they can to make their adaptation of Little Fires Everywhere the best it can be for fans of the novel. And based on the first photo, they're already well on their way.