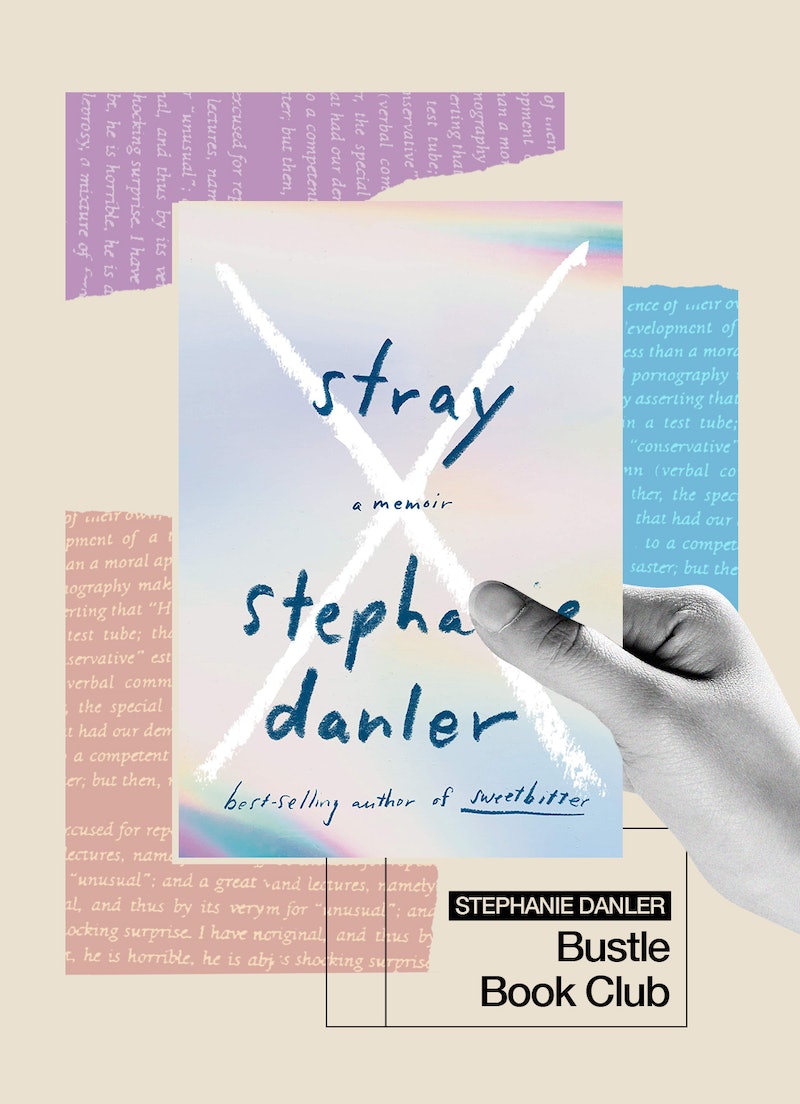 Stephanie Danler never meant to write about her affair. “There was so much of it my partner didn’t know about and I had a lot of shame and confusion around it,” the now-married author and mom tells Bustle of her prior relationship with a married man. “When I went to write about California I could’ve left the affair out. Except the reason I moved back to California was to be with him and start a new life here. So the whole thing would’ve been a lie.” The result of Danler's commitment to being honest is Stray, a vulnerable yet vibrant memoir that excavates the ugly corners of her life: her father’s drug addiction, the abuse she suffered at her mother’s hands, and her own self-destructive tendencies.

Danler typically delights in writing about sex: Her provocative debut novel-turned-TV-show Sweetbitter charts a young waitress’ spiritual and sexual awakening in New York City. “I'll talk about sex all day. But with Stray, it wasn’t pleasurable,” she says of writing about her toxic relationship. “The sex is a punishment and the lust that we feel for each other is also a lust to hurt each other.” Danler spent days reviewing her messages with the man she calls “the monster.” “It was sad to read our WhatsApp transcripts, I’m talking 500,000 words, and all of the dirty texting and the storytelling about what the future was going to hold.”

Though Danler is resolute in her decision to lay her life bare, she still worried about what her husband, young son, and readers would think. "I sent an early draft to ‘the monster,’ and while he was not thrilled, he was, in his own way, supportive," she says. “My husband read the finished version just recently. He sees it as something beautiful, so that's all you can ask for.”

A month before Stray’s publication, Bustle spoke with Danler about reading addiction memoirs, briefly moving to Barcelona, and being pregnant with her second child in quarantine.

On retreating to Spain to write:

We left Los Angeles and sublet our house. [My husband] Matt quit his job. We moved to an apartment in Barcelona that had a big office. I really hope that someday I become a writer who can integrate writing into their daily lives, but I really needed to be several time zones away from Sweetbitter, the ability to go to lunch, and meetings to talk about new scripts and new projects. [Moving to Barcelona] isn’t sustainable, and it's not accessible for everyone. But we were able to do that for nine weeks. So that's what we did.

On the books that helped her shape Stray:

I read addiction memoirs. I read Mary Karr for the first time. Colette’s writing about her mother was very influential. Melissa Febos’ Abandon Me made me rethink what memoirs could do. I read older memoirs as well, like Vivian Gornick's Fierce Attachments about her mother. And Nabokov's Speak, Memory, which is like the classic tome [to read] if you're going to write about your memory.

On her love of plant music:

There’s this music that’s the sounds of plants recorded at this infinitesimally small level. [Listening to it] felt like being on drugs and it sounded like instrumental music. Music was so important to [to the process of writing] Sweetbitter, but with Stray it was all about photographs and notebooks and transcripts of conversations. Those were the things that were so powerful to me. I didn't need music to get [into the headspace].

On how writing for TV has changed her process:

Having worked in television for two years, I saw how useful outlines can be. I had notecards that I would arrange on a wall. The notecards said things like “Joshua Tree,” or “Chateau Marmont,” and “Laurel Canyon.” So I would arrange them on a wall — like episodes — until I found a sense of pacing and could build towards the climactic moments.

On the beverages you’ll always find on her desk:

[Before I was] pregnant, it was coffee. Pregnant, I have green tea in the morning and then I have an adaptogen blend — this is so L.A. — it’s like an herbal blend called brain dust. It has rhodiola, astragalus, ashwagandha, and it tastes terrible. But I'm convinced it really works.

On her life in quarantine:

I'm due in late July. Releasing a book and giving birth to a child are two situations in which you really want the world to feel at least a little bit stable. And that is not the case for me. With my pregnancy, I consider myself really lucky. I'm working with a midwife, I don't go to doctors' offices, and I'm giving birth in my home if everything goes well. So it's more just about the state of the world.

More like this
10 Equally Romantic & Heartbreaking Books From British & Irish Authors
By Shahed Ezaydi
Meghan Trainor & Daryl Sabara Are Expecting Their Second Baby
By Jake Viswanath
Prince Harry Incorrectly Recites Christina Aguilera’s “Genie In A Bottle” Lyrics
By Jake Viswanath
Jessica Simpson On The Time She Was Pursued By A Backstreet Boy & An *NSYNC Member
By The Editors
Get Even More From Bustle — Sign Up For The Newsletter
From hair trends to relationship advice, our daily newsletter has everything you need to sound like a person who’s on TikTok, even if you aren’t.