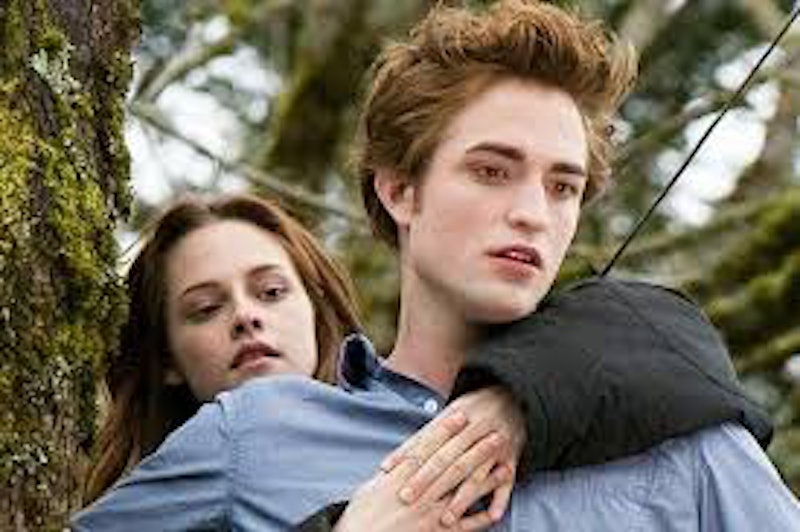 Fifteen years after the publication of Twilight, and almost 12 years after she canceled the release of this very book, Stephenie Meyer is finally bringing Midnight Sun to the masses. Bustle has compiled everything we know about the new Twilight book, which revisits the events of the first novel from Edward's perspective. The new Twilight book is out on Aug. 4 and available for pre-order today, so you won't have to wait long to bask in the Midnight Sun.

Back in 2008, excerpts from Midnight Sun leaked online, shortly after the release of Breaking Dawn and just ahead of the Twilight film release. In a letter posted to her website, Meyer told fans that the event "was a huge violation of my rights as an author, not to mention me as a human being," and it drove her to give up on the project altogether.

"I feel too sad about what has happened to continue working on Midnight Sun," she added, "and so it is on hold indefinitely."

Now, more than a decade after portions of the unfinished manuscript landed on the internet, Midnight Sun is finally ready to sparkle in the light of day. Here's everything we know about Midnight Sun so far:

It comes out this summer, just in time for beach read season

If your teenage years were spent awaiting the summer release of each new Twilight Saga installment in turn, you're in luck. Midnight Sun comes out on Aug. 4, which means you can get all up in those #throwback feels this year. That may be bittersweet, because, as Meyer noted in her Midnight Sun announcement, "who knows when" things will get back to normal for everyone? If anything, though, the presence of a global pandemic has everyone clamoring for nostalgia, and the new Twilight book is here to provide it.

It isn't Life and Death, but it might be better

As recently as 2013, Meyer swore she'd never return to the Twilight Saga, telling Variety that Bella and Edward's world was "not a happy place [for her] to be." In October 2015, however, Meyer released Life and Death, a gender-bent Twilight starring Beau Swan and Edythe Cullen, which stoked fans' hopes for Midnight Sun anew. But Life and Death wasn't Midnight Sun, and Midnight Sun isn't Life and Death.

As Meyer noted back in 2015, gender-swapping Bella and Edward's characters wouldn't allow her to tell the story without major changes, such as cutting out Renesmee's character entirely. That's not a problem for Midnight Sun, however, as Bella's still human, and therefore capable of having children. There's no word yet on whether Meyer intends to re-write all four Twilight books from Edward's perspective, but fans can hold out hope for more.

It will finally give readers Edward's side of the story

Twilight sticks readers in Bella's shoes, and she... doesn't spend a whole lot of time with Edward for much of the series' first installment. Instead, she hangs out with the other Cullens and Jacob, wonders why Edward keeps showing up to save her from freak accidents, and doesn't sleep too well knowing that Forks, Washington might be infested with vampires.

Because Midnight Sun will follow Edward, readers will get to find out just what, exactly, he was up to during all the time he spent away from Bella. If you've ever found yourself wondering just what the heck Edward was doing while Bella pined for him, you can rest easy knowing that your questions will finally be answered this year.

It's a lot longer than Twilight

Following fast on the heels of Harry Potter, which opened the floodgates for super-long YA novels, Twilight clocked in at nearly 500 pages when it landed in stores in 2005. Midnight Sun is set to be even longer, Meyer told fans in a recent episode of PICTURESTART and Brat TV's Facebook Live series, Letters To_______.

"I can tell you this book is almost twice as long as Twilight," Meyer said in her Zoom call with Remember Twilight? podcast co-hosts Emily and Maren.

Midnight Sun will be 672 pages in hardcover, according to Goodreads.

It may be the last Twilight book

Twihards will be disappointed to learn that Midnight Sun could be the last book about Edward, Bella, and their family. In her Letters To_______ interview, the author revealed that she had no plans to continue the series as of now, citing a time-crunched schedule that had her doing a final round of edits on the book in mid-June, less than two months ahead of the book's Aug. 4 release date.

COVID-19 may not preclude a Midnight Sun book tour. In addition to her Letters To_______ interview, the author will hold an in-person book launch at Shelton, Washington's Skyline Drive-In Theater on Aug. 7, and will appear virtually for a similar event at North Smithfield, Rhode Island's Rustic Tri View Drive-In on Aug. 8.

The author will also hold two virtual events, one ticketed and one public, later in the month. The ticketed event, hosted by Books-A-Million, will take place on Aug. 10. Attendance is capped at 1,200 people. Tickets are available online for $32 each. Barnes & Noble will host the public virtual event on its official Facebook page at 7 p.m. EST on Aug. 14.

Stephenie Meyer's Midnight Sun is out on Aug. 4 and is available for pre-order today.

More like this
Netflix Shut Down 'Bridgerton' S3 Rumours About A “Very Dark” Storyline
By Bustle
Bill & Frank’s 'The Last Of Us' Episode Has Twitter Emotionally Wrecked
By Alyssa Lapid
'Friends' Star Maggie Wheeler Offers Support To Matthew Perry After Reading His Memoir
By Alyssa Lapid
Anne Hathaway Shared A "Thrilling" 'Princess Diaries 3' Update
By Darshita Goyal
Get Even More From Bustle — Sign Up For The Newsletter
From hair trends to relationship advice, our daily newsletter has everything you need to sound like a person who’s on TikTok, even if you aren’t.