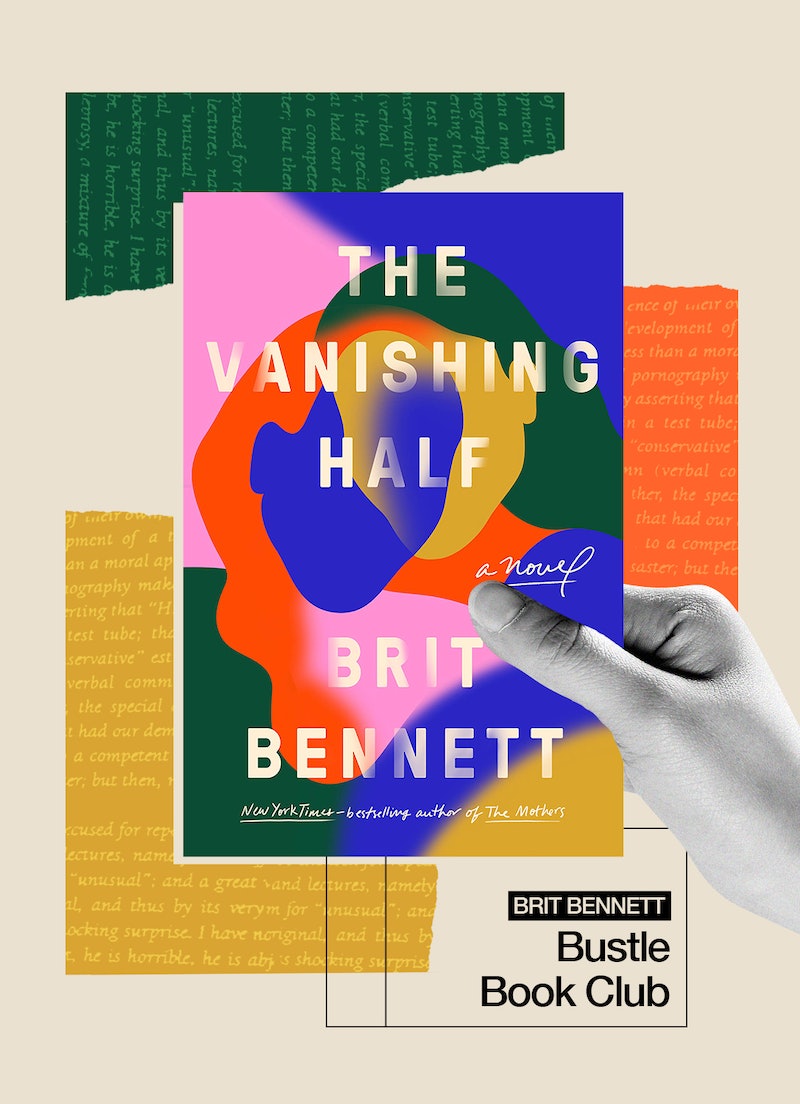 Brit Bennett's latest novel, the family epic The Vanishing Half, has already been compared to The Bluest Eye, the works of James Baldwin, and Nella Larsen's Passing. Yet Bennett notes a more surprising parallel: the strippers-turned-scammers blockbuster Hustlers. But the commonality is less about the deceit central to the plot and more about deep emotional connections. “I thought, ‘Oh, [Hustlers] is going to be a movie about women scamming.’ But the center of the movie is these women taking care of each other,” Bennett tells Bustle. “I'm always drawn to those types of stories about the complications of sisterhood and the challenges of being there for each other.”

It’s the complex, messy, yet inextricable bond between sisters that makes up the emotional core of The Vanishing Half. The book tells the story of the Vignes twins, Black sisters who grow up to occupy different worlds — one secretly passing as white, the other embracing her true racial identity. The 30-year-old author of New York Times bestseller The Mothers first conceived of the idea for her sophomore novel when her mother told her about a town in Louisiana where Black people intermarried so their children would get progressively lighter skinned. Though Bennett wasn’t able to track down the town — not even a trace of it existed on Google Maps — the author found a silver lining. “As a novelist, that's where it gets really interesting, actually,” she says. “That's where your mind starts imagining and sort of thinking about the mythology of this place.”

To create Mallard, the fictional Louisiana light-skinned community where The Vanishing Half’s twin protagonists grew up, Bennett drew on newspaper articles from the ‘60s, the history of creole communities, and books like A Chosen Exile by Allyson Hobbs. But the novel’s exploration of race reaches far beyond Mallard, tracing the Vignes sisters’ lives from the 1950s to the 1990s, all the way from the Deep South to California. Ahead of its release, Bustle spoke to Bennett about melancholy music, The Glass Hotel, and her next project.

On the books she’s been reading in quarantine:

I was struggling to concentrate on anything as soon as the lockdown began, but The Glass Hotel really shook me out of that and revitalized my attention span. The novel is about a Ponzi scheme and it takes you through all of these different characters who are involved: whether it's the person who organizes the scheme or its victims.

I also really enjoyed Actress by Anne Enright. It's about the daughter of a famous Irish theater actress. She’s grown up in the shadow of her famous mother and is now the bearer of her mother's legacy. It was really beautifully written and also just a complex mother-daughter relationship, which I really enjoy.

On her latest purchase:

I bought a whiteboard before the lockdown began. While teaching, I was always getting up and drawing things on the board when it came to structure or thinking about how stories are put together. I have a visual way of thinking about it that I didn't realize until I had to teach it to somebody else. Sometimes it's just a matter of being able to divide the whiteboard into different spaces, then writing what happens in each act of the story, or what happens in a chapter. Even just the physical act of having to get up and walk and write on the board, [instead of] sitting behind my computer helps. I finished a draft of a new thing and I'm going to organize [it], so I think that the whiteboard will be put to good use.

On seeking out melancholy music:

I remember listening to Frank Ocean's “Blonde” a lot when I was working on the book. I also remember listening to a lot of Lana Del Rey when I was writing Stella [the twin who passes as white’s] sections. That has been funny now in hindsight, but I think with both of those artists there's a melancholy to their music and that felt like the right mood for the book. That is something that I'm often kind of drawn to [when writing].

On her new self-care motto:

I've reached points in quarantine of just being like, "It's okay to be idle. It's okay to be still. I'm not going to judge myself for doing that." I'm not going to judge myself if I just want to binge-watch Dead to Me and not do anything else. I'm trying to keep that practice up as we shift out the lockdown. I want that to be a part of my writing life because I feel so harshly about the writing. I beat myself up when the writing is not good enough and that's just not a good way to go on.

On the desk item that inspires her:

Somebody made this really beautiful mug with copies of books by black women authors on it. My book [The Mothers] was one of the books on it and it was just so cool to see my book in the company of The Color Purple and Beloved and all these other things that I loved reading. I keep it on my desk when I’m writing.