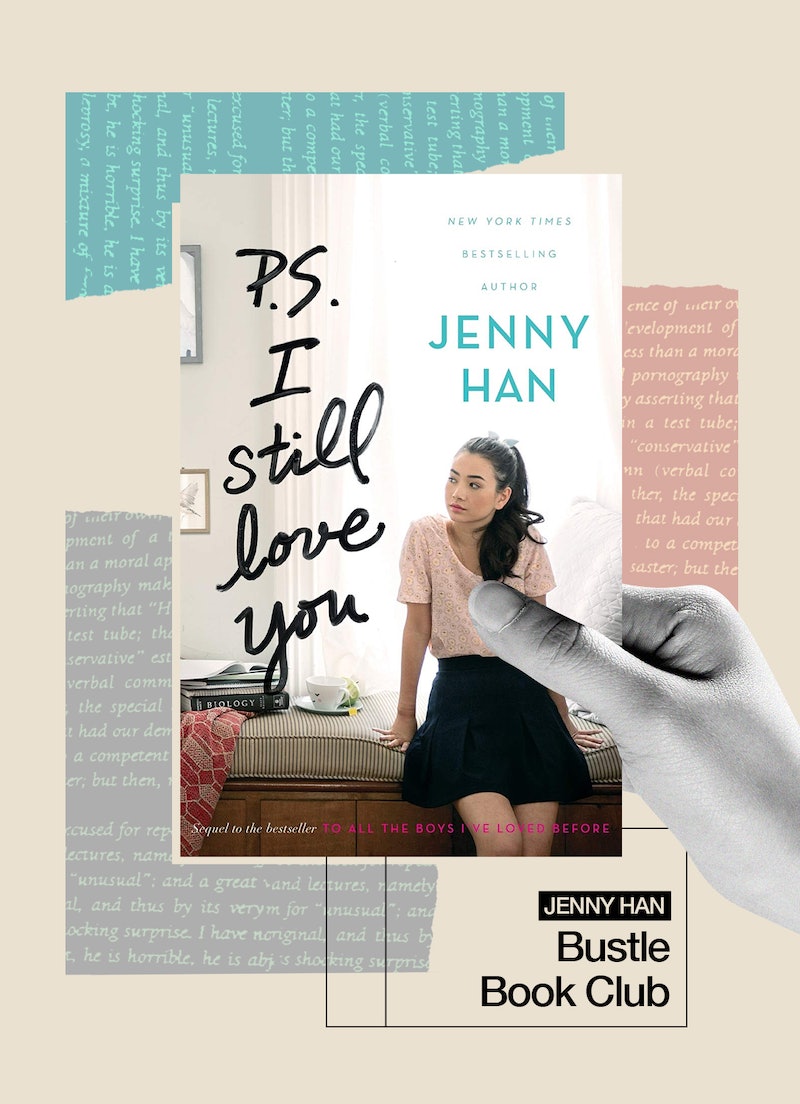 When the film adaptation of Jenny Han’s novel To All The Boys I’ve Loved Before first aired on Netflix in 2018, its impact on pop culture was seismic. Noah Centineo, who played Lara Jean’s love interest Peter Kavinsky, became a bonafide internet boyfriend with Instagram followers to match. Lara Jean’s drink of choice, Yakult, flew off the shelves. Women everywhere dressed as L.J. for Halloween. The movie became one of the streaming site's "most viewed original films ever," and adaptations of the following two volumes of the teen trilogy were quickly greenlit, with the first sequel dropping on Feb. 12.

Han was intimately involved in the first movie, and her fingerprints have already been spotted in the trailer for the next installment, thanks to Lara Jean's new obsession with barrettes and headbands. “I wanted there to be growth at the core of her personal style [in the sequel], so I was doing a lot of accessory buying," Han tells Bustle. For the first film, Han similarly presented a carefully curated fashion mood board to the film's wardrobe department. “Lara Jean is introverted, so the way she dresses is her way of expressing herself and being bold,” she explains of her commitment to ensuring the adaptation's authenticity. “I was telling the filmmakers, ‘It’s ‘90s Alicia Silverstone and ‘60s jumpers meets Asian streetwear.’”

Between serving as Lara Jean’s personal shopper, mood-boarding, and filming a brief cameo in the sequel, Han’s hands are full, but that hasn't stopped her taking on projects beyond the To All The Boys universe. She recently wrote an episode of Shonda Rhimes’ upcoming Notes on Love series and is in the throes of writing her next book.

For Bustle Book Club, we spoke with Han about her writing process: the fresh juices that fuel her, the One Direction song that inspires her, and the serums that soothe her after a day in the trenches.

On writing with friends — and with a view:

I like to rent a house somewhere fun. It could be somewhere like Jackson Hole, Italy, or Palm Springs, and then I get some of my writer friends together and we just hole up in the house and write all day. I always make sure there’s a hot tub so we can drink wine in it and relax and talk about the work we’ve done throughout the day. When I’m on a retreat I try to set goals for myself, like I’ll try to write 1,000 words in a day. Even just 500 words sometimes. I find [the experience] really propulsive because of the energy I’m getting from seeing other people working.

On what fuels her creativity:

Depending on the scene, I’ll listen to music. With this series I really liked that song, “Steal My Girl,” by One Direction. I listened to that a lot when I was writing P.S. I Still Love You. Also “Our House,” by Crosby, Stills, and Nash. That put me in the cozy headspace.

And when I’m in the throes of writing, I really like to have all of my beverages. I’ll have a soda and some sort of fresh juice that I sprinkle throughout the day so I have something to look forward to. But for a snack, a little cheese plate is always really nice.

On preferring notebooks to MacBooks:

There’s something really exciting about a blank notebook page, because it feels like possibility. To me, a blank screen feels more intimidating, like I haven’t done any work yet. On the page you can put arrows all over and move things around. You just feel more loose. When I go to Korea I always collect a bunch of notebooks. I like really thin, lined floppy ones that I can put in my purse and always have in there to write things down on really quickly. For a pen, I like to use those Pilot ones in fine, not extra fine. Oftentimes I’ll be jotting down dialogue or a scene idea and I’ll be editing on the notebook page.

On how she unwinds after a whirlwind day:

Baking. It’s very meta. As I was writing Always and Forever, Lara Jean I was really stressed out trying to make my deadline. It ended up becoming a big part of [Lara Jean’s] storyline. Another thing is skincare. If something feels a bit decadent, then I enjoy doing it more. That’s how it is with the nightly routine of putting on cleanser, toner, and all of my serums. I think that The Ordinary has some really good serums. I like Drunk Elephant and Tatcha. There’s a lot of Korean products that I like, too. Like AHC’s eye cream for your face.

More like this
Netflix Shut Down 'Bridgerton' S3 Rumours About A “Very Dark” Storyline
By Bustle
Your Guide To Watching 'Everything Everywhere All At Once' In The UK
By El Hunt and Sophie McEvoy
Kukulkan From 'Wakanda Forever' Has A Surprising Connection To Marvel History
By Grace Wehniainen
Rupert Grint Just Shared A *Major* Update About Ron Weasley’s Future
By El Hunt
Get Even More From Bustle — Sign Up For The Newsletter
From hair trends to relationship advice, our daily newsletter has everything you need to sound like a person who’s on TikTok, even if you aren’t.