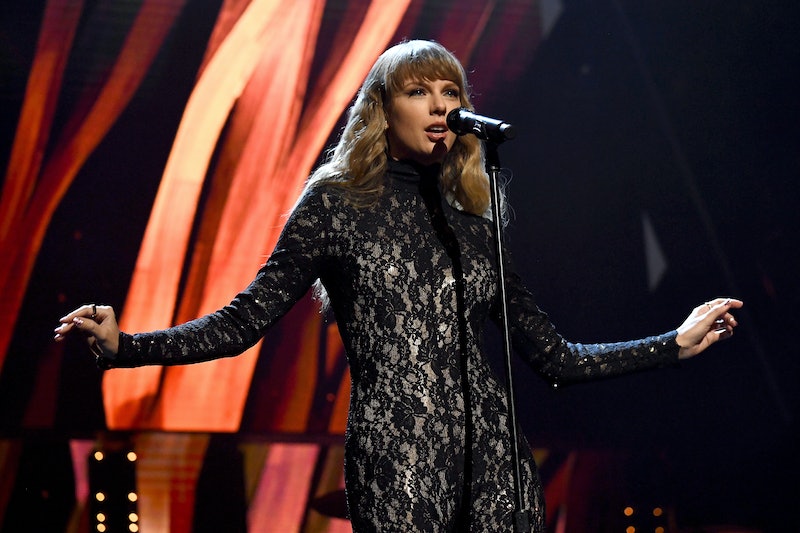 If there’s one thing Taylor Swift loves more than her cats, it’s fall. As she explained in a 2014 Tumblr post, which she recently re-enacted on TikTok, she loves “hats and scarves and knee socks and wearing tights for the first time in months, and when the morning are all chilly and you can see your breath and draw little pictures on foggy windows.” That’s not it. She continued: “And plaid stuff and winter boots and not caring when people make fun of pumpkin-flavored stuff because you love it, and people who dress their dogs in costumes on Halloween, and fire in fireplaces, and maroon/hunter green/mustard yellow color combos, and baking your first fall batch of cookies but you put too much cinnamon in it because you’re too excited because it’s fall.”

As with most things in her life, Swift’s love of fall is reflected in her lyrics. Truly dedicated Swifties have noticed autumn references in nearly every one of her albums, even ones like 1989 that feel too bright and sunny for fall weather. Whether she sings about new Septembers, falling leaves, or the holidays, there’s a Swift lyric for every fall occasion, making them the perfect soundtrack (or Instagram caption) to the fall memories you cherish — and the moments that haunt you.

To celebrate Swift and her “basic autumn lovers,” as she lovingly called fans on Instagram, here are 13 of her warmest, comforting, and haunting lyrics that describe fall perfectly.

“But I can see us lost in the memory / August slipped away into a moment in time, ’cause it was never mine”

As Swift says on this standout track from Folklore, August was never hers, given how summer love always sparks fast and burns out even quicker. But you know what is hers? Fall.

“Windows swung right open, autumn air / Jacket ’round my shoulders is yours”

Is there anything more lovely than autumn air? Maybe walking on a fall evening with your significant other’s jacket wrapped around your shoulders. Fall doesn’t require a lover, but Swift makes it sound so much more romantic with one by your side.

“Past the pumpkin patch and the tractor rides / Look now, the sky is gold”

Swift wrote “The Best Day” as a tribute to her mother, but honestly, it could also be a tribute to the joys of fall. Going on a tractor ride in a pumpkin patch as the sky turns gold sounds like the definition of “the best day” to us.

“The holidays linger like bad perfume / You can run, but only so far”

When Thanksgiving rolls around, you know you’re in the thick of fall. The holidays can bring back joyful family memories, traumatic moments you’d rather not relive, or even a former flame, as Swift poignantly sings on this Evermore standout, which is already a holiday classic. No matter what the holidays mean to you, ’tis the damn season.

“I watched you laughing from the passenger side, and realized I’d loved you in the fall”

Just like when summer turns into fall, love can burn out when autumn becomes winter, as Swift mournfully reminds us on this ballad.

“I recall late November, holding my breath / Slowly I said, ‘You don’t need to save me, but would you run away with me?’”

While “Back to December” reminds us that snow can melt even the strongest of flames, “Call It What You Want” proves that fall can also strengthen it, as lovers become family during the holidays. And yes, most Swifties would run away with Swift if she asked.

“Light pink sky up on the roof / Sun sinks down, no curfew”

Nothing says fall like reuniting with your classmates and skipping your homework in favor of sneaking on your roof (insert concerned dad joke here) and watching the sky change colors. It’s nice to have a friend, indeed.

“Loving him is like trying to change your mind once you’re already flying through the free fall / Like the colors in autumn, so bright just before they lose it all”

Swift has always been correct: Loving someone is red. And nothing is more red than autumn leaves just before they fall to the grass, representing how love can fall apart just as quickly and passionately as it began.

“Skies grew darker, currents swept you out again / And you were just gone and gone, gone, and gone”

Admittedly, 1989 is more of a summer album (or winter if referring to the skiing accident in “Out of the Woods”), but “This Love” is pure fall, as the sky gets darker earlier and you question your summer love more than ever.

“Lost again with no surprises / Disappointments, close your eyes / And it gets colder and colder, when the sun goes down”

The key sign that fall is about to begin is when you’re no longer sweating at night on the Coney Island ferris wheel, as Swift delicately points out on her stunning duet with The National. New York’s carnival isn’t nearly as fun when it’s cold outside, but other fall pleasures await.

“Innocent” is underrated by the entire world, even Swift herself, who has only performed it live once at the 2010 Video Music Awards. Sure, it was written in response to Kanye West’s infamous VMAs incident, which is something no one ever wants to talk about again. But more than anything, “Innocent” captures new beginnings and the spirit of forgiveness and generosity that comes with fall better than any other song could.

“Show me a gray sky, a rainy cab ride / Babe, don’t threaten me with a good time”

Is there anything more quintessentially fall than rushing to get a cab in the rain so your favorite autumn boots don’t get ruined? Actually, that’s a typical Tuesday in London, as Swift sings on this ode to British boyfriend Joe Alwyn. But still, it applies to autumn activities as well.

“All Too Well” is not only the definitive breakup anthem of our generation to Swifties — it’s the definitive song of fall, even for some non-Swifties. From the autumn leaves falling to the scarf Swift left at her ex’s sister’s house, every lyric in this devastating track (and Swift’s best song, according to Rolling Stone) just screams “fall” in its purest form.

This article was originally published on Sep. 7, 2015