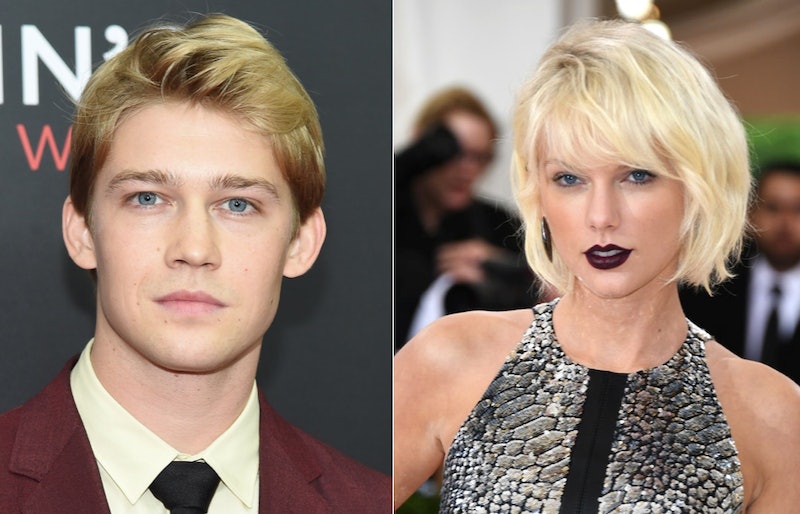 Taylor Swift is known for writing emotional songs about her relationships, and as you might have noticed, she's been singing a lot less about personal heartbreak lately. Fans have boyfriend Joe Alwyn to thank for that, but there's only one problem: So much of their relationship is a mystery. However, a timeline of Swift and Alwyn's relationship milestones (at least the ones we know of) could help clear things up if you're just as curious as the rest of us who are rooting for them to live happily ever after.

folklore and evermore don’t touch upon Swift’s actual relationship, but Alwyn's importance in her life looms large in Reputation. In songs like "Call It What You Want" and "New Year's Day" that are filled with hints about their love story, it's obvious that this relationship is A Very Big Deal to her. Alwyn will probably stick around for a while, so how did their story begin? What has their dating life actually been like? And will they virtually appear together for the 2021 Grammys? Whatever happens between the two, rest assured you can find the biggest moments from their relationship right here:

According to the lyrics of "Dress," Swift and Alwyn may have met at the 2016 Met Ball. In the song, she sings, "Flashback to when you met me, your buzzed cut and my hair bleached." At the Met Gala, Alwyn's hair was, indeed, buzzed, and Swift's hair was, indeed, bleached. There's no confirmation on this beyond the lyrics, but it's as close as we may get. Swift and Alwyn didn't get together right after meeting, though. At this point, Swift's breakup with Calvin Harris had not yet been reported, and she had not even started dating Tom Hiddleston.

Reports Of Their Relationship Surface — May 2017

It wasn't until a year after they met that the first rumors of a romance between Swift and Alwyn surfaced. According to a report in Metro, they'd been dating for a while at that point, but they wanted to keep things as quiet as possible.

They're Spotted In Public For The First Time — June 2017

Swift and Alwyn were seen in Nashville, looking pretty happy and generally cute together. This earliest sighting was a pretty big deal since Swift hadn't been rumored to have been dating anyone since her ill-fated fling with Tom Hiddleston.

Supposedly, Swift wanted fans who attended her private Reputation listening parties to spread the word to other fans that her love songs on Reputation, including “Gorgeous,” are about Alwyn. It would make sense, especially with "Gorgeous," as it's a cute song about having a crush on someone at first sight. That’s yet another tidbit that she hasn't confirmed directly, but such is life when your favorite celebrity couple won't share any solid information about their relationship.

Reputation Drops And There Are Finally Details — October 2017

Since the album was released in October 2017, fans have been trying to decode how much of the album is about Alwyn... and a fair amount of the lyrics definitely seem to apply. Since the couple refrains from spilling any substantial details, the specifics will remain a mystery.

Fans spotted Swift and Alwyn at the Capital FM Jingle Bell Ball soiree in London in late 2017. As fate would have it, the pair were reportedly dancing to Ed Sheeran’s onstage set. (Die-hard fans know that after Swift revealed Alwyn is the subject of “Gorgeous,” Sheeran, who featured on Reputation, gave his approval, saying, “He’s a cool dude.”) In addition to their dancing, attendees apparently saw and tweeted about Alwyn and Swift slow dancing and kissing.

It only took two separate pictures of Swift and Alwyn standing solo in the desert to help paint a better picture of their intensely private relationship. In May 2018, they both posted photos on their Instagram pages one day apart, and observant eyes took note of what appeared to be the same cactus plant next to Swift and Alwyn in their individual snapshots. As obvious as the connection seemed to their followers, Alwyn later told British GQ that he and Swift didn’t post their desert romp photos to give people more insight into their relationship. “I didn’t even think of it until I was in New York and someone else mentioned it,” he stated in October 2018.

For the first time since rumors of their relationship took hold, Alwyn publicly spoke about Swift, choosing British Vogue as the publication to break his silence. Still, he didn’t disclose much information at all — not even Taylor’s name. He said, “I’m aware people want to know about that side of things. I think we have been successfully very private, and that has now sunk in for people. But I really prefer to talk about work.”

During a year of four film releases, Alwyn spoke about his appearances in those projects and gave hungry fans a few more crumbs about his relationship with Swift. He told Esquire in 2018 that he refused to seek any outside advice while dating Swift. “I know what I feel about it. I think there’s a very clear line as to what somebody should share, or feel like they have to share, and what they don’t want to and shouldn’t have to,” he said.

The same month that interview was published, Alwyn and Swift attended the Mary, Queen of Scots movie premiere in London. The Evening Standard reported that the two were “photographed attending the after-party by Alwyn’s costar Izuka Hoyle” and added that Swift made a “low-key appearance” at the fête.

Swift And Alwyn Get “Flirty” At The Golden Globes — January 2019

A source told Entertainment Weekly that Alwyn got a “little flirty” with Swift as she presented the Best Original Score and Best Original Song in a Motion Picture awards alongside Cats costar Idris Elba at the 2019 Golden Globes. The source said, “While Taylor presented, Joe watched the teleprompter near him and smiled and [his The Favourite costar] Nicholas Hoult patted him on the back. After [Lady] Gaga walked on stage, Joe shifted his gaze to the stage near Taylor. She was smiling at him while she walked off stage. She looked over her shoulder and gave a sassy cute little smile at his table’s direction.” The two were also reportedly seen kissing at Fox’s Golden Globes after-party. But alas, there are no pictures for evidence of this.

For their next public outing, the couple attended the British Academy of Film and Television Arts after-party. Elle noted that the night marked the first time they posed for photos together at an awards season event.

Following Swift’s Saturday Night Live performances, she and Alwyn made their way to the SNL after-party together. And lucky for fans, the pictures were pretty clear this time.

Alwyn made an almost-full cameo in Swift’s Miss Americana documentary. Cameras caught brief glimpses of Alwyn and what Swifties surmise is the actor hugging and kissing Swift. Both Swift and Alwyn have spoken about the importance of keeping their relationship private, so it’s no surprise they didn’t share more on film. In an August 2019 interview with The Guardian, Swift stated that their relationship “isn’t up for discussion.” She adds, “It’s just that it goes out into the world. That’s where the boundary is, and that’s where my life becomes manageable.”

They Collaborate On folklore and evermore — November & December 2020

Much to the delight of her fans, Swift and Alwyn collaborated on her folklore and evermore albums. In November 2020, Swift confirmed that her boyfriend was the person behind the infamous “William Bowery” pseudonym who co-wrote “exile” and “betty” from folklore and three tracks heard on evermore, including the title track, “champagne problems,” and “coney island.”

“I say it was a surprise that we started writing together, but in a way, it wasn’t because we have always bonded over music and had the same musical tastes,” she told Zane Lowe. She also divulged that she and Alwyn have a true affinity for sad songs and eventually found themselves writing the “saddest” ones.

At the start of 2021, Elle reported that Swift and Alwyn were seen taking a walk with his mom in London. The celebs were bundled up in their coats and wore face masks amid the COVID-19 health crisis, leading people to believe that the pair is quarantining together.

There are still many blanks that Swift and Alwyn have yet to fill in, but it’s clear they’re still going strong and will share any details they are comfortable with on their own terms.

This article was originally published on Jan. 27, 2018