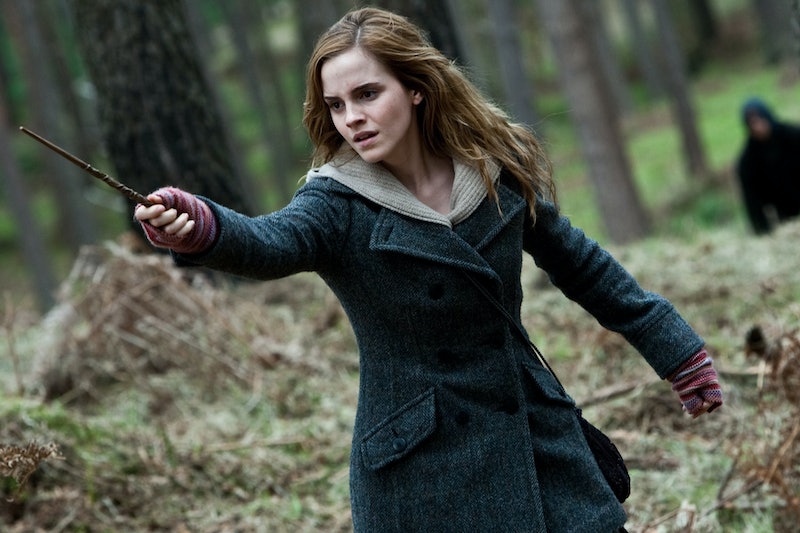 J.K. Rowling may have constructed an entire wizarding world around “The Boy Who Lived," but the women in Harry Potter are essential to that boy and the universe he occupies. All seven books in the series are packed with female characters who make things happen and shape the story: teachers, students, warriors, villains, and philosophers who together make Harry Potter one of the most feminist YA series of the last several decades.

Yet when the books were adapted into a film franchise, concessions had to be made. Whether for the sake of time, budget, or streamlining the story, the roles of some female Harry Potter characters were truncated and their impact lessened. (Peripheral male characters were sacrificed too, to be fair.) But even without the luxury of thousands of pages of narration, the Harry Potter movies still feature an abundance of powerful women for fans of all ages to love, hate, and cosplay. This list ranks the female characters of Harry Potter on-screen in order of character development, from the borderline neglected to the palpably real.

Hermione's muggle parents are far removed from the main action of the story, so it's hard to fault the movies for sidelining Mrs. Granger. What little fans know about the witch's mother includes her full support of her daughter's magical education, which is why it's so heartbreaking to watch Hermione wipe her mom and dad's memories to keep them safe in Deathly Hallows.

Romilda Vane is cast squarely in the "vixen" role in the films. Worse still, she's a vixen who never even speaks. Still, I've got to give her props for going after the boy she wants (even if she essentially tries to drug him) and for fighting alongside her classmates in the Battle of Hogwarts.

In what little screentime she has, Angelina makes a name for herself as a skilled Quidditch player and witch who somehow sees through George Weasley's Peter Pan complex to notice his real value.

10 points to the Hogwarts Herbology professor for not coddling Neville Longbottom in Chamber of Secrets after he's shocked into a faint by a mandrake.

Pansy simpers after Draco Malfoy, and also evidently goes to class once in a while. She's much nastier and more fun in the books.

Lavender has it real bad for Ron and shows it by being a Stage 5 Clinger. Her role in the movies is to provoke Hermione's jealousy, and she dies at the hands of Fenir Greyback before she can leave her teen obsessions behind.

Poor Katie Bell's most notable scene is the one where she's possessed by a cursed necklace and tossed around like a rag doll by an unseen force. But she's also a chaser on the Gryffindor Quidditch team and a founding member of Dumbledore's Army.

The Hogwarts school nurse is a no-nonsense woman who suffers no fool — least of all sniveling Slytherin fools.

Madame Hooch all but disappears after Sorcerer's Stone, but never forget that she could fly circles around any 17-year-old boy on that Quidditch pitch.

The Grey Lady's story (murdered at the hands of a jilted lover, the Bloody Baron) is an important cautionary tale about toxic masculinity that was unfortunately shortened for pacing purposes. She does provide Harry with her mother's diadem, assisting in the eventual defeat of Lord Voldemort.

Besides being DA members who are smack in the middle of the fray in the Battle Of Hogwarts, the Patil sisters also refuse to act like they're enjoying their dates with a couple of boys who are completely ignoring them at the Yule Ball in Goblet Of Fire.

Madame Maxime became the highly respected Headmistress of Beauxbatons Academy, even though the wizarding world has a prejudice against giants and giantesses.

Lily exists in the memories of the people who loved her. Much of Harry's character also comes from her single most important act of love: stepping between him and Voldemort's wand.

After her boyfriend Cedric Diggory and is killed by Voldemort, Cho shows resilience and determination by joining up with the DA to bring him down.

What a pill, but you've got to respect her tenacity.

If the Ginny Weasley from the books had made it to the films, she'd be ranked much higher. As it is, the movies skip over a lot of Ginny's development, including her elite Quidditch status and her unapologetic serial dating.

The silver lining of dying young in the Harry Potter world? Haunting the locker room and sneaking a peek at the living.

Practiced and determined, Fleur is a fierce competitor in the Tri-Wizard tournament. The movies also play down her vanity, making her a much more relatable character.

Professor Trelawney is considered to be a kook by many of her friends and colleagues. But the later films show her to be more connected to the spirit world than maybe she even thought.

Narcissa is a conflicted woman, and that makes her compelling. She pledged herself long ago to something that suddenly doesn't seem so important anymore. As Draco's safety and future begins to outweigh all other concerns, her humanity shows through the cracks.

I would have loved a 10-minute scene between Harry and his aunt in which they drop all pretense and try to understand one another. There's so much shame, guilt, and anger bubbling below Petunia's prim surface; I wish she'd given up just a little more of her inner self.

Bellatrix has no moral compass to speak of, just the kicks she gets from causing others pain. Voldemort's No. 1 fan is completely unhinged and a total joy to watch.

Even without her rainbow of hair colors, Nymphadora Tonks would have been the coolest chick in the Harry Potter canon. Remus Lupin tries to decide what's best for her, but she demands her agency and gets her man. And she shows Harry and his friends what a service it is to be an Auror, inspiring some future careers. Rest in peace, Tonks.

Female characters don't have to be likeable to be well-developed. Umbridge is more loathsome than even Voldemort, but man, she's a huge presence. She's made up of bigotry, fear, and a hunger for power. Her methods border on sadistic. Her comeuppance, therefore, is delicious.

It takes a big personality to be known as the "weird girl" in a school full of witches and wizards. Luna Lovegood is the poster child for being yourself and knowing that the people who really matter will have no trouble seeing your value.

Molly Weasley is a straight-up queen. She runs a tight ship at the Burrow, but she instantly opens her heart to her son's orphaned friend. She's a remarkably powerful witch whose chosen career is to put her skills to work to raise a family. And do not mess with any of her kids, because she will put a hurting on you like you would not believe.

My only complaint about Minerva McGonagall, the source of tough love for generations of budding wizards and witches, is that she has zero personal life. Workaholic tendencies aside, McGonagall is the rock of Hogwarts. She's just as wise as Dumbledore but without the flightiness. That school wouldn't be standing without her.

The brightest witch of her age! Hermione Granger has such an arc over the course of the eight Harry Potter films. She comes to Hogwarts ready to put her head down and get to work, but quickly adapts to a world that sometimes requires more action than study. Hermione doesn't drop her own interests completely, though; it's her exhaustive reading that saves Ron and Harry's skin plenty of times. She's just as strong as she is smart. Ron mopes about her date with Krum, and Hermione reminds him that he has no claim over her. She doesn't prize compassion over victory and encourages her friends to stop and think before they storm into danger. And she bloodies Malfoy's nose after he dares call her a "mudblood." Hermione wasn't even born into the wizarding world, but she walks around it like she owns the place.