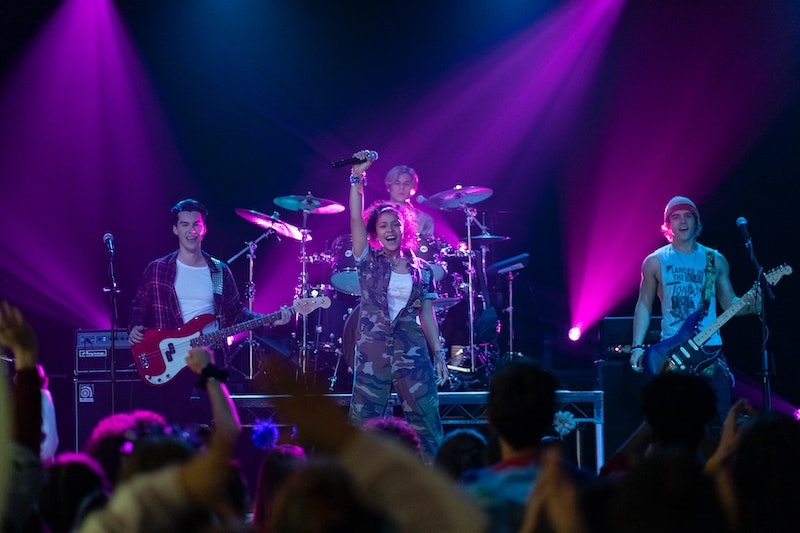 We all have times where we're feeling low. Whether you're having a bad day, a bad week, or even a bad year, you probably know that feeling where cuddling up on the couch seems like the only cure. However, tuning into Netflix and marathoning your favorite television show actually can end up helping cure your bad mood. Because, aside from providing you with endless hours of entertainment, the content on the popular streaming service can also give you that much-needed boost. Yep, certain TV shows and movies on Netflix can give you confidence.

Hear me out for a second. While, yes, different stories may allow you to escape from your day-to-day life, certain characters can also reflect the struggles you're going through. Storytelling places a mirror on our problems, relationships, and fallouts — and that's where it can actually help turn things around. By watching someone else overcome their challenges, you may be inspired to overcome your own hardships.

While hiding inside may make you feel safe, the confidence of the characters in these TV shows and movies can help pick you up. And before you know it, that mindless decision to stream something on Netflix may actually be responsible for helping to propel you forward. Here are the things you should watch on Netflix if you're looking for a boost in your confidence.

Kimmy Schmidt (Ellie Kemper) lives for brightening your day. If Kimmy can survive living in a bunker and take on life in New York City, then you can do anything you set your mind to. —Michelle Lulic

2. Julie and the Phantoms

Watching Julie (Madison Reyes) find her voice in this musical dramedy is a lovely and heartwarming tale. And the fact that she does it while backed by a band of hunky ghosts only makes it that much better. —Sadie Gennis

Living in a family member's shadow is never fun — but it certainly won't stop you from being you. The empowering CW series is bound to have you to saving the world by the time your marathon is up. —Michelle Lulic

If Miranda Sings can push past the haters, so can you. This Netflix Original will give you one fearless attitude — no matter what anybody else has to say. —Michelle Lulic

Watching Tan, Jonathan, Antoni, Bobby, and Karamo help heroes find their own self-confidence and self-love can be just as healing for viewers. But just make sure you have a box of tissues handy, because there will be tears. —Sadie Gennis

6. Never Have I Ever

Devi (Maitreyi Ramakrishnan) is determined to change her social status going into her sophomore year of high school. So, she summons up her confidence and sets out to build the life she wants for herself in this charming comedy that isn’t afraid to go deep. —Sadie Gennis

There's nothing that can't be fixed with some quick wit and a much-needed cup of coffee. A night in with Lorelai, Rory, and Emily Gilmore can bring confidence and camaraderie to women of any generation. —Michelle Lulic

After Jenny’s (Gina Rodriguez) boyfriend dumps her right before she’s set to move away, she decides to have one final adventure with her two best friends (played by Brittany Snow and DeWanda Wise). An anti-rom-com rom-com that celebrates the power of female friendships, Someone Great will remind you that whenever you’re struggling, you still have a community of people behind you to raise you up. —Sadie Gennis

Rebecca Bunch (Rachel Bloom) hits several rock bottoms in this musical dramedy series. But as she deals with endless drama in her (very messy) love life, issues at work, and with her own mental illness, Rebecca resiliently finds her way toward self-compassion and self-confidence until she finally becomes the version of herself she’s always wanted to be. —Sadie Gennis

For many, Elle Woods (Reese Witherspoon) has become the face of women defying expectations and doing things their own way. So when life tells you no, watch Legally Blonde and remember that you can do anything you want to — and look fabulous while doing it. —Sadie Gennis

11. To All the Boys I’ve Loved Before

Lara Jean Covey (Lana Condor) is a shy teen who learns that love letters she’d written but never meant to send were somehow mailed out. But in the wake of the mortifying accident, Lara Jean finds love and self-confidence in this sweet rom-com trilogy. —Sadie Gennis

Jane Fonda and Lily Tomlin star as two women who form an impenetrable friendship after their husbands leave them for each other. Heartfelt, hilarious, and highly bingeable, Grace and Frankie will make you excited to grow older and remind you to embrace your strengths at any age. —Sadie Gennis

Starting something new often brings out insecurities. So when you need an extra jolt of confidence before embarking on a new adventure, we recommend watching Beth (Christina Hendricks), Ruby (Retta), and Annie (Mae Whitman) ditch their lives as suburban moms to reinvent themselves as criminals. Maybe not the best role models, but this trio are empowering and entertaining as hell. —Sadie Gennis

This article was originally published on November 23, 2016