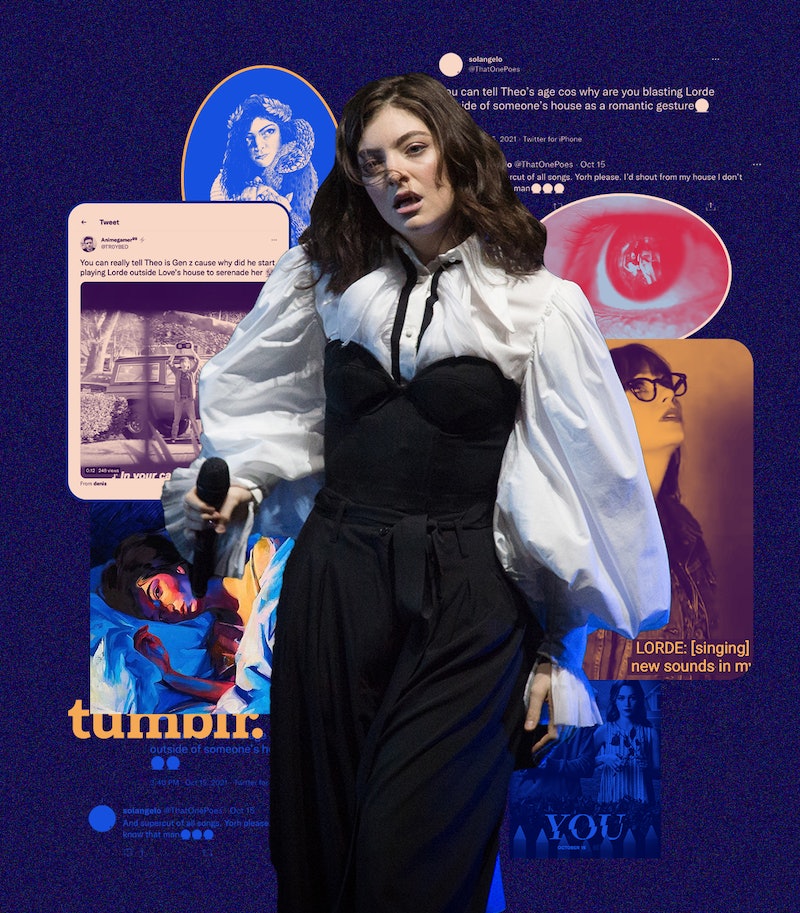 There’s a moment in Season 3 of You, when “fem-gen major” Theo serenades Love (played by Victoria Pedretti) Lloyd Dobler-style. Where this bedimpled youth obtained a boombox is a question for another time, because what’s even more striking is the song choice. Dobler went straight for the mushy ‘80s ballad — Peter Gabriel’s now-iconic “In Your Eyes” — but Theo goes for a post-ironic breakup banger, blasting “Supercut” by Lorde until Love comes running. He’s being a little facetious — “According to all the rom-coms of your generation, this is what the guys do to get the girl,” he says with a shrug — but there’s also some earnestness in his yearning for the hot-mom murderer next door. On Twitter, many fans loved it, though some were a little confused. Why did an electro-pop song about heartbreak fit this moment?

This isn’t Lorde’s first time serving as TV shorthand for an emotional climax with a complicated denouement. When Jess and Nick finally got together in New Girl, Lorde’s “Green Light” scored the moment, while Euphoria’s special episode about Jules, which aired earlier this year, was soundtracked by “Liability.” So broad is the spectrum of Lorde’s omnipotence that “Supercut” not only served as the inspiration for Jennifer Kaytin Robinson’s 2019 Netflix movie Someone Great, but also provided dramatic gravitas in FIFA 2018. One further point of anecdata as to Lorde’s emotional resonance: as I was outlining this story, a mid-sized sedan drove past my apartment building blasting “Royals” so loudly my windows shook.

None of that quite explains why Lorde feels so potent right now. Part of me wonders if this latest appearance on You, which pushed a spike in searches for the New Zealand singer, made people nostalgic for Lorde’s truly transcendent earlier work (since Solar Power was, well, fine). But another part of me, the one that spends too much time on TikTok, would offer a different, more authoritative explanation.

One of the more hyperspecific trends on TikTok right now is nostalgia for — of all things — the aesthetic of being on Tumblr in 2014. Videos with the hashtag #2014Tumblr have over 90 million views — that’s more than #GreatResignation and #SadGirlFall combined. A viral late-September TikTok explaining why it girls are wearing wired headphones again tied that fad to the “2014 Tumblr aesthetic.” This word salad actually means something: Per TikTokers, this vibe, as it were, is a combination of soft grunge and indie sleaze, as signified by wearing American Apparel clothing and combat boots, or conspicuously using Polaroids or playing vinyl records. (I can back this up personally from having been an active Tumblr user circa 2012.) Basically, whatever you remember from shopping at Urban Outfitters in the mid-2010s is cool again. For now.

“It’s a contracted nostalgia cycle that mirrors the contracted trend cycle,” trend forecaster The Digital Fairy said in a late-October TikTok. “We tore through Y2K and early 2000s fashion with swiftness and ferociousness. So not only are the 2010s nostalgic in a weird way, they’re also the only thing we have left that hasn’t been chewed up and spit out by the trend cycle.”

The nostalgia that gets set off when “Green Light” comes on through my own Apple Music isn’t unique to Melodrama, either. A few weeks ago, I was getting ready to go to a friend’s birthday party when an extremely specific desire to listen to M83’s “Midnight City” came over me, so strong it was like a food craving. Leaving a restaurant this past Friday night, Robyn’s “Dancing On My Own” — the emotional predecessor to “Supercut,” if ever there was one — began playing over the outdoor loudspeakers, triggering an impromptu dance party of one. And you can scarcely go on the internet this week without hearing about Red (Taylor’s Version), the rerecording of the singer’s seminal 2012 album, this time featuring a cameo from 2021’s coolest sad girl, Phoebe Bridgers.

Even though Melodrama came out in 2017, it’s hard not to feel like Lorde’s work is synonymous with this mid-2010s mood. “Lorde makes me nostalgic for being a teenager who feels happiness and heartbreak at unnerving extreme levels,” a friend texted when I asked one of my group chats what her music means to people our age. The sample group chat I consulted consists of people who were also derogatorily called hipsters in high school, so you could say that artists like Lorde — and M83, and Robyn, and Taylor Swift — are deeply bound up in our memories of that particular era. Plus, Lorde began writing Melodrama in 2014 and even conducted a 2015 Q&A with her fans via Tumblr, so I like to think she was probably there with us.

Perhaps, then, Lorde serving as the soundtrack for that Lloyd Dobler moment is more on the nose than we realize. Director Cameron Crowe chose “In Your Eyes” for Say Anything after he reheard it on his own wedding music cassette. When the movie came out in 1989, it rang that same, kind-of-recent-nostalgia note I hear in Lorde. A few weeks back, I was walking down my Brooklyn street when “Green Light” came on shuffle. My response was Pavlovian; I was instantly transported back to a period of my life when I would walk to or from house parties listening to Ella Yelich-O’Connor’s euphoric heartbreak, absolutely zooted on Jack Antonoff-inflected serotonin. It’s not that I want to return to those times — like Lorde, I am in my Solar Power era and no amount of money could make me go back — but in times of uncertainty, recent nostalgia reminds us that everything comes back around, and sometimes it’s a hell of a lot sooner than you think.