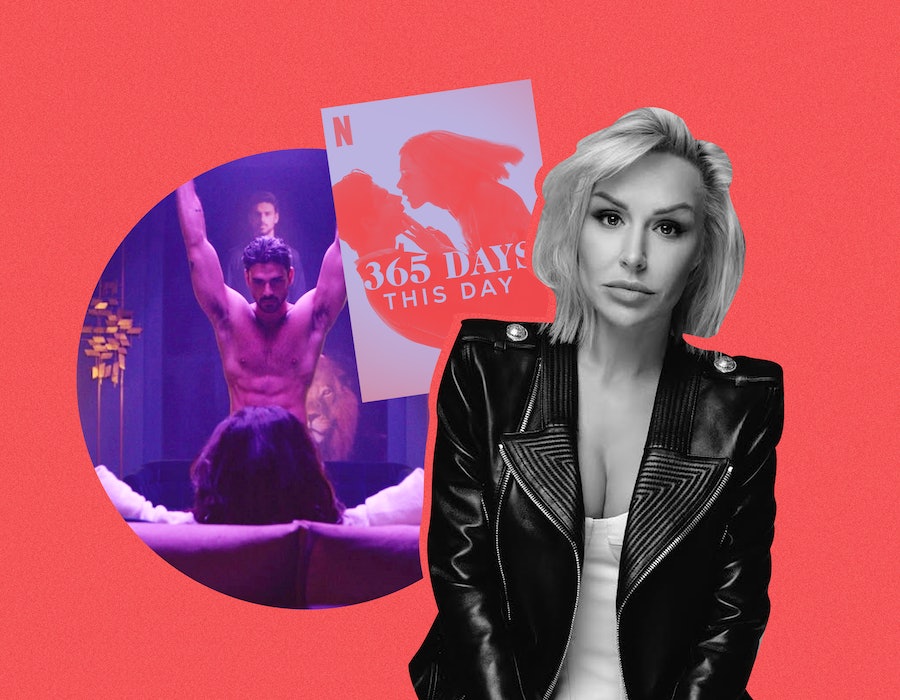 Now, with the third and final film in franchise newly available to stream — and the corresponding book being published in the US in September — 365 Days’ author has a message to her detractors. “All the women in the entire world who shouted so loud about women’s rights and how bad my book is for women, I'm waiting them to come to me and say, ‘Sorry, I was wrong,’” Blanka Lipińska tells Bustle of how she hopes people will perceive the conclusion of her trilogy.

Lipińska published the first 365 Days, which followed the relationship between Sicilian Mafia boss Massimo and Polish hotel manager Laura in Poland in 2018. The book begins with Massimo kidnapping Laura and giving her one year to fall in love with him before he’ll free her. It’s a controversial conceit, but one that Lipińska argues is no more problematic than the plot of Beauty and the Beast. “It’s the same story. So maybe we [should] focus on the cartoons of Disney, because what kind of independence [do the women in those films] have?” says the 37-year-old, adding that both 365 Days and Beauty and the Beast should be viewed as cautionary tales. “Small girls watch these cartoons and think, ‘Oh my God, I want to be a princess. I want to have a prince on the white horse.’ No, you [should] want to have your own castle because you will have money to buy this castle.”

Whether or not the third book will drive this message of female independence home and redeem the series in the eyes of Lipińska’s critics remains to be seen. (The fact that the final film is radically different than Lipińska’s book likely won’t help her cause.) But when Lipińska first set out to publish her book, she had another goal in mind: to expand the limits of erotica. And with tweets about the film like, “It made 50 Shades look like a Disney movie, MY GOD,” it’s safe to say she succeeded. “I started a revolution in my country. But at the same time, people were in shock, like, ‘How dare you to talk about sex like that?’” she recalls. “I say, ‘I don't give a fuck.’ So I hope that my book, my interviews, and how I talk about sex will give woman the bravery to make their [sex] life better.”

Below, Lipińska talks intimacy coordinators, her role in directing the film’s sex scenes, and contemporary erotica.

Before 365 Days, you were managing a nightclub. Did you always want to be a writer?

The book [I wrote stayed] in my computer for years. My friends read it, friends of my friends, and all the girls said, “Oh my God. When will you publish the book?” But I didn't feel comfortable showing people what was inside of Blanka Lipińska. Then after three years I grew up and said, “I don't give a fuck.” I published that book because I was so pissed off that the book stores didn’t have any good erotica to read.

What was it about contemporary erotica that you were so unimpressed by?

I was just tired of the language the writers used in the books. Like when you have a dick, you have a dick. Not “a big piece of wood in his trousers.” Or [people would write] peach, not pussy. It’s not a peach! Peach is a fucking fruit for your kitchen. Your pussy is your pussy, your dick is a dick. I also wanted to give woman a voice to talk about sex in their relationship. You have to know what turns you on and this was the most important thing for me when I published my book.

365 Days was first introduced to American audiences as a movie. How involved were you in the film’s production?

It was very bad idea for the movie crew [to invite me] because when we made the first film, I was the most powerful person on the set. I decided about everything. I also directed the sex scenes. And let's be honest. [The sex scenes] are the value of that movie. Because people love that it's so real. It's not, but what we created [seemed] so real.

The boat scene — where Massimo and Laura sleep together for the first time, and then proceed to have sex on every square inch of his yacht — has become one of the most talked about sex scenes in recent history. Walk me through directing that sequence.

From the beginning, I want to know my actors. I spent weeks [with them]. Michele [Morrone, who plays Massimo] came to Poland for two weeks before we started shooting and he lived in a hotel, but he was bored in the hotel so he stayed in my house. I talked with him [and Anna-Maria Sieklucka, who plays Laura] very honestly about my sexual life. We talked a lot about our sexual preferences, what we like, what we don’t like. So when we started shooting sex scenes, it was in the end of the shoot, because it's the most important thing that the actors feel comfortable with each other.

So then we had a rehearsal, only the three of us in a safe place, and we decided what kind of emotion we want to put inside of scene. Then we went on the boat and I said, “You will start the sex in a dominant way, after that we have to do that position and that position. Then it's totally yours guys. It's a freestyle. Show me what you got.” So they did it like three times and they exactly know what I want to see on the screen. Even when [Michele] did that thing...

Spit on her vagina?

Yes! Because when we talked one day about all these things I said, “Oh my God. I love when a guy does that.” And he said, "Okay, I will do that for you." It's super cool, because it's funny for us to make it. But on the screen it was so fucking sexy.

You’re obviously very hands on in these sex scenes, but do you also have an intimacy coordinator on set?

On the second and third films we had one. Of course, this is the rule of Netflix and we respect the rules, but I think we know each other so well and we are so honest on the set with the actors that the job of the intimacy coordinator, in the first movie, was my job.

When the first film came out, the internet was divided. People loved it, but it got a 0% on Rotten Tomatoes. It was Netflix's most watched film, but people were calling for Netflix to remove it. How did you handle the reaction?

Despite all the fanfare and controversy, will you write another book?

Probably, because my fans really love that story and they want to know everything about that story. So I decided to give them a book number four. This story will be from the point of view of Massimo. What was happening inside of Massimo when he met Laura? When he kidnapped her? The fans are very curious and I want to give them that story.

More like this
At 28, Prue Leith Was In A Secret Affair & Sharing Apple Pie With Stoned Neighbors
By Grace Wehniainen
Taffy Brodesser-Akner Can Write Anywhere — Even The Bathroom At Bloomingdale’s
By Samantha Leach
Here’s Everything Coming To & Leaving Netflix In December
By Jake Viswanath
Dodi Fayed Produced Movies Starring Robin Williams & Demi Moore After 'Chariots Of Fire'
By Brad Witter
Get Even More From Bustle — Sign Up For The Newsletter