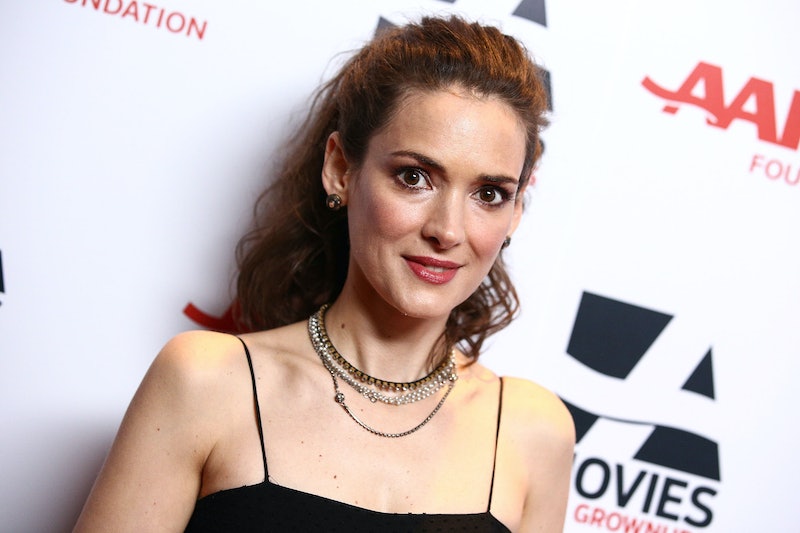 There are only three woman I would trust to play me in a movie. The first two are Sarah Michelle Gellar (because of her Buffy days) and Meryl Streep (because duh). And third, of course, is Winona Ryder, who turns 43-years-old today. Isn't that crazy? It seems like only yesterday she was playing the angsty adolescent in all of us.

She's been on a weird path the last decade or so, culminating in a shoplifting scandal and now enjoying a sort-of comeback, but when Ryder debuted on the scene in the late eighties, she embodied a true teen misfit in the guise of a doe-eyed ingenue (or was it the other way around?) Everyone, Johnny Depp included, was captivated by her fresh persona. Her characters have followed suit, encompassing serial killers, vampire-lovers, Gen-Xers and Jesus freaks. All weirdos in their own right, but one's we've come to know, love, and oddly enough, relate to.

One woman, eight characters, all varying degrees of strange. Who trumps the list as the most down-to-earth character? Who ends up being the most off-the-wall? The ranking may surprise you. Mild spoilers alert for the unenlightened, but the majority of these movies are about two decades old. Without further ado, let's revisit and rate these iconic Ryder roles — from mildly misunderstood to batshit crazy. Wino forever!

You'd think everyone's favorite goth kid would rank lower on this list, but despite her affinity for black and the straight-faced ability to say things like, "my life is a dark room," Lydia is shockingly level-headed. Further, when you take a gander Lydia in the animated series, she's actually tremendously sensible for someone surrounded by constant paranormal activity.

For a movie that's so distinctly 90s (I have the soundtrack as proof), Reality Bites actually ages really well, and that's in part to Ryder's performance as Leilana Pierce. Leilana is a recent college grad who's in between shitty jobs and possesses high creative ambitions. The most problematic things in her life are the struggle to pay the bills (she manages to surreptitiously charge things on her dad's credit card for cash) and getting stuck in a love triangle with a business man and a deadbeat philosopher. Obviously she chooses the latter.

Verdict: A Little Lost, but since Leilana is basically ALL of us at 23, who are we to judge?

Babe Bennett is a journalist who goes undercover as Pam Dawson, virginal school nurse, to extract scandalous leads on new billionaire-to-be Deeds. It's not really a great thing to do, but it's not personal, it's a job. We all do crazy things for a story. It's the entire premise of our Lifestyle vertical.

Charlotte is the eldest daughter in what is probably the awesomest family ever (her mom is Cher and her little sister is Christina Ricci), and, disapproving in her mother's hedonistic lifestyle, she gets really obsessed with Christianity. As she's reminded throughout the film, she's Jewish, but so it goes. Charlotte is more-or-less filled with good intentions, and her only slip-ups are due to typical teenage carelessness. OK, yeah, her sister almost drowns while she's busy losing her virginity. It happens to all of us.

Mina as a character remains relatively prim and restrained, her few moments of darkness coming from her almost-affair with dear old Vlad. I guess that in itself is pretty bad, yet somehow I find it easier to justify being seduced by the prince of evil versus your high school boyfriend, Crazypants McTrenchcoat (hold on, we'll get there).

Verdict: Just a Little Batty, and to be fair, it's mostly under the allure of what is obviously the sexiest Dracula.

Technically, Susanna Kaysen is a real person, so I'm more-so speaking on behalf of the character presented on film. Also important to mention: this is the only character on our list that's actually been in an insane asylum. But the entire point of Girl, Interrupted is to question what really defines "sanity." Susanna, despite her troubles, her diagnosis, and even her suicide attempt, is an intelligent young woman who's just trying to figure things out in the same way Leilana is. We're seeing a particularly dark episode in her life, certainly, but I would give her the benefit of the doubt.

Verdict: Slightly more lost, but definitely has the potential to find herself.

Veronica is savvy for knowing how high school politics work, and she gets props for undermining the system in the first quarter of the movie. However, points have to be subtracted for the fact that she (accidentally or not) ends up killing her best friend classmates, even if it was supposed to just be some harmless pranks with her boyfriend, Crazypants McTrenchcoat. Ultimately she does the right thing by (SPOILER ALERT FOR A 25-YEAR-OLD MOVIE) stopping J.D. from blowing up the school, but it should've never gotten to that point.

The first time I watched Black Swan I looked at Natalie Portman's character and thought, "Gee, that's a role Winona Ryder would've played 15 years ago." And then, out of nowhere, you see Ryder cast as the past-her-prime prima ballerina Beth MacIntyre, who ultimately loses her star status to Portman. Brilliant.

However, Beth is legitimately next level crazy, even a film where the protagonist is hallucinating half the time. We can't be certain if she actually cuts up her face or if that's another delusion, but her vile confrontation with Nina and spiteful suicide attempt is definitely enough proof that she is not someone you want to deal with.