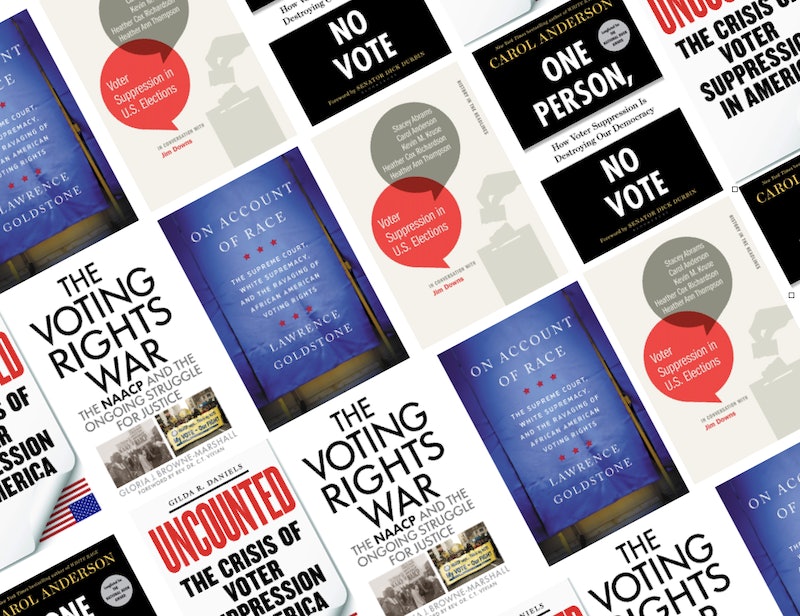 Redistricting. Gerrymandering. Poll tax. Voter ID laws. You might have heard of them, but do you really know what they are, and how they impact U.S. elections? These five books about voter suppression in the United States will inspire you to get involved in the fight for fair elections.

There's a lot of talk about so-called voter fraud going on today, but the truth is that what we call voter fraud isn't actually a thing, from a statistical perspective. However, the systematic disenfranchisement of elderly and disabled voters, and voters of color, is a very real problem, and it's one that everyone, in every state, should be committed to eliminating. If the lack of translators and abruptly closed or relocated polling locations can affect someone else in the United States, they can affect you, too.

No matter if you carry your voter registration card with you everywhere or you've never voted in your life, this is a conversation in which you should be taking part. To help you get started, Bustle has put together a short list of five books about voter suppression, any one of which will empower you understand and combat one of the United States' largest equity issues.

1. The Voting Rights War: The NAACP and the Ongoing Struggle for Justice by Gloria J. Browne-Marshall

'The Voting Rights War: The NAACP and the Ongoing Struggle for Justice' by Gloria J. Browne-Marshall
Amazon

Race, Law, and American Society author Gloria J. Browne-Marshall traces the history of African American voting rights in this slim volume. Moving from antebellum America through Plessy v. Ferguson and into the present, Browne-Marshall's The Voting Rights War is a must-read book for anyone who wants to know how we got to now.

2. One Person, No Vote: How Voter Suppression Is Destroying Our Democracy by Carol Anderson

'One Person, No Vote: How Voter Suppression Is Destroying Our Democracy' by Carol Anderson
Amazon

Published in the wake of Shelby County v. Holder, a Supreme Court decision that allowed U.S. counties to change voting policies without federal approval, and longlisted for the National Book Award, White Rage author Carol Anderson's One Person, No Vote examines the impact of voter suppression on the United States.

3. Uncounted: The Crisis of Voter Suppression in America by Gilda R. Daniels

'Uncounted: The Crisis of Voter Suppression in America' by Gilda R. Daniels
Amazon

From the former deputy chief of the Civil Rights Division at the Department of Justice comes this eye-opening account of voter suppression since 1965, when Lyndon B. Johnson signed the Voting Rights Act into law. In spite of that legislation, which eliminated literacy tests and enfranchised immigrants and members of ethnic minority groups, attempts at voter suppression have not ceased, as Uncounted makes clear.

4. On Account of Race: The Supreme Court, White Supremacy, and the Ravaging of African American Voting Rights by Lawrence Goldstone

'On Account of Race: The Supreme Court, White Supremacy, and the Ravaging of African American Voting Rights' by Lawrence Goldstone
Amazon

Beginning with the United States v. Cruikshank decision of 1876, which removed 14th Amendment regulation for state governments and private businesses and citizens, Lawrence Goldstone's On Account of Race reveals the ways in which the U.S. Supreme Court has, time and again, upheld white supremacy at the expense of voters of color.

Begun as a conversation between the editor, Stacey Abrams, Carol Anderson, Kevin M. Kruse, Heather Cox Richardson, and Heather Ann Thompson, Voter Suppression in U.S. Elections is a must-read new book about the modern-day fight against disenfranchisement and how everyone can — and should — get involved.

More like this
5 Gripping Books To Read From Women’s Prize For Fiction Winner Ruth Ozeki
By El Hunt
Lauren Rae Is Bringing Back The Sex And The City Vibes In Her New Memoir
By Shahed Ezaydi
Annie Lord’s Memoir Will Make You Believe In Love Again
By Shahed Ezaydi
16 Novels That Paint A Realistic Portrait Of Abortion
By K.W. Colyard
Get Even More From Bustle — Sign Up For The Newsletter