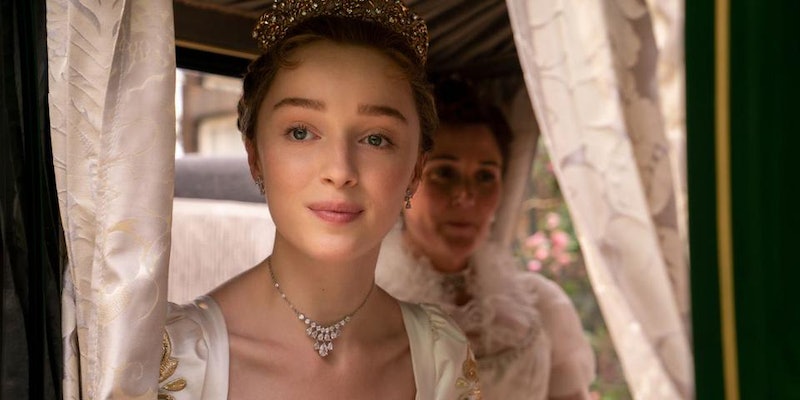 It’d be an understatement to say that the Shondaland-produced Netflix series Bridgerton has become a cultural — and sexual — phenomenon. Julia Quinn’s books that inspired the series are selling for over $700 online, there’s Lady Whistledown-inspired merch on sale, and there’s already a campaign to make lead Regé-Jean Page the new James Bond. So it's no surprise that the show has gained a loyal audience on TikTok, too.

Earlier this week, musician Abigail Barlow posed a relatively simple concept to her followers: What if Bridgerton was a musical? Barlow quickly recorded several snippets of tracks from the perspectives of different characters — and racked up millions of views and collaborations in less than two days.

It looks like the streaming giant thinks Barlow’s onto something too, because Netflix tweeted out a video of her and singer Nick Daly performing one of her compositions.

Barlow’s original songs are already brilliant, but they were each made even better by duets and reenactments from users all over TikTok. (Some of them even started casting parts for the fictional musical.) Scroll through to see the finished products.

Barlow’s initial composition starred Daphne Bridgerton at the ball where she meets her begrudging-family-friend-turned-fake-partner-turned-real-husband Simon Basset. Users immediately began adding sections for Simon and other characters to the original song, so Barlow eventually recorded a separate track with lyrics for Simon’s parts.

Barlow then did her take on one of the best lines of the entire series, when Simon confesses to Daphne on their wedding night that he “burns for her.” (Whew!) However, the lovebirds’ honeymoon quickly turns sour when Daphne realizes that Simon didn’t tell her the full truth about his background before they married, and she retaliates.

Barlow then went on to create a flawless tune sung by perpetual wallflower Penelope Featherington. She also added a separate instrumental for even more chances to duet the song.

More like this
Nicola Coughlan Shared A Lady Whistledown Excerpt From ‘Bridgerton’ Season 3
By Grace Wehniainen, Alyssa Lapid and Sam Ramsden
'Heartstopper' S2 Just Welcomed Four Brand New Cast Members
By Nola Ojomu and Sam Ramsden
The First Clip From Netflix’s Queen Charlotte ‘Bridgerton’ Prequel
By Bustle Editors
These 'Bridgerton' Continuity Errors Are Almost As Infuriating As The 'GoT' Coffee Cup
By Jake Viswanath and Meguire Hennes
Get Even More From Bustle — Sign Up For The Newsletter