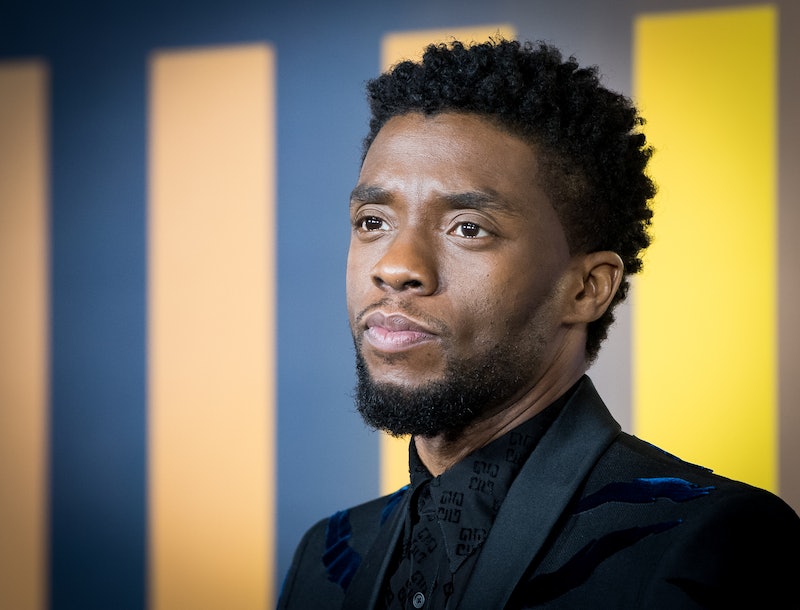 Following the death of the Black Panther star, ABC is airing a Chadwick Boseman special on Sunday, Aug. 30. The tribute will air after the ABC debut of Marvel's Black Panther, which will also be commercial-free. The network has set out to honor Boseman's life, legacy, and career on and off screen in the special titled, Chadwick Boseman — A Tribute for a King.

Viewers can also expect to see tributes from celebrities, political figures, fans, Boseman's co-stars, and those closest to him. The 40-minute special will air after the network's debut of Black Panther, which is scheduled for 8 p.m. to 10:20 p.m. EST. In an official press release obtained by Bustle, ABC also notes that the tribute will "shine a light on the medical condition he privately battled."

On Friday, Aug. 28, Boseman's family announced he had died at the age of 43 following a four-year private battle with colon cancer. "It is with immeasurable grief that we confirm the passing of Chadwick Boseman," the statement shared on his Twitter said. "Chadwick was diagnosed with stage III colon cancer in 2016, and battled with it these last 4 years as it progressed to stage IV." His family also shared that the actor "died in his home, with his wife and family by his side."

The talented actor's death came as a shock to many leading people honoring the critically-acclaimed star across social media. Many celebrities, including his fellow Marvel co-stars, remembered Boseman with emotional messages.

Chris Evans, who starred alongside Boseman in several Marvel movies, wrote on Twitter, "Chadwick was special. A true original. He was a deeply committed and constantly curious artist. He had so much amazing work still left to create. I’m endlessly grateful for our friendship." Guardians of the Galaxy star Zoe Saldana shared on Instagram, "I will tell my sons about you forever. You were one of the classiest men I have ever met in my life." These are just two of the many tributes posted in honor of Boseman.

Boseman has left quite the legacy behind and not only in Black Panther. His work in Marshall, 42, Da 5 Bloods, and so much more, will forever be remembered by many.

More like this
Paul Mescal, Man Of Mystery
By Samantha Leach and Heather Hazzan
Here’s Everything Coming To & Leaving Netflix In October
By Jake Viswanath
Helen Mirren Reacts To Queen Elizabeth II’s Death After Playing Her 15 Years Ago
By Grace Wehniainen and Radhika Menon
What’s New On Netflix: Ana De Armas’ 'Blonde' & A Nick Kroll Special
By Arya Roshanian
Get Even More From Bustle — Sign Up For The Newsletter