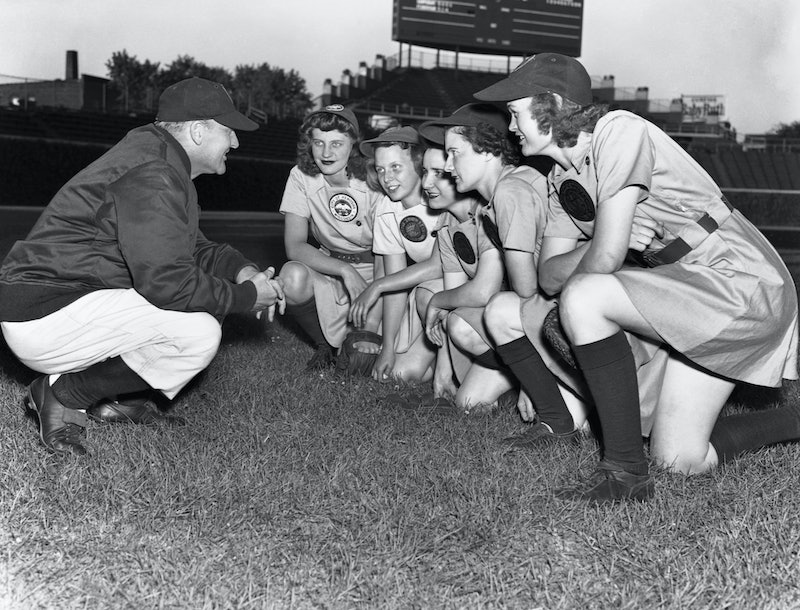 Ever since its release in 1992, the women’s baseball film A League of Their Own established itself as an instant classic, beloved by sporty girls, baseball fans, and everyone in-between. Now, Amazon is releasing a television version of A League of Their Own, starring D’Arcy Carden and Abbi Jacobsen as players for the Rockford Peaches — a team in the 1940s-era All-American Girls Professional Baseball League (AAGPBL) — and Nick Offerman as their curmudgeonly manager.

It’s possible that many viewers don’t realize that the story it depicts — of young women across America being recruited to play professional ball during WWII, when most athletic young men were serving in the military — is based on facts. The film (and series) was inspired by a documentary of the same title, made by Kim Wilson and Kelly Canaele, whose mother Helen was a player in the AAGPBL.

But there’s more to the history of the AAGPBL than A League of Their Own. In the 1940s, women’s baseball flourished in America: AAGPBL games drew packed crowds and newspapers reported on box scores, injuries, and accomplishments of AAGPBL teams and players — just as they reported on Major League Baseball. Sadly, interest in the league diminished in the 1950s. But surviving members of the league and baseball historians are intent on preserving their history — which you can read more about below.

What was the All-American Girls Professional Baseball League?

The AAGPBL was originally born out of necessity. Though the MLB continued being played during WWII, its player pool was depleted as a result of the draft, and as the official history of the AAGPL notes, many minor league teams shut down because they didn’t have enough players. Major league team owners worried about what might happen if they lost even more players, and Philip K. Wrigley, the Chicago Cubs’ owner, and other members of his organization decided to recruit women to fill the gap and maintain public interest in the sport. Though Wrigley had at first hoped to use MLB parks for AAGPBL games, other teams refused to participate in the scheme, and the new league set up camp in cities without an MLB team. The league began with four teams, based in Racine, Kenosha, Rockford, and South Bend, and by the league’s most successful year, in 1948, it had 10. That year, a whopping 910,000 people attended AAGPBL games. Originally, the women played softball; in 1950, pitchers began throwing overhand, and other changes were made to the game to make it more closely resemble baseball, including instituting smaller bases. The Rockford Peaches was the league’s most successful team, winning championships in 1945, 1948, 1949, and 1950.

From the league’s inception, Wrigley and the other organizers made sure that their players were attractive and that they looked good while playing. According to the league’s official history, players had to attend charm school classes and abide by a certain dress code. They were provided with beauty kits and flattering uniforms. Even for women who didn’t find this element appealing, though, the AAGPBL had plenty to offer. And despite this enforcement of gender norms, Sports Illustrated reports, former AAGPBL player Maybelle Blair, now 95, told the showrunners of the new Amazon show that there was a thriving queer scene amongst the players: “It was a party,” she said. And perhaps most importantly for the players, they were paid well for their efforts, with salaries ranging from $45 to $85 per week when the median weekly income for a woman working full-time was around $30.

Sometimes, newspaper coverage of the AAGPBL players emphasized the players’ looks and femininity. A 1945 article in The Dayton Herald about pitcher Joanne Winter, written by a female journalist, begins, “You’re 5 feet, 7 1/2 inches tall, weigh 138 pounds, think Taboo lipstick is heavenly, look attractive in a short-skirted yellow and brown broadcloth uniform and pitch a fast outcurve. The fellas whistle at you, too, because you’re definitely wolf-bait with your sparkling eyes and short, brown, curly hair.” But more often, newspaper coverage treated the AAGPBL players like athletes. A Racine Journal Times article from 1943 reads, “Olive Little, sturdy right-hander for the Rockford Peaches, has the first no-hit, no-run victory in the history of the All-American Girls Softball league to her credit today.” The sports page of this paper is dominated by stories about the AAGPBL, with MLB updates shunted to one side.

The players themselves also made it clear again and again over time that they were serious athletes. They were ready to get bruised and dirty in the name of their sport. “In the spring, we’re always hoping we’d develop calluses,” AAGPBL star Dorothy Kamenshek (see below) once said. “If you got your skin toughened up, you were pretty lucky most of year.” Blair, meanwhile, told The L.A. Times last year, “The worst thing about it is we didn’t have any sliding pads, so we had strawberries on our rear ends. In fact, you could probably still pick gravel out of my rear end from sliding. We didn’t quit. Nowadays, ballplayers, they break a fingernail and they’re on the DL list for a month.”

Above all, the AAGBPL players loved baseball. Former player Helen “Sis” Waddell Wyatt described her teammate Dottie Ferguson Key, who played for the Peaches for 10 seasons, to the Pittsburgh Post-Gazette as “strictly a baseball player. She loved it.” Key herself once told reporters at a AAGPBL reunion, “I’d rather play ball than eat or sleep.” Lavonne Davis, a teammate of legendary player Faye Dancer, once told the New York Times of Dancer’s throw from center field to home plate, “I never saw any woman or man do it any better.”

What happened to women in baseball?

Today, Major League Baseball in America is an exclusively male sport. But in 1950, one AAGPBL player, Dorothy Kamenshek, got close to breaking the gender barrier and playing for a professional men’s team. Kamenshek, who played first base for the Rockford Peaches, was widely recognized as the best player in the AAGPBL. In 1946, the Racine Journal Times wrote that she was “In a class by herself,” and would play first base at the league’s all-star game. That year, she had a .316 batting average, logged a league-record 129 hits, and stole 109 bases. She was also a stellar defensive player. A more recent San Francisco Chronicle article attests that she “was known to jump three or four feet in the air and do splits to snag the ball.”

In 1950, when Kamenshek was 26 years old, the Brooklyn Daily Eagle reported that the Fort Lauderdale Braves, of the minor league Florida circuit, attempted to buy her from the Peaches. At this time, free agency didn’t yet exist as a concept in sports; owners and managers had total control over their players. Unsurprisingly, the Peaches didn’t want to give up their star player, and Kamenshek may not have been interested in being the only woman in a men’s organization. When the rumors of an acquisition were in the air, The San Francisco Examiner wrote a nasty article dismissing the idea of a woman playing on a team with men: “Picture, if you will,” the paper wrote, “the sight of Miss Kamenshek raising a dainty hand at home plate and calling time out while she applies a little lipstick or powder.”

But Kamenshek also may have been denied an opportunity to prove men like this wrong by playing in the big leagues. She wasn’t given a choice in the matter; instead, the men in charge of the AAGPBL made it for her. Fred Leo, who ran the AAGPBL, explained his decision to retain Kamenshek by saying, “We felt that women should play amongst themselves and that they could not help but appear inferior in athletic competition with men.” No less an expert than former Yankee Wally Pipp, by contrast, had described Kamenshek as the “fanciest fielding first baseman I’ve ever seen, man or woman.”

As the Baseball Hall of Fame writes, women did briefly play in the Negro Leagues in the early 1950s, when interest in all-Black teams was dwindling as MLB integrated. Toni Stone, the first woman to play on a Negro League team, found herself receiving similar criticism to Kamenshek, this time in person: Though she was a gifted athlete, and many fans appreciated her skill, others sneered at her for playing a “male” sport. “Why don’t you go home and fix your husband some biscuits?” one heckler shouted. Two other female players, Connie Morgan and Mamie Johnson, briefly followed Stone into the Negro Leagues.

Soon, however, both the AAGPBL and the Negro Leagues would collapse, and MLB would become the only major baseball league in America. The Negro Leagues wound down in the late 1950s as a result of the racial integration of baseball. But the demise of the AAGPBL is a little more complicated. The league played its last season in 1954, well after the conclusion of WWII. Though the league had been on the decline for a few years, it had thrived in the late 1940s, after WWII was over. In theory, it should have been able to continue indefinitely. But after men returned from WWII, America entered a period of social conservatism, which reinforced traditional gender norms and celebrated women for staying at home. In that environment, there wasn’t as much interest in path-breaking female athletes.

What is the AAGPBL’s legacy?

Before the 1992 film revived interest in the AAGPBL, the story of women in American baseball had largely been forgotten. For surviving player Maybelle Blair, cementing the league’s legacy and expanding its visibility is of paramount importance. Blair has been campaigning to finance and build an International Women’s Baseball Center in Rockford, Illinois, for years. “I hope to God that I can get the shovel going into the ground before I’m on the other side of the grass because I’ve got to live long enough to see this happen,” she told The L.A. Times last year.

Blair is also an emphatic advocate for a women’s baseball league that could exist in parallel to MLB, à la the WNBA. Though baseball historian and president of the International Women’s Baseball Center Kat Williams insists that “Women have always been part of the game … We’ve always played, umpired, coached, tended the fields, kept the stats, [and] owned the teams,” women’s baseball and softball remain marginal sports in America, and women rarely rise in the ranks in baseball organizations. When they do, Blair celebrates. She was particularly thrilled by Kim Ng’s appointment as general manager of the Miami Marlins in 2020. “I felt almost as if it was me that got it,” she told The L.A. Times. “We don’t want any token jobs. If we earn it, yes, and Kim Ng has earned it. We can go in the front offices. We can write. We can broadcast. We can be umpires.”

Women’s baseball has a long way to go, but the AAGPBL had an incalculable impact on women’s sports — and on the women and girls who watched them in their heyday. For a recent Sports Illustrated feature, Norma Smith, now 84, tells the magazine, “Baseball was our life. [The Peaches] were my heroes.”

“At the time we were just kids having fun,” former player Dottie Collins told the Baseball Hall of Fame. “Not until it was all over did we realize that we had been pioneers as far as women’s sports are concerned.”

More like this
'The Rings Of Power' Episode 5 May See The Realms Brought Together
By Kadin Burnett
Nazanin Boniadi Was A Healer Long Before 'The Rings Of Power'
By Olivia-Anne Cleary
The 'Reasonable Doubt' Cast Includes A 'Save The Last Dance' Reunion
By Grace Wehniainen
Here's What Jeffrey Dahmer's Dad Has Said About His Other Son, David
By Grace Wehniainen
Get Even More From Bustle — Sign Up For The Newsletter