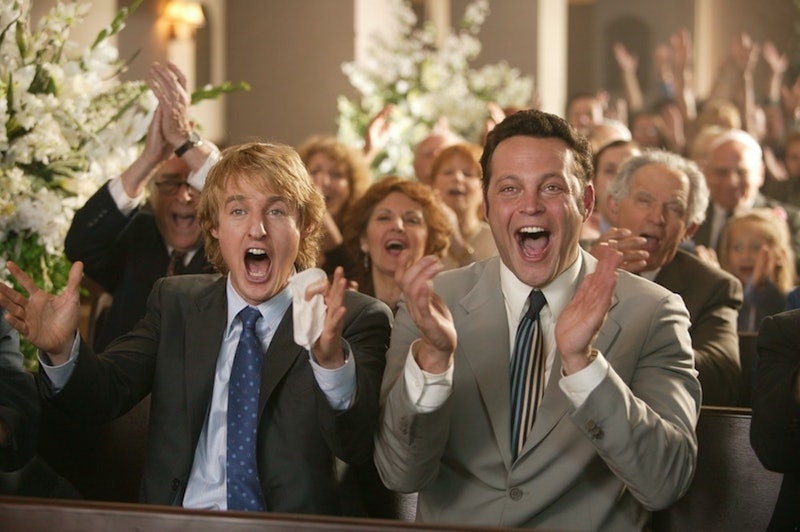 It's been 15 years since Owen Wilson and Vince Vaughn first teamed up to crash some weddings in the 2005 blockbuster hit Wedding Crashers. Full of fun, quirky characters and some truly hilarious dialogue, the film became an instant success. However, it seems the story of John Beckwith and Jeremy Grey may not be entirely over with just yet. During a recent interview, director David Dobkin, whose newest film, Eurovision, is Netflix's newest comedic hit, revealed that a Wedding Crashers sequel is potentially in the works and would explore a crucial time period in the characters' lives.

"We talked about it for many, many years," Dobkin told Entertainment Weekly. "Vince, Owen, and I sat down at one point early on, when they were pressuring us to come up with something, and we had a lot of fun, but we realized we were remaking the same movie again and we really didn’t want to do that." But now, more than a decade and a half later, Dobkin believes he's now come up with a solid premise for where the story could continue on.

"Ten or more years later, all of a sudden these guys are in their mid to late 40s and they end up single — what do they do?" Dobkin explained, noting that he's known a lot of guys in real life who ended up in a similar type of situation either due to a marriage ending or never fully coming to fruition. "It’s a head trip for men, the idea of maybe I’m not going to be a dad, maybe I’m not going to be married. So it became a real cultural question and it yielded an interesting kind of center to the movie."

But as interesting as Dobkin may find the idea, it's impossible not to ignore the underlying flaw in the movie's overall premise: the sequel would ultimately exclude all of the female characters from the first film. If John and Jeremy end up back on their own, that would basically rule out the need for Rachel McAdams or Isla Fisher's characters to return — at least in a significant capacity. Both women served as fundamental roles in the original movie on a comedic and emotional level. They helped to make Wilson and Vaughn's characters more likable, so removing them from the main narrative feels like a mistake.

Dobkin didn't go into details as to when exactly this sequel could be made or who would be involved, only to say that "we are having conversations" about making it a reality. Though, for him, he really doesn't see the point in rushing it even all these years later.

"I believe in sequels that are new and appropriate, and I don’t think there’s a time limit of chasing what that is. There may be one day when we can finally get it all together," he added. "I can tell you that it’s really fun to read those voices of these guys on the page again. There was a joy that I was surprised at when I read the first draft of what could have been, or maybe one day will be, this sequel. I do think audiences would love it." Let's hope that he's right.