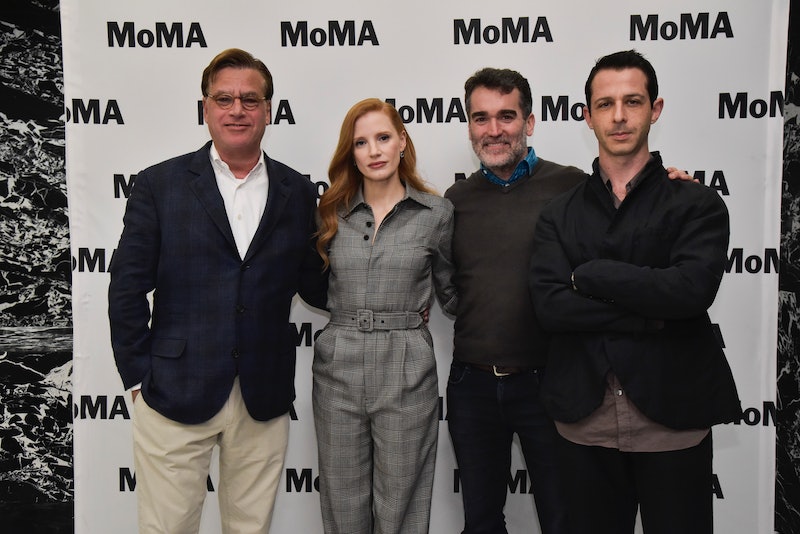 Of the roughly 7,000 words in writer Michael Schulman’s Dec. 5 New Yorker profile of Jeremy Strong, less than 60 of them belonged to Aaron Sorkin. In the piece, the Academy Award-winning writer-director — who worked with the Succession star on Molly’s Game and The Trial of the Chicago 7 — shared two brief anecdotes that seemed to illustrate Strong’s perceived unorthodox acting methods, including his request to use real tear gas for a scene, as well as how he apparently played a kazoo while a co-star was filming.

Following the article’s publication, Sorkin insisted in an open letter that his comments about Strong had been misrepresented. It was less his defense of the actor, and more so the method he used to share his message, however, that caused him to trend on Twitter. Because Sorkin apparently avoids social media altogether, he enlisted Molly’s Game star Jessica Chastain’s help to clarify his statements in the New Yorker piece, which was titled “On Succession, Jeremy Strong Doesn’t Get the Joke.” Attaching Sorkin’s letter to a Dec. 10 tweet, Chastain wrote, “Aaron Sorkin doesn’t have social media so asked me to post this letter on his behalf xx.”

It didn’t take long for Twitter users to birth a new meme, joking about things that Sorkin might have asked them to share as well. Among them were an imagined cat biopic, McDonald’s nutrition facts, and even a throwback middle school calculator trick.

Despite the social media fun, Sorkin’s defense of Strong’s character was much more serious. “After reading Michael Schulman’s profile of Jeremy Strong — a profile in which I participated — I wanted to speak up,” he wrote in the letter that Chastain shared on his behalf. “I think I helped Mr. Schulman create what I believe is a distorted picture of Jeremy that asks us to roll our eyes at his acting process.”

In the New Yorker piece, Sorkin had reflected on Strong’s unique acting approach. While shooting The Trial of the Chicago 7, for example, the Emmy winner had apparently requested to be sprayed with real tear gas. “I don’t like saying no to Jeremy,” Sorkin told Schulman. “But there were two hundred people in that scene and another seventy on the crew, so I declined to spray them with poison gas.”

His second published comment dealt with Strong’s on-set interactions with co-star Frank Langella, including how Strong would read aloud from his fellow actor’s memoir in silly voices between takes and even placed a remote-controlled fart machine below his judge’s chair. Quipped Sorkin, “Every once in a while, I’d say, ‘Great. Let’s do it again, and this time, Jeremy, maybe don’t play the kazoo in the middle of Frank Langella’s monologue.’”

Conceding that it’s “perfectly normal” for a journalist to only use a small portion of an interview, Sorkin took issue with the “only one and a half” answers used being about the tear gas and playing the kazoo. “Let me be clear, Jeremy would never suggest endangering a member of the cast of crew or anyone else,” he said, also sharing the five questions Schulman had asked him, along with his full answers. “It was something he mentioned in passing and I was telling the story affectionately and as a way of demonstrating his commitment. Nor would Jeremy consider disrespecting an actor and certainly not Frank Langella.”

In a Dec. 10 statement to Deadline, a New Yorker spokesperson responded to Sorkin’s criticism, countering, “This is a nuanced, multi-sided portrait of an extremely dedicated actor. It has inspired a range of reactions from people, including many who say that they are even more impressed by Jeremy Strong’s artistry after having read the article.”

Prior to assisting Sorkin in getting his message out, Chastain, for her part, defended Strong on Dec. 7 with a tweet of her own: “I’ve known Jeremy Strong for 20yrs & worked with him on 2 films. Hes a lovely person. Very inspiring & passionate about his work. The profile that came out on him was incredibly one sided. Don’t believe everything you read folks. Snark sells but maybe its time we move beyond it.”