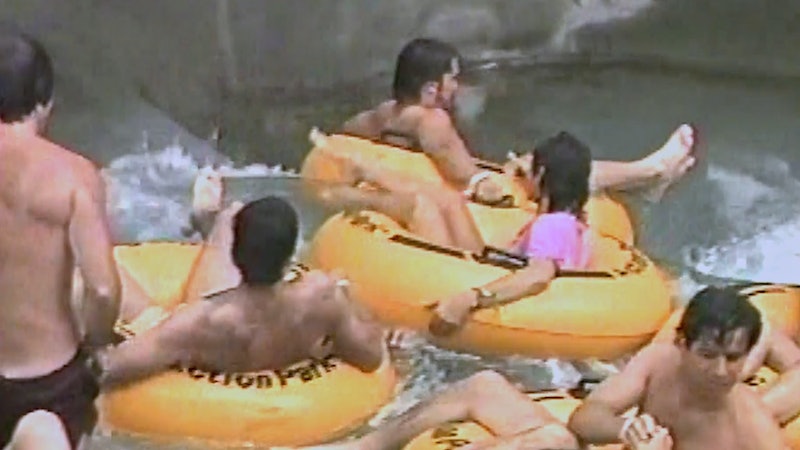 Ask any New Jersey native about Action Park and they're likely to have a story for you. (If not a scar to show you.) And it's these stories and battle wounds that are at the heart of HBO's new documentary, Class Action Park, which charts the New Jersey based theme park's opening, years of success, and eventual decline. But thrill-seeking viewers might be wondering, is Action Park still open?

The iteration of the legendary park shown in the documentary was open from 1978 to 1997. In that time the park became notorious for its dangerous rides like the Alpine Slide — which was made out of asbestos, fiberglass and concrete — as well as for employing local teenagers who treated the park like a summer camp.

Still, crowds flocked to Action Park to partake in their rides which placed guests "at the center of the action," according to its slogan. Over time, the park earned the nickname "Class Action Park," and its rides were also given similar nicknames by the guests, such as the "Wave Pool" being dubbed the "Grave Pool." But the park's nicknames weren't all fun and games. According to the New York Times, six people died at the park between 1978 and 1996.

The park finally closed in 1997 after Mulvihill's company Great American Recreation declared bankruptcy. (Following a slew of law suits.) But by 1998, Intrawest (a Canadian resort company) purchased the property and renamed it Mountain Creek Waterpark. Then in 2010, another company bought the area: Crystal Golf Resort, which, as it turns out, was owned by Mulvihill.

Action Park never reopened before Mulvihill's death in 2012. However, in 2014, Mulvihill's son, Andy Mulvihill, revived it, changing its name back to Action Park — only this time, with "all of the thrills and none of the spills," according to the park's executives at the time of the reopening. This iteration of Action Park only lasted for two years, as in 2016, it was renamed Mountain Creek Waterpark.

Currently, Mountain Creek Waterpark is open and operating with a limited guest capacity after an extended closure due to the coronavirus pandemic. But between COVID-19 and its infamous legacy, are you really up for it?

More like this
The 'Gossip Girl' Reboot Creator Is “Looking For A New Home” To Air A Potential Season 3
By Brad Witter
Who Is "Daddy" Pedro Pascal Dating? People Are Thirsting Over The 'Last Of Us' Star
By Alyssa Lapid
Bill & Frank’s 'The Last Of Us' Episode Has Twitter Emotionally Wrecked
By Alyssa Lapid
Here’s What Happens To Bill & Frank In 'The Last Of Us' Video Game
By Brad Witter
Get Even More From Bustle — Sign Up For The Newsletter
From hair trends to relationship advice, our daily newsletter has everything you need to sound like a person who’s on TikTok, even if you aren’t.