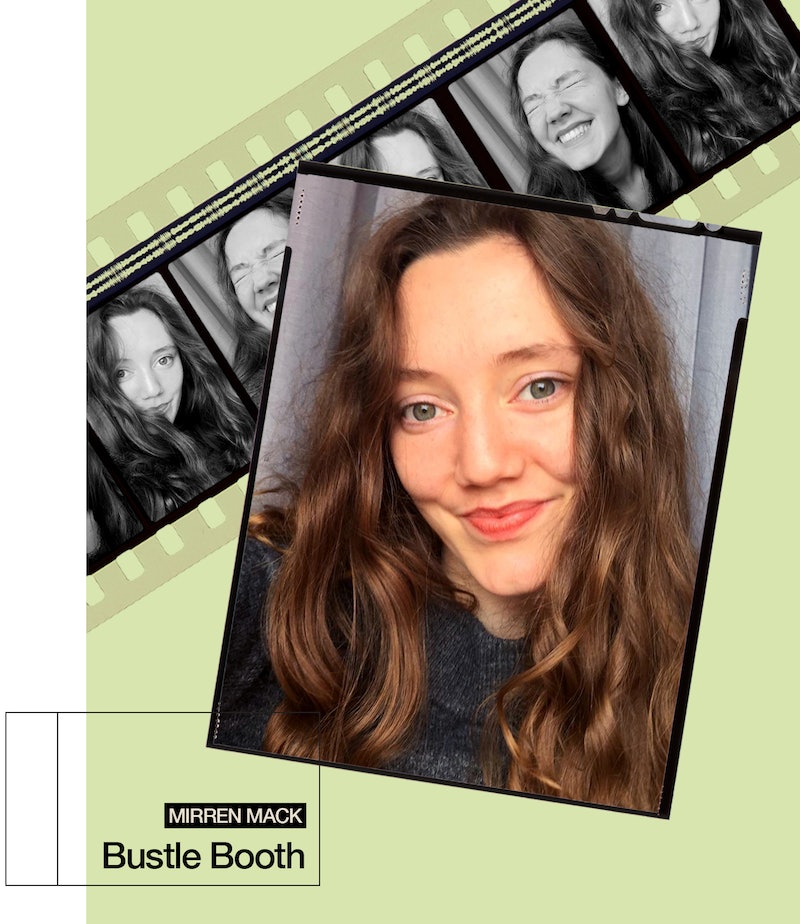 Mirren Mack became an actor so she could “do everything.” The 23-year-old Scot explains: “I was frustrated that I’ve only got one life, with only one path. I couldn’t be a firefighter and surgeon and lampshade designer, I had to choose one thing.” As an actor, though, she’s been a school student who discovers her asexuality in Sex Education and a surrogate mother in BBC One’s The Nest. And there are even more adventures in store.

After embodying a teen mum in The Nest, Mack’s latest role (in the BBC Three comedy short LadyBaby) sees her play the daughter of one. Written by Kirstie Swain, LadyBaby follows the story of 36-year-old Suzie (played by Amy Manson) and Kate (Mack) the baby she unwillingly gave up for adoption as a teen, who is now 21. As their two worlds — and dramatically disparate personalities — collide in a span of 25 minutes, LadyBaby packs a punch with moments both lighthearted and poignant. In Mack’s words, it’s a “rom-com between a mother and daughter”.

Before she was cast, Mack thought she had lost the role. “I auditioned for it and then everything got postponed because of lockdown. I thought it was gone forever, that I wasn’t going to be a part of it,” she tells me over the phone. A year and half later, her agent called, saying that the people behind LadyBaby wanted to meet. “I was like, ‘What? After all this time?’ I was so glad because, when I read [the script], it blew my mind.”

Despite a short filming period of about two weeks, the cast built up a great rapport. “We all just clicked into place,” Mack recalls. Her main hope for the show is that viewers will see beneath its comedic set-up. She explains that, behind the laughs, it’s “a very human struggle of two women who are looking for a connection with each other, but who have to battle their own defence mechanisms as they teach each other to be better versions of themselves.”

When she’s not acting, Mack likes to have her chill time. She’s a huge fan of walking, (“but sometimes I miss lots of beautiful things because I’d spent all my time looking at my phone!”) and crafting with clay. As a result, she says lockdown was a time to “be like a cat in the sun, to let myself just be.”

But for now chill time is over, as Mack is focused on her next gig. She’s calling me from Reading, where she’s preparing for her upcoming role in the prequel for Netflix’s hugely popular video-game-inspired fantasy series The Witcher. Mostly, she’s excited to be in a completely “alien world with different rules and magic” — all part of her desire to try everything and embody as many different kinds of people as she can. She says, “You know, I recently met someone who’s built his life in a van and is travelling the world. I don’t know what my version of living is, I just want to do everything — and acting is definitely the way I’m doing that at the moment.”

Get to know Mack with her Bustle Booth questionnaire below.

I’m not that big on coffee, so just a cup of tea would do me.

Scooby-Doo. The live action films were immense too.

Don’t know if it counts because she’s fictional, but in this moment it’s Shirley Carter from Eastenders. Love this woman.

Strictly Come Dancing. Would also want to say SAS Who Dares Wins but I genuinely think I could meet my death on that show.

The other day there was a band playing at the train station, and everyone watching seemed to have their phones out filming. But then there was one man who was just completely lost in the music and was dancing so gracefully while no one really took any notice, and I just though YES. He wasn’t doing anything for anyone but himself and how it made him feel and it was just quite beautiful. I admired that self contentment or confidence or whatever the word is. He seemed like someone who relished the good things when they came and didn’t miss moments.

Ladybaby is available on BBC Three and BBC iPlayer from Tuesday 24 August and airs on BBC Scotland on Friday, Aug. 27 at 10.30 p.m.