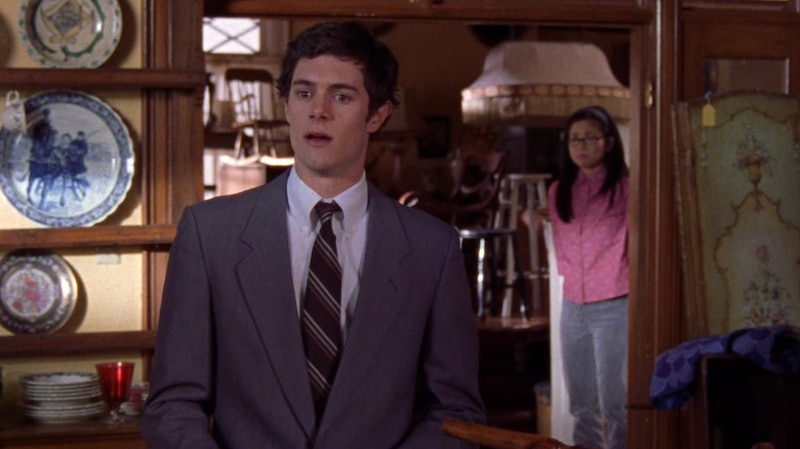 Forget Dean, Jess, and Logan — true Gilmore Girls fans know that Dave Rygalski was the best boyfriend on the show. And even almost two decades later, actors Adam Brody and Keiko Agena are sad Dave and Lane didn't end up together on Gilmore Girls. The pair reunited for an Instagram Live on Thursday, Sept. 24, in collaboration with Vote Forward, where they encouraged fans and followers to write letters to citizens urging them to vote in the 2020 presidential election.

In addition to talking about the importance of voting in the upcoming election, Agena and Brody reminisced about their time together in Stars Hollow. "The real life Dave Rygalski is married to Helen Pai, who is the character that [Lane] was based of off," Agena said after a fan asked what would have happened to the couple had Brody not left to star on The O.C. "Maybe in another universe they ended up together. That's how I would phrase that."

Later, Brody apologized for the fact that his role as Seth Cohen doomed Lane and Dave's romance. "I've seen just on my end some people wanted our characters to end up together and they did not," he said, saying it was a "shame" that he let the fans down. "Well, in another universe," Agena jokingly responded, no doubt inspiring a brand new wave of Gilmore Girls fan fiction.

In addition to talking about their brief onscreen romance, Brody and Agena also answered that age-old question that has plagued Gilmore Girls fans for years: are they Team Dean, Team Jess, or Team Logan when it comes to Rory Gilmore's love life? "That should be your question because you definitely know that quadrangle better than me," Brody — who only appeared on Season 3, when Rory was dating Jess — said. While Agena admitted that she was "already Team Jess," Brody eventually pledged allegiance to Logan Huntzberger (Czuchry) for a very specific reason. "I have a brother-in-law named Logan, so Logan," he eventually said, referring to his wife, Leighton Meester's, older brother.

Still, despite only appearing on one season of the hit show, Brody has fond memories of filming in the fictional town of Stars Hollow, Connecticut. "There was something I really liked about [the fact that] it was exclusively filmed on the Warner Bros. back lot," he recounted, adding that it reminded him of watching old "movies about making movies" as little kid. "There was something so cozy and old fashioned about it. ... There was something thrilling to me and again, like, cozy and kid-like about being in this 'suburb' on a lot in the middle of the night."

The pair also tackled some of the real-life issues facing Americans in the upcoming election, with Brody revealing that he began doing community outreach in the wake of the 2016 election. "I've been a little bit involved with Swing Left," he revealed. "I went knocking on doors in Orange County, [California], because everything I do needs to be TV related." Shockingly, only one person recognized him as Seth Cohen, "and she couldn't even sign [a petition] because she was a teacher" and couldn't be partisan, Brody recalled.

Ahead of the 2020 election, both Brody and Agena encouraged people to get involved with Vote Forward, and write letters to citizens in swing states or battleground states, explaining the importance of voting and encouraging them to take action. "It's incredibly cathartic [to get involved]," Brody said during their conversation. "Whatever the outcome is, or whatever the ultimate benefit is ... I feel like I can breathe easier after when I participate in things like this."

More like this
Netflix Shut Down 'Bridgerton' S3 Rumours About A “Very Dark” Storyline
By Bustle
'The Queen’s Gambit' Season 2 Tweet Wasn’t From Anya Taylor-Joy
By Mary Kate McGrath, Jack Irvin and Grace Wehniainen
'Friends' Star Maggie Wheeler Offers Support To Matthew Perry After Reading His Memoir
By Alyssa Lapid
Jennifer Lopez & Ben Affleck’s Officiant Spilled The Tea On Their Wedding
By Sophie McEvoy
Get Even More From Bustle — Sign Up For The Newsletter
From hair trends to relationship advice, our daily newsletter has everything you need to sound like a person who’s on TikTok, even if you aren’t.