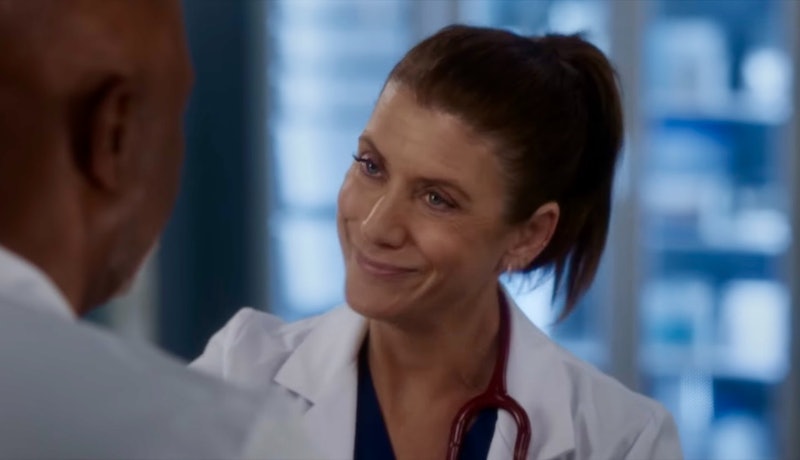 Spoilers ahead for Grey’s Anatomy Season 18, Episode 16. Addison Montgomery is the queen of making an entrance, and she saved the best for her last Grey’s Anatomy Season 18 episode. “Well, well, how far the mighty have fallen,” she bluntly observed while breezing into Grey Sloan for her uterine transplant patient Tovah’s follow-up surgery. “What the hell did you all do to this place? Probation? Really?” Yes, the hospital’s surgical residency program has been suspended amid a crippling doctor shortage, no less, but Addison won’t be back to save the day — this season, anyway.

“Going home to Grey Sloan Memorial is a feeling like none other and I simply cannot wait to do it one more time with all you lovers,” Walsh tweeted hours before the May 5 episode premiered, also attaching a selfie with co-star Caterina Scorsone, aka Amelia Shepherd. Earlier in the day, she also joked about creating an Ellen Pompeo Instagram stan account, writing that “words cannot describe [her] love” for her former co-star. In a perhaps less popular sentiment: she also petitioned for another Grey’s musical episode during an ABC social media takeover.

Whether or not that was a subtle hint about her plans to guest star again in the future, the episode certainly didn’t feel like a farewell. Addison’s presence as the no-nonsense voice of reason is certainly needed in Seattle, too. When Schmitt hesitated to page both Meredith and Richard to scrub in for Tovah’s surgery (in light of their ongoing tension over her Minnesota job offer), for example, she swiftly reminded him, “I’m not a high school teacher; I don’t care who’s talking to who and who isn’t.”

Once in the same room with her former colleagues, Addison also had no issue calling out their juvenile behavior either. “Look, I don’t care what giant dumpster fire this hospital is, I refuse to let Tovah burn with it,” she told Meredith and Richard. “We’re all adults here, let’s act like it.”

Another reason for Addison to return again in the future: Tovah’s pregnancy journey can’t end on such a heartbreaking note. Though she lost her final chance at having a biological child with her late husband during the episode, Addison promised her that she’d keep trying to help her carry a baby to term. As Grey Sloan struggles to save its residency program, however, Addison perhaps-cryptically advised Richard to “stop with the reminiscing about the past and look to the future.”

When they parted ways in her final scene, she didn’t say goodbye to him — or anybody else, for that matter — giving off a vibe that the door is very much open for her to come back, either way.

Walsh, for her part, told media outlets, including Bustle, during an October press call that anything is possible — maybe even a more regular Grey’s role. “Right now, we’re just doing a few episodes,” she said. “Nobody knows what the future holds. I think the last year or so has been evidence of that. But for now, this is what we’ve got planned, to have Addison pop in, and we’ll see what happens.”