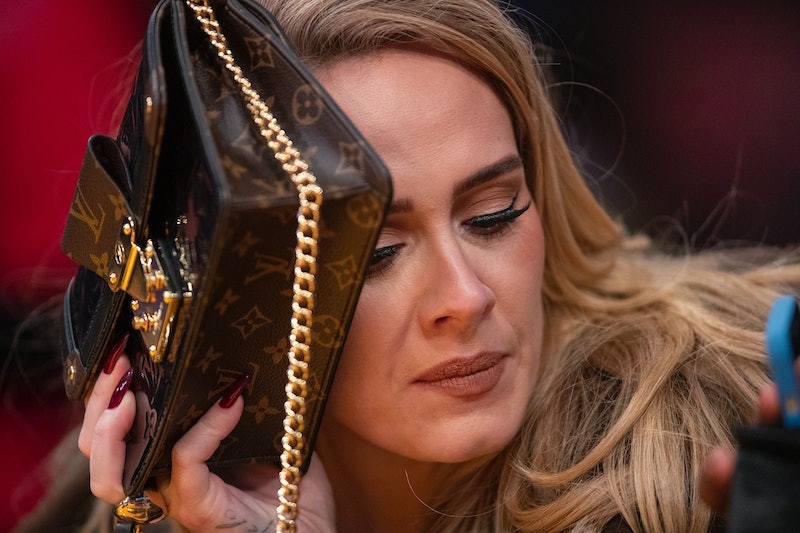 Adele’s highly anticipated new album 30 is about “divorce, babe,” she recently said in an instantly meme-able Instagram Live. But most importantly, it’s a letter to her son Angelo that details why she upended his life by divorcing his father Simon Konecki. “I just felt like I wanted to explain to him, through this record, when he’s in his twenties or thirties, who I am and why I voluntarily chose to dismantle his entire life in the pursuit of my own happiness,” she told British Vogue.

No song on 30 embodies this more than “My Little Love,” a groovy, trip-hop-influenced R&B ballad that’s written solely to Angelo — and even features his voice. Adele revealed to U.S. Vogue that she wrote “My Little Love” in the studio the day after Angelo told her something that rocked her to the core when he was just six years old. “He said to my face, ‘Can you see me?’,” she recalled. “And I was like, ‘Uh, yeah.’ And he was like, ’Cause I can’t see you.’ Well, my whole life fell apart in that moment. He knew I wasn’t there.” In another interview with Zane Lowe on Apple Music 1 in November, Adele said, Angelo “plucked up the courage to very articulately say to me, ‘You’re basically a ghost. You might as well not be here.”

On the song, however, Adele is more present than ever, directly calling Angelo “my little love” and owning up to her mistakes. “I don’t recognize myself in the coldness of the daylight, so I ain’t surprised you can read through all of my lies,” she sings in the second verse. “I feel so bad to be here when I’m so guilty. I’m so far gone and you’re the only one who can save me.”

“My Little Love” is interspersed with voice memos of conversations that she had with Angelo about the divorce, which she started recording at her therapist’s suggestion. “I thought it might be a nice touch, seeing as everyone’s been at my door for the last 10 years, as a fan, to be like, ‘Would you like to come in?’,” she said. The recordings are true glimpses of her life with Angelo and how she navigated a tumultuous time for both of them, with fans hearing him speak for the first time.

In one recording, Angelo tells his mom that he doesn’t feel like she loves him, which Adele handles with reassurance. “Your know mommy doesn’t like anyone else like I like you, right?” In the most candid voice memo, she tells Angelo why he may have felt that way. “Mummy’s been having a lot of big feelings recently,” she tells him. “Like how?” he responds sweetly. Adele softly tells him that she’s been feeling “confused,” and when he asks why, she answers honestly. “I don’t know, and I feel like I don’t really know what I’m doing,” she says. “Oh, at all?” he asks. “At all,” she confirms.

The song concludes with a voicemail Adele left for a friend on an “anxious” day, revealing inner thoughts that she couldn’t even tell Angelo, but which could be healing for him in the future:

“I’m having a bad day. I’m having a very anxious day. I feel very paranoid. I feel very stressed. I have a hangover, which never helps. I feel like today is the first day since I’ve left that I feel lonely, and I never feel lonely. I love being on my own ... Maybe I’ve been overcompensating, being out and stuff like that to keep my mind off of him. And I feel like today I’m home, and I wanna be at home. I just wanna watch TV and curl up in a ball and be in my sweats and stuff like that. I just feel really lonely. I feel a bit frightened that I might feel like this at all.”

Adele hopes fans who have faced a similar situation can relate to her and Angelo’s experience, she noted in her Apple Music 1. While I was writing it, I just remember thinking of any child that’s been through divorce or any person that has been through a divorce themselves or anyone that wants to leave a relationship and never will,” she said. “We all have our own expectations of our parents. Once we become a parent ourselves, I feel like we tend to be like, oh they did a s**t job. But in reality it’s f***ing hard. And then you’re like Jesus. Yeah of course. I feel like it was important for me to tell Angelo’s story and be like, it was hard and I wasn’t doing a very good job at the most wild moment of his life probably.”

More like this
Meghan Trainor & Daryl Sabara Are Expecting Their Second Baby
By Jake Viswanath
Adam Levine & Behati Prinsloo Welcome Their Third Child Together
By Jake Viswanath
Hilary Duff's Husband Matthew Koma Has Her Name Tattooed On His Butt
By Jake Viswanath and Stephanie Downs
Cat Burns Explores A Deeply Personal Struggle In “People Pleaser”
By Catharina Cheung
Get Even More From Bustle — Sign Up For The Newsletter
From hair trends to relationship advice, our daily newsletter has everything you need to sound like a person who’s on TikTok, even if you aren’t.