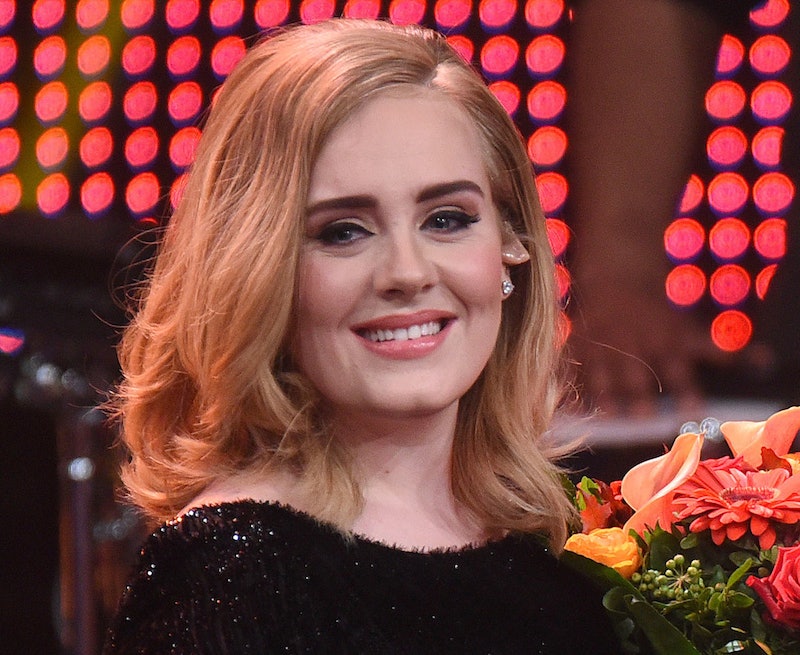 Singer-songwriter (and now self-proclaimed cat lady) Adele just addressed her love life on social media — well, kind of. After hosting Saturday Night Live last weekend, the "Hello" singer took to Instagram on Wednesday, Oct. 28, to thank the cast and crew of the NBC sketch comedy series. And while it might seem like your standard, run-of-the-mill Instagram post, the singer ended the message with a nod to reports that emerged early Wednesday, claiming that things are "heating up" between the singer and British rapper Skepta.

"Had the best time on SNL! Thank you to the most wonderful cast, crew, writers and producers," Adele wrote alongside an image of her on the world-famous stage. "What a sublime bunch of people you are." She also thanked creator Lorne Michaels and Maya Rudolph ("my comedy and Mama hero!") before adding that she hosted the show "for the joy of it," and that she hopes her fans enjoyed it as well.

"Good luck with the election America," the singer continued, reminding her U.S. fans to "look after each other" during these uncertain times. Before signing off, though, she closed out her caption by squashing those pesky dating rumors once and for all. "I'm going back to my cave now to be the (single) cat lady that I am!" she added. "Peace out til next year."

Adele's caption (and the update on her relationship status) comes after a source close to the singer told People that the fellow Tottenham, London natives are more than just friends."They run in the same circles in London," the source said, adding that she's "having fun."

While Adele has now confirmed that she and Skepta are not a couple, it's no secret that the two are good friends. The rapper opened up about their friendship in an interview with Evening Standard in November 2016. "Adele texts me all the time and keeps me in check," he said. "She speaks to me about how things are going ... She's the biggest artist in the world, and you do not see her in the papers [every day]."

Adele was previously married to Simon Konecki, an investment banker turned charity boss, between 2016 and 2019. The two announced their separation in April 2019. Together, they share a 7-year-old son named Angelo. The couple appeared to have separated on good terms, too, with their representative citing their commitment to "raising their son together lovingly." In sum, it appears that, for now, Adele is living her best single cat lady life with her son by her side.

More like this
Rhys Ifans Has A Good Reason For Keeping His Love Life On The DL
By Maxine Harrison
Who Is Nick Cannon Dating & How Many Kids Does He Have?
By Jordyn Tilchen and Radhika Menon
Gigi Hadid’s Dad Shared What He Knows About Those Leonardo DiCaprio Rumors
By Brad Witter
Justin & Hailey Bieber’s Relationship Is “Unbreakable” After Their Two Health Scares
By Bustle Editors
Get Even More From Bustle — Sign Up For The Newsletter