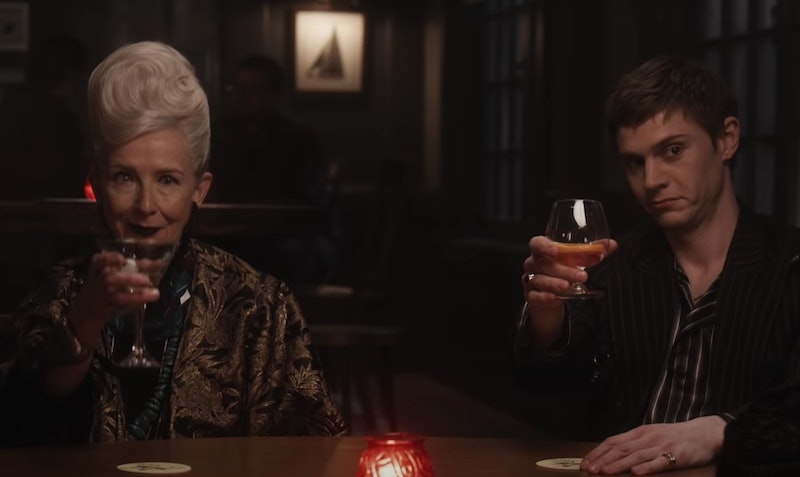 Little is known about the plot of American Horror Story Season 10 beyond that it will be split into two parts. Part 1, titled “Red Tide,” follows a struggling writer (Finn Wittrock) who moves to the isolated coastal town of Provincetown, Massachusetts with his pregnant wife (Lily Rabe) and their daughter (Ryan Kiera Armstrong) in the hopes of getting his creative juices flowing. But the residents prove to be more eccentric than they expected, and his attempt at fixing his writer’s block ends up having devastating consequences. Part 2 is titled “Death Valley,” but it’s unclear what the story is or how it will connect to the first half — if at all.

Despite the limited information, fans have come up with plenty of theories about what the season will entail. Read on for the most popular ones below.

Series creator Ryan Murphy shared a cover image for the season which shows an alien wrestling with a vampire on a beach. (There’s also one of an alien washed up on the beach, and what looks like an alien sharing a black pill with a monster.) Though they may all be misleading images meant to pay homage to old B-grade horror movie double features, it’s also quite likely that aliens will be featured in Part 2, Death Valley. When asked about the possibility in a Harper’s Bazaar interview, star Sarah Paulson just smiled and said, “I plead the Fifth. Everyone’s going to think that’s me confirming it. I just think it’s possible.”

It’s a siren, not a vampire

In April, Murphy tweeted a poll of four possible AHS storylines to “expand the universe.” At the time, fans didn’t know if he meant for Season 10 or for a new spinoff. Murphy never confirmed the most popular choice, but fans surmise that the winner was sirens. We won’t know for sure until we see the new season, but the teaser images of skulls with sharp teeth in the water certainly hints at killer mermaids.

The season is an homage to The Lost Boys

Alternatively, Reddit user Wolfface12 theorizes that the sharp-toothed creatures are indeed vampires, and could be a reference to the film The Lost Boys, which follows a group of vampires in a beach town in California. The season is set by the beach — first in Provincetown and then seemingly California — so it’s not unfounded.

Another Reddit user theorizes that the location and the focus on a struggling writer in New England means that the season is paying homage to Stephen King. Additionally, they surmise that the sharp teeth signal cannibals, and that the town itself is a “hellmouth” where the ghosts of the cannibal’s victims get stuck. It sounds wild enough to be an actual American Horror Story plot, and a scene in the trailer — in which Finn Wittrock stares intensely at his wife’s bloody finger — suggests cannibalism may not be too far off-base.

The season is about pod people

In an interview with TV Guide, Murphy teased that Episode 8 of AHS: 1984, included a clue about the Season 10 theme. The season featured conspiracy theorist Bruce as well as a National Enquirer reporter obsessed with urban legends, leading to a fan theory that Season 10 will be about "pod people." Fans think the new season is cryptid or alien-themed, and that they’re in town creating “pod people” to do their bidding within their shady...multi-level marketing organization. It’s a little far-fetched, but stranger things have happened on the show.

American Horror Story has a history of alluding to real killers and crimes, and fans have speculated the same is true for Season 10. As filming for “Red Tide” took place in Provincetown, locals speculate that Murphy will reference The Lady of the Dunes — a murdered woman who washed ashore on Race Point Beach in 1974 — or the Provincetown serial killer Tony Costa, who killed and dismembered multiple women in the late 1960s.

More like this
'Ramy' Will “Probably” End With Season 4, According To Ramy Youssef
By Brad Witter
'Reservation Dogs' Season 3 May Finally Mend Bear & Willie Jack’s Relationship
By Gretchen Smail
UK Viewers Will Have To Wait To Watch The Handmaid’s Tale S5
By Maxine Harrison
18 Principal Ava Quotes That Prove She's The Queen Of Shade On 'Abbott Elementary'
By Grace Wehniainen
Get Even More From Bustle — Sign Up For The Newsletter