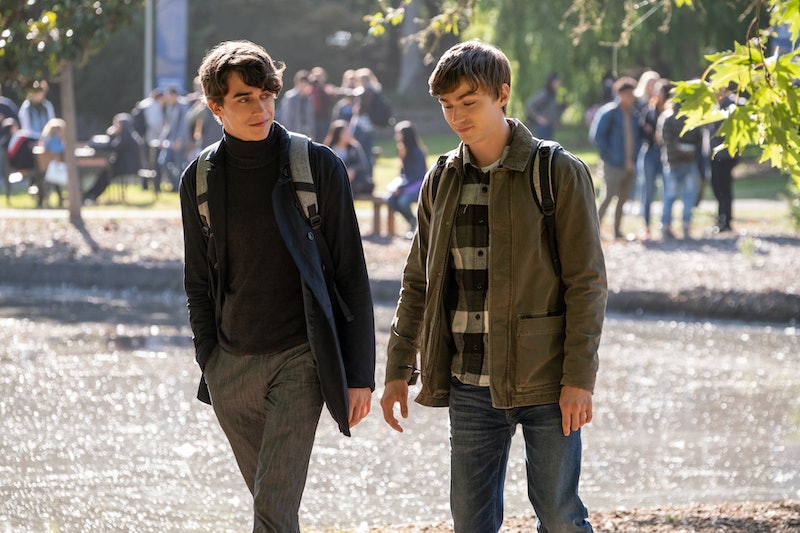 Spoilers ahead for 13 Reasons Why Season 4, Episodes 1-4. Last season, fans were introduced to Winston Williams, a student at the nearby Hillcrest school. Winston was with Monty the night Bryce died and is convinced that it was Clay and his friends who framed Monty for Bryce's murder. In Season 4, Winston changes schools to go to Liberty with Clay and the coverup crew, seemingly in an attempt to get evidence to prove Monty's innocence. But while there, Winston starts a relationship with Alex on 13 Reasons Why that seems genuine. That's what makes it even sadder when the friend group pushes them apart.

From the moment Clay sees Winston, he's concerned that Winston will be able to gather information to take the friend group down. But Clay and his girlfriend Ani are the only ones who know how Winston is connected to Monty. So when Alex meets Winston, he has no idea that he may be at the school for nefarious reasons. The two initially strike up a friendship in the second episode of Season 4 during a school trip to visit a local college. Alex opens up about his suicide attempt from Season 1, and Winston tells him that he's glad he made it through and gently touches Alex's hand. Alex recoils and says that he's not gay. However, in the previous episode, Alex kissed his friend Zach, so it seems like Alex is trying to figure out his sexuality and is just not ready to publicly express that yet.

By Episode 3, Alex finds himself more and more drawn to Winston. Initially they only hang out in a group with their mutual friend Tyler, but when Tyler is busy one night, Winston and Alex go bowling alone together. It's there that they share their first kiss and they later make out again in the hallway of the Valentine's Day dance. Ani sees this and later tells Clay that Alex and Winston have grown close. On the school camping trip in Episode 4, Clay confronts Alex.

"Winston can alibi Monty for the night of Bryce’s murder," Clay tells Alex. This is a big deal, because the person actually responsible for Bryce's murder is Alex. In Season 3, Alex pushed Bryce off the dock and into the water where he drowned. The fact that Winston both failed to disclose his relationship with Monty to Alex and knows Monty is innocent is too much for Alex to take. He tells Winston that he can't see him anymore. It's clear that Winston is crushed, and he asks what he did wrong, but Alex walks off.

Later, in the woods, Alex laments to Tyler that Winston was only their friend "so he can find out who really killed Bryce." Alex felt his trust was betrayed: not only by Clay who kept Winston's past a secret, but by Winston who may have had a motive to come to Liberty that he didn't tell Alex about.

That night, around the campfire, the students are asked how the weekend changed them. Winston speaks first, looking directly at Alex. "It's great to finally be part of the Liberty community. To see how folks really are. I didn't know before, so that's really great." There's a tinge of sarcasm in his voice as what he's learned about Liberty is that he isn't welcome there, not even by Alex whom he thought he could trust.

Winston knows it was Clay who pushed Alex to break up with him and it's possible that a spurned Winston will now really try to get proof that Clay and his friends killed Bryce and covered it up. Because while Winston's motives for transferring to Liberty are still unclear, the one thing we know for sure is that he really liked Alex.