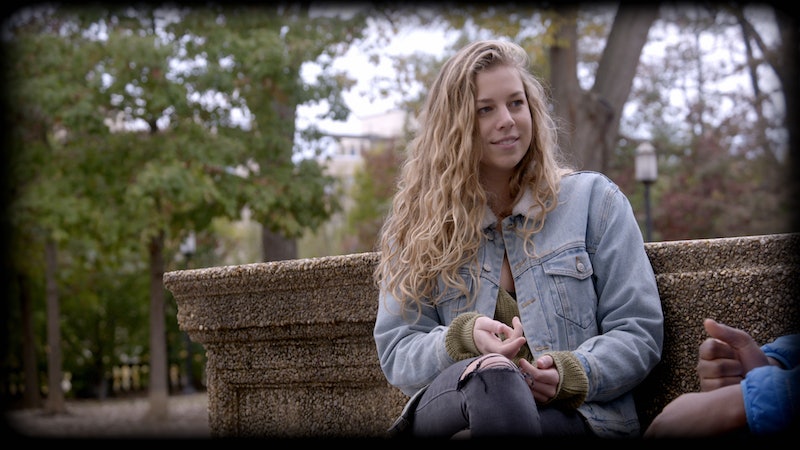 On the new Netflix reality show Deaf U, Alexa Paulay-Simmons quickly emerges as a cast member who understands how the genre works. In the first episode she divulges that she's been on a wild streak recently, going out a lot and dating guys who were below her standards. She even confronts an ex-boyfriend about getting pregnant the previous year: "Did you get me pregnant on purpose? Were you trying to trap me?" she asks. Still, for all her made-for-reality-TV confessions, there's some background information that producers can't shoehorn into the episodes. For that we combed social media to find everything you need to know about Alexa from Deaf U.

Alexa's decision to attend Gallaudet was a literal homecoming for Alexa. According to her Facebook page, she's originally from Frederick, only an hour from the university's D.C. campus. As a kid, Alexa attended the small city's Maryland School for the Deaf, which is a free public school that's over 150 years old. It's also why she's considered part of Deaf U's "elite clique," comprised of students whose families have been deaf for generations or who went to all-deaf high schools.

Before enrolling at Gallaudet, Alexa started college at the University of Hawai'i.

For a while, Alexa's Instagram feed was a steady stream of bikini shots and white sand beaches. Up until she announced in 2017 that she would be transferring to a university for the deaf and hard-of-hearing that was much closer to home, that is. U of H was Alexa's first experience learning on a hearing campus and using interpreters. She described the decision to transfer as a chance to again "be submerged in the beauty of our culture and language."

Her relationship with her dad is complicated.

Alexa talks a lot about how her relationship with her dad has affected her behavior in romantic relationships, even going so far as to diagnose herself with so-called daddy issues on Deaf U. Still, despite his emotional shortcomings, her dad was supportive of Alexa's decision to attend college on the other side of the globe. In this video the pair made with Allstate Insurance, he confesses how hard it was to say goodbye to her. "I thought it would be no big deal," he signs. "As I'm driving to the airport and it's getting closer to time to drop her off, it really broke my heart."

She still seems to be hanging out with Braxton.

While there are exactly zero photos of Alexa's on-and-off boyfriend Braxton on her account, there is this sly mention in a post from August, not to mention the sliver of tattooed forearm that's holding onto her. Alexa credits Braxton (@b_greaaat) with convincing her to confront her aquaphobia and actually submerge during a summer trip to a waterfall.

There's also this Facebook post written around the same time, which at least suggests she was dating someone: "I’m interested in possibly renting out a place or a room with my boyfriend in D.C."