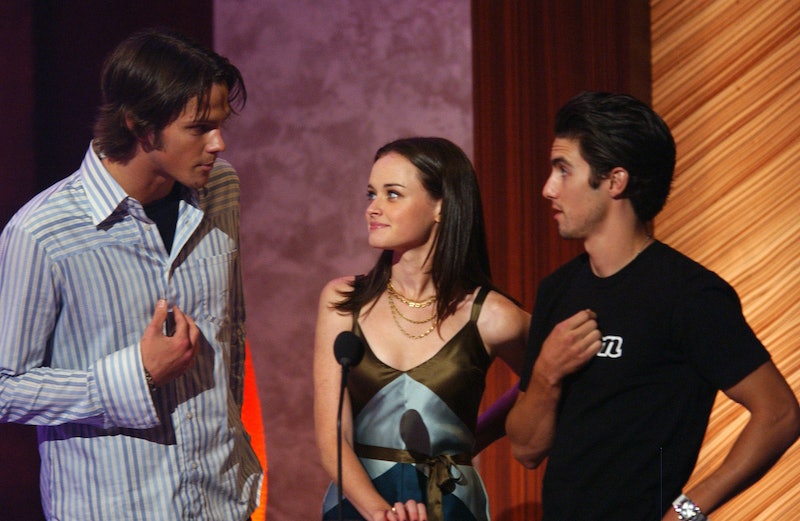 The debate rages on: Should Rory Gilmore have ended up with Jess, Dean, or Logan? Well, Alexis Bledel was just asked to pick her favorite Gilmore Girls love interest during an appearance on the Watch What Happens Live aftershow on May 22 — and she gave an inconclusive answer more than 20 years after the premiered. Bledel, who participated in a game called “Rory Spill More,” was asked which of the Gilmore guys she thought would have been best for her character to end up with.

The Handmaid’s Tale star had a diplomatic answer to the age-old fan debate that has raged on since the original series’ 2007 finale and its 2016 revival. “Jeagan,” she said, combining the names of the three characters. “I cant single somebody out.” The non-answer shows that Bledel, much like the Gilmore Girls fandom, has not come to a clear conclusion on this issue.

Two decades after the show debuted in October 2000, Gilmore Girls fans are still arguing over their favorite love interest, making pro-con lists about which boyfriend was the dreamiest or had the best personality. Should Rory have picked original boyfriend Dean, played by Jared Padalecki, literate bad-boy Jess, played by Milo Ventimiglia, or misunderstood newspaper-heir Logan, played by Matt Czuchry? The show never offered an answer, as Rory ended up picking her career over a proposal in the series finale.

Gilmore Girls: A Year In The Life, the revival season which aired on Netflix in 2016, further intensified this debate. The four-episode season ended with a cliffhanger, with Rory revealing to her mother that she was pregnant, but the series never clarified who was the father. To further complicate matters, Jess can be seen wistfully looking at Rory through a window, suggesting the two might have unfinished business. Dean, on the other hand, was happily married with children so that’s probably out of the question.

When the Gilmore Girls: A Year In The Life aired, Lauren Graham, who played Lorelai Gilmore, also avoided choosing who her television daughter should’ve ended up with during an interview with TVLine. “What I love about all those guys is how different they are — isn’t that what we all go through until we settle down?” she said. “We kind of check out which version of ourselves we want to live with? I think that’s very real for someone in their 30s.” Graham yet again left fans to fight among themselves — or left the door open for a future revival to settle the debate once and for all.