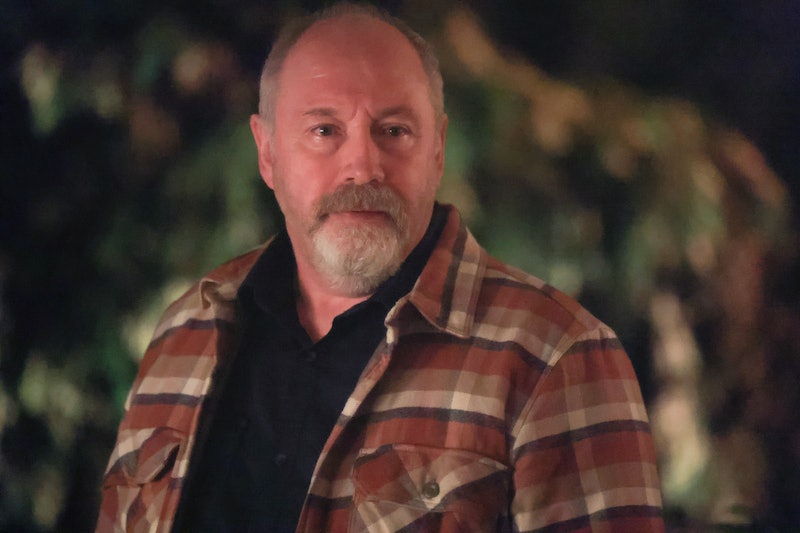 Many fans are convinced that Alex's dad, Reverend Stewart, intentionally hit Eddie with his car on A Million Little Things. And since then, the show has been hinting that he wants to finish the job. The reverend has been lingering around Eddie's house, and during the final moments of the Dec. 3 episode, he showed up at the door. When Eddie's son Theo answered, the reverend seemed taken aback and made up an excuse about having the wrong address — but not before telling Katherine, "You've got a nice kid there. Make sure you enjoy every moment." For half a second, I was like, umm... is Reverend Stewart going to kidnap Theo? He ended up walking off, but it's clearly not the last we'll see of him. However, his intentions may not be as sinister as they appear.

Alex's dad is still grieving his daughter's death, which he blames on Eddie for because she drowned while the two were partying as teenagers. The reverend was also there the night Eddie was hit by a car that looked suspiciously like his own red truck, so reason would assume that he's the one who hit Eddie out of revenge. And when the reverend was stalking Eddie outside of his house, it seemed like he was mad that Eddie survived. But what reads as anger onscreen may actually be remorse. As showrunner DJ Nash told Us Weekly, "It's possible that the reverend himself needs to confess something."

Nash also hinted that it wasn't necessarily Alex's dad who hit Eddie, even though the show has certainly made it seem like it. "Some may feel it's the drunk guy at the bar. Some may think it's Alex's dad or somebody else altogether," Nash said.

We saw Alex's dad calling 911 to help Eddie, but he didn't stay at the scene. It's possible that the reverend was following Eddie that night and saw him get hit and did the right thing and called 911, but did the wrong thing in not staying to see if he could help. Or maybe the reverend hired someone to make the hit and now he feels guilty. In any case, it doesn't seem like he wants Eddie dead. The 911 call helped save Eddie's life, and Nash's hints about the reverend needing to confess could explain why he's been hanging around Eddie's. Maybe he just wants to apologize.

"I do think regret is certainly something that this man is carrying," Nash told TV Insider. "He's a reverend and we see him outside their house with the Bible on his passenger seat and I think there's a whole bunch he's trying to process." He did seem to be sort of in shock when Theo opened the door, as if he'd never considered that maybe Eddie had a child of his own. Perhaps that knowledge will help the reverend calm down a bit. After all, Eddie isn't the same man who couldn't save Alex all those years ago.

Whatever is happening with Alex's dad, we'll have answers soon enough. "It's certainly resolved in the first part of the season," Nash promised Deadline. "We will learn a lot very fast. I'm not a big fan of making our fans wait. I like to tell that story and move to the next one."

More like this
Caleb McLaughlin Details Racism From 'Stranger Things' Fans
By Radhika Menon
'School Of Rock' Changed Joe Keery's Life Forever
By Alyssa Lapid
How Much Are The 'Schitt’s Creek' Stars Worth?
By Hugh McIntyre
The ‘Kevin Can F**k Himself’ Season 2 Finale Twist Is A Full Circle Moment
By Grace Wehniainen
Get Even More From Bustle — Sign Up For The Newsletter