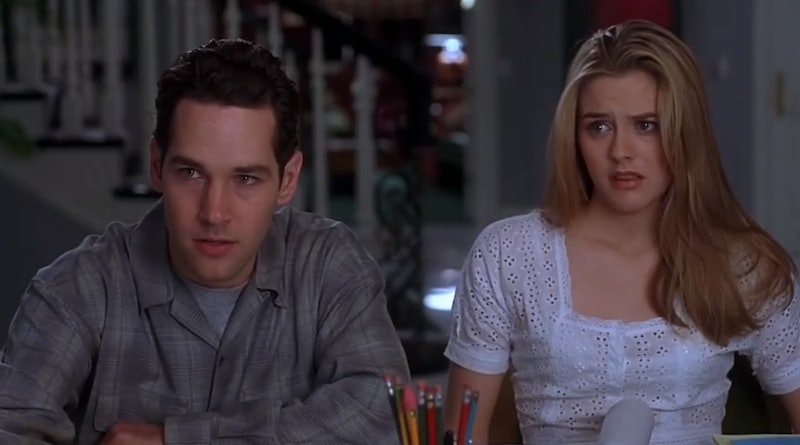 The fashion, the slang, the questionable romance between step-siblings — Clueless has quite the legacy, and no one is more keenly aware of that than the movie's star. In a new interview tied to the film's 25th anniversary, Alicia Silverstone reflected on Clueless' Josh and Cher, and their controversial romance as former step-siblings. And no, the relationship didn't leave her buggin', despite the potential ick factor.

If you've seen Clueless, you likely have an opinion about Cher and Josh. Some fans think they're the perfect couple, while others take issue with the age gap (she's 16 and he's a college freshman). However, perhaps the most common objection to the pairing is that they were step-siblings prior to their coupling. As Cher so eloquently tells her dad early in the film when she's complaining about Josh hanging around, "You were hardly even married to his mother and that was five years ago."

Silverstone definitely clocked the weirdness during filming as a teen herself, but she told Vogue that she didn't remember "having a point of view on it." She explained, "I mean I know we're not blood, so it's not like illegal in that way. But it is really weird when you think about it (laughs). I mean it's a funny thing to grow up that way, but then again they weren't related. It’s very unusual, but it's cool!"

While fans have been debating the appropriateness of Cher and Josh's happy ending for two decades now, for director Amy Heckerling the pairing was inspired by her real life. "My grandparents were stepbrother and stepsister. And they met when they were teenagers," she told Yahoo in a new interview. "They fell in love, but they were always fighting and, you know, into their late 80s, they were still fighting with each other. I mean, like, cats and dogs fighting. So it never seemed strange to me."

"I think people identify with Cher's heart and her willingness to change and grow because of how silly she was," she said of the movie's continued popularity. "She was trying hard to evolve because of her sweet Josh. I don't know how to explain why or what made Clueless what it was, but I know it happened and I know that people continue to love it."

And weird or not, plenty of people still love Cher and Josh's romance, too.