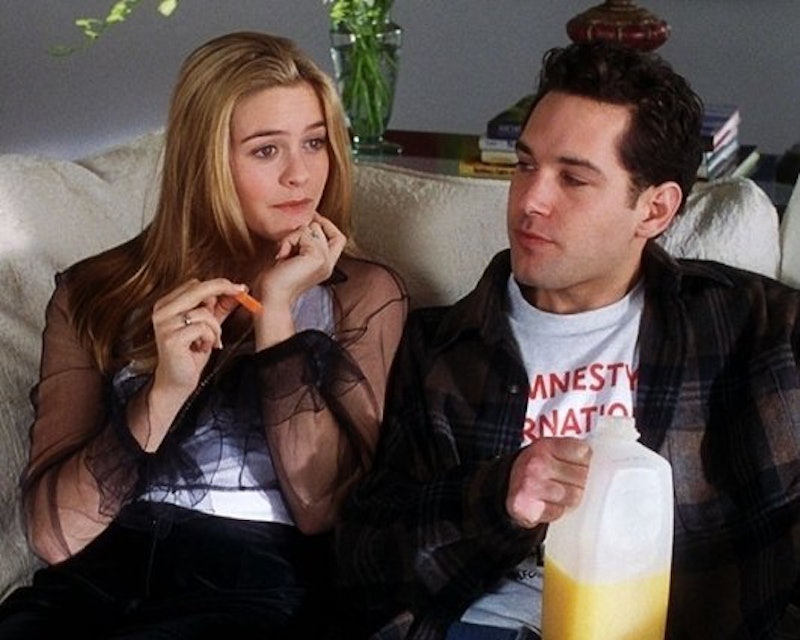 If you had told me when Clueless came out in 1995 that the guy who played slimeball Elton was poised to star as one of the most romantic heroes of the '90s, I would have told you, "As if!" Duh. Jeremy Sisto's portrayal of Elton in the '90s classic was so convincingly sleeze-tastic, it was hard at the time to imagine him as anything other than a painfully handsome antagonist. Of course, I was also 10 at the time the movie came out, so I didn't quite grasp the concept that actors can showcase their skills by taking on a ton of different types of roles. In the years since, Sisto has gone on to prove his versatility with roles in Six Feet Under, Law & Order, and Suburgatory, among others. But did you know that in 1997, Sisto was poised to be one-half of Titanic's super couple by being cast as Jack Dawson?

I know you might be totally buggin' over this shocker, but there is actually a screen test featuring Sisto performing alongside Kate Winslet, who wowed us all as Titantic's leading lady, Rose DeWitt-Bukater. It's hard to picture anyone other than Leonardo DiCaprio as Jack, but I have to admit Sisto is impressively swoon-worthy in the clip.

As romantic as the above clip — not to mention Jack and Rose's love story in general — is, the appearance by the Clueless alum reminds me that the 1995 comedy he did star in had its own love story that could rival — nay — trump any coupling that even the most Oscar-worthy of films could have bestowed. No, I'm not talking about Elton and Cher (Alicia Silverstone), but Cher and Josh (Paul Rudd). It may have taken a while for the two to realize their feelings for each other, but I legit still have to fan myself over the sizzling chemistry between these two. IMHO, the couple was able to make us swoon more than Jack and Rose — #SorryNotSorry. Do you doubt me? Let's take a look at the evidence...

1. Love-Hate Dynamics Are Always A Win

Although we could always tell both loved each other from the start, their love-hate relationship added to their onscreen sizzle.

Jack may have had some skill on the dance floor, but the adorable awkwardness of those with two left feet makes my heart flutter more than moves worthy of Dancing With The Stars.

3. Their Flirting Sessions Were Everything Ever

They were cuter than a pile of puppies.

4. They Balanced Each Other Out

If there was ever a doubt that opposites attract, just refer to these two.

5. They Were Always There For Each Other

And unlike Rose, Cher really did "never let go."

Remember the moment that Josh stands up for Cher to that heinous lawyer, and tells her how beautiful and smart she is? Game over, man. GAME. OVER. That scene has to be one of the cutest — nay — the cutest and most romantic scene of the '90s. I shipped these two so hard!

7. Their Kiss Scenes Could Make You Faint From Swooning Too Hard

The film took its time building the anticipation until these two finally kissed, and it was well worth the wait!

No disrespect to Jack and Rose, but — as far as movie couples go — Cher and Josh will always have my heart. Excuse me while I go re-watch Clueless for the fifth time this week.