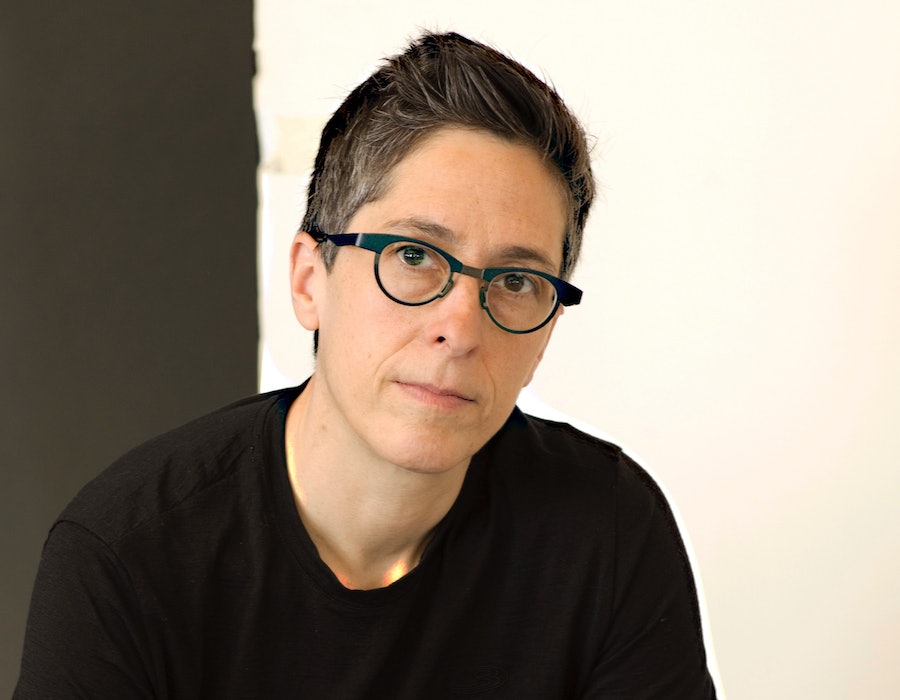 Alison Bechdel wanted to write a book about exercise. It would be fun, she thought, to tackle a lighter subject — to dwell on decades of American fads, from cycling to spinning, jogging to HIIT — after spending years excavating her family’s trauma. “But it pretty immediately got more complicated,” the author tells Bustle.

The graphic novel she eventually published, The Secret to Superhuman Strength, is complicated. It would hardly be a Bechdel work if it wasn’t.

It’s a sprawling tome, touching on everything from The Sound of Music to Zen Buddhism to the importance of a good fleece jacket (Patagonia, after a brief flirtation with L.L. Bean, became Bechdel’s ride or die.). Born in the round-numbered year of 1960, Bechdel divides her life into decades, and documents her personal history — and evolving exercise obsessions — alongside America’s changing mores. And then there are the literary greats Bechdel paints into her life. Fans of her previous memoirs will recognize this device; Bechdel is nothing if not well-read, and she transposes the writers she carries with her onto the page, sharing tidbits from their own biographies alongside hers. Superhuman Strength casts Jack Kerouac, the Transcendentalists, and the Romantics — some of whom she’d once dismissed as “dead white guys,” only to discover they were more like (dead white) proto-hippies. (And also, not all guys: Bechdel hails Margaret Fuller, a writer in Emerson’s orbit, as “kick-ass.”)

But ultimately, the book is about Bechdel’s lifelong pursuit of ego death. That effort is inseparable from her pursuit of physical strength, as inseparable as the mind from the body (“if you’re lucky,” she notes) — hence the title. And yet, as Bechdel’s taken halting steps toward enlightenment, she’s seen her physical wellbeing begin to decline. “I've always been a little unduly preoccupied with my mortality,” she says. Growing up in a funeral home with a father who worked as an English teacher and a mortician does that to a person.

Bechdel’s father — and his premature death, which she believes to have been by suicide — was the subject of her first graphic novel, 2007’s Fun Home: A Family Tragicomic, which was subsequently adapted into the Broadway musical of the same name. She followed it with 2013’s Are You My Mother?: A Comic Drama, which probes her complicated relationship with her mother. The release of Superhuman Strength makes what once seemed like a natural two-book set now read like the first two installments in a trilogy: after reckoning with her dad and finding peace with her mom, Bechdel’s natural next step was to triumph over herself.

“All of my books in a way, if I look at them, are on some level about the self,” Bechdel says. “And I like to think that they're progressing, and that this book is about getting rid of the self.”

But beyond that, she hasn’t quite discerned how her work “all links up” — or figured out why she feels compelled to share her most intimate memories with the world. When she was working on her serialized comic strip, Dykes to Watch Out For (1983-2008), there was a clearer goal: to show a fictional slice of lesbian life, so as to “feel safer and okay in the world as a lesbian,” and perhaps help LGBTQ people be accepted. It was a big leap to Fun Home, in which she draws herself coming out to her closeted gay father, only to see him die by suicide shortly thereafter — and then attempting to understand those events, puzzling over a childhood spent in a “house of secrets.”

“I don't really know what possesses me,” she says with a tonal shrug.

Unsurety, for the uninitiated, is Bechdel’s brand. As a child, she became so preoccupied with the limits of her own subjective experience that she created a shorthand symbol for “I think,” and scribbled it all over her diary entries. Decades later, she’s unable to flatten her thoughts into anything as certain as a thesis. Writing in panels helps. “I feel like I can't really get very far with just words. I can't figure out what I'm trying to say,” she says. “There's something about that track of images that really helps me to form complete thoughts. What I love about comics is that you can have several things going on at once... There's always a tension between the words and the picture or the scene that I'm showing.” It’s a method of “complicating the story,” she says. It also has the effect of turning the reader into a witness, inviting another to exercise their own subjectivity.

Perhaps it’s the many years she spent in therapy and analysis (two related but separate things, as she notes in Are You My Mother?), but speaking with Bechdel feels like playing a team sport — like we’re working together to crack the meaning of her life’s work. She is eager to pontificate, grateful for any insights, and unafraid to gently push back on any conclusions she thinks might be misplaced.

Or maybe it’s a sign of her growth: Even if she isn’t one with the universe, she’s found a way to respect others’ subjectivity. “It's uncomfortable interacting with someone as an equal subject, as someone else with their own plans and their own subjectivity from which they're looking out at you and the world,” Bechdel says. “I mean, it's kind of horrifying to me to think about all 7 billion people on this planet, all with their own individual perspective. Everyone thinks they're the middle of everything, but how can that be?”

It’s not all that surprising to learn that Bechdel hasn’t cracked the recipe for transcendence — nor that for superhuman strength. All she’s got is what’s helped her reach outside herself, however haltingly. “My practice has been autobiography, has been mining the stuff of my own life and my own struggles as a way of communicating my bizarre subjective experience to other people in hopes that it rings a bell for them,” she says. At first blush, it sounds like wishful thinking. “What's more selfish than writing about yourself all day?” she says, fully aware of the irony. “But I really am making an honest effort to transcend the solipsism.”

'The Secret to Superhuman Strength' by Alison Bechdel
Amazon
More like this
Allie Rowbottom Will Have Her Feminism With A Side of Botox
By Samantha Leach
Steve Banerjee's Wife Irene Sold The Chippendales Brand Prior To Her Death
By Brad Witter
Casey Anthony’s Father Said He Was “Ready To Forgive Her” Before She Renewed Allegations
By Brad Witter
Robert Downey Jr.’s New Film Is A Tender Story of Fatherhood & Forgiveness
By El Hunt
Get Even More From Bustle — Sign Up For The Newsletter