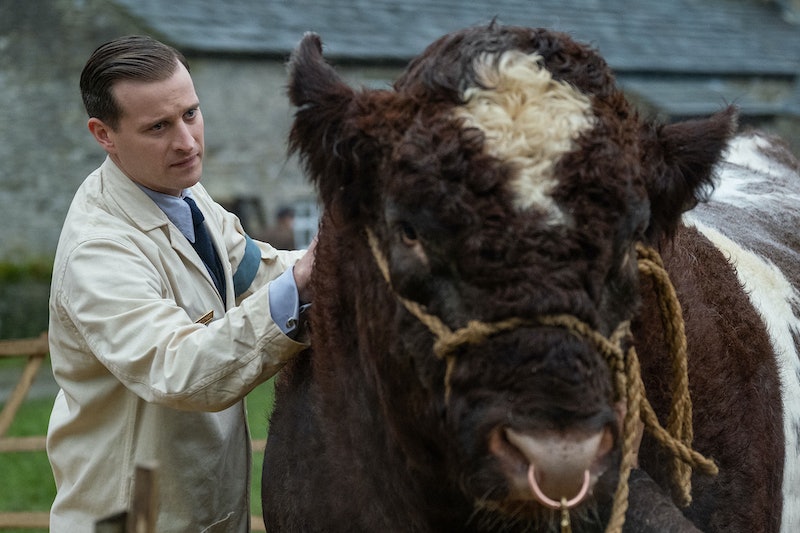 James Alfred Wight's book series All Creatures Great And Small celebrated its 50th anniversary on Sep. 1, which happened to coincide with its brand new TV adaptation. Originally broadcast from 1978 to 1990, the 2020 series sees Nicholas Ralph take over the role of veterinary surgeon James Herriot. But who Nicholas Ralph, and what drew him to this iconic British character?

A Scottish actor from Nairn in the Highlands, All Creatures Great And Small is actually Ralph's first major acting role since graduating from the Royal Conservatoire of Scotland in 2017, per entertainment site HITC. He's got a lot of experience off-screen though, and has appeared in dozens of stage plays with the Royal Conservatoire and the Royal Shakespeare Company. He's also starred in two films — The Devil's Light as Father Raymond and The Wife as a vocalist. Ralph also played Alan Breck Stewart in the BBC Radio Scotland Production of Kidnapped, as detailed by his official bio.

To land a role like James Herriot as a newcomer is a pretty daunting task, but Ralph found a deep connection to the character through their shared "passion and commitment" to their fields of veterinary work and acting. "Once I found acting, I was completely enveloped in it — and haven't looked back," he told Irish News. "He has little intricacies; sometimes he can be a little socially awkward... Little quirks that I could identify with. I had fun with them as well."

The actor was also excited to work with Samuel West (Mr. Selfridge, On Chesil Beach), "obviously a veteran of the industry", saying he was lovely to work with and very helpful. West plays fellow vet Siegfried Farnon. "Any questions I had, he was there for me," Ralph explained. "He put me at ease straight away and, it's maybe a bit corny, but I genuinely did feel at home on that first day."

Alongside Ralph and West, actors Callum Woodhouse (The Durrells in Corfu) and Rachel Shenton (Switch at Birth, White Gold) will play Tristan Farnon and Helen Anderson. The first series of All Creatures Great And Small will consist of six episodes and Christmas special, per Radio Times, and has since been renewed for a second series. "We hope this will become a regular part of the Channel 5 schedule, and we're using this time [during the pandemic] to develop the next season," executive producer Colin Callender told Radio Times.

More like this
'Abbott Elementary' Fans Probably Missed This 'Parent Trap' Easter Egg
By Sam Ramsden
Yes, 'The Price Of Glee' Is Available To Watch In The UK
By Catharina Cheung
Adam Ali Hopes 'Waterloo Road' Will “Subvert” Queer Misconceptions
By Sam Ramsden
This First Look At 'The Gold' Shows Jack Lowden In A Whole New Light
By El Hunt and Sam Ramsden
Get The Very Best Of Bustle/UK
Sign up for Bustle UK's twice-weekly newsletter, featuring the latest must-watch TV, moving personal stories, and expert advice on the hottest viral buys.