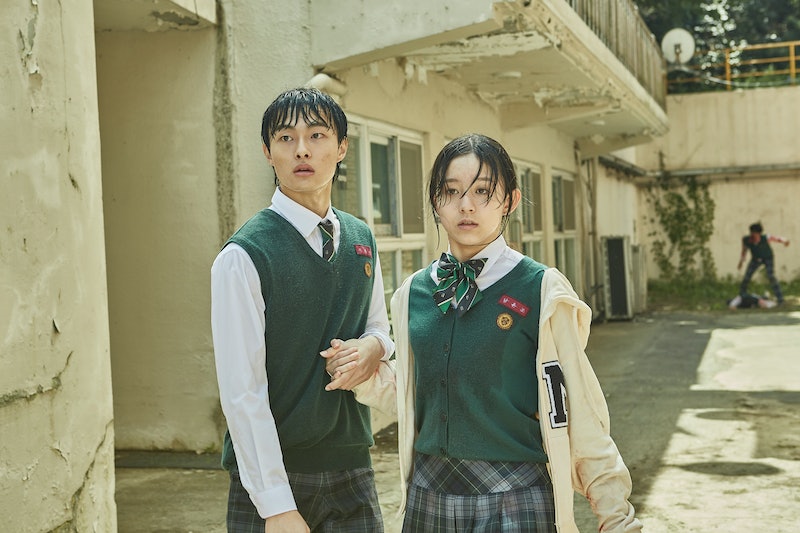 Netflix’s South Korean thriller All Of Us Are Dead combines a coming-of-age story with a zombie survival tale. The series is based on the South Korean webtoon Now at Our School and follows a teen girl named Nam On-jo (Park Ji-hu), a student in Class 2-5 at Hyosan High School in the fictional setting of Hyosan City. After a science experiment gone wrong, the school is overtaken by zombies, and she along with the rest of her classmates must fight to evade death and attempt to reach the quarantine camps being operated by the military.

Because her father is a firefighter and former solider, On-jo has a set of survival skills that make her particularly apt to withstand the outbreak. The show also features a handful of other characters, including her neighbor and childhood friend Lee Cheong-san (Yoon Chan-young), class president Choi Nam-ra (Cho Yi-hyun), skilled fighter Lee Su-hyeok (Lomon), resident bully Yoon Gwi-nam (Yoo In-soo), and the wealthy Lee Na-yeon (Lee Yoo-mi).

Season 1 concludes with some survivors reaching safety, but others aren’t so lucky. And there’s still plenty to make sense of given several cliffhangers and that survival is still far from guaranteed. Let’s break down the ending.

Who Dies On All Of Us Are Dead?

Only a handful of characters make it out of Hyosan City. In the beginning, the kids use sports equipment to build a barricade and stave off the zombies, which is an effective strategy until On-jo’s father So-ju (Jeon Bae-soo) arrives in an attempt to rescue them. So-ju is forced to sacrifice himself while the rest of the students escape through the tennis courts. Later, Nam-ra is bitten by a zombie but doesn’t transform completely. Instead, she becomes what’s known as a halfbie (half human, half zombie) and absconds from the group after realizing that she can no longer contain her bloodlust.

All told, the six students still standing at the end are Class 2-5 members On-jo, Su-hyeok, Dae-su, and Hyo-ryung; archery phenom Jang Ha-ri (Ha Seung-ri); and Park Mi-jin (Lee Eun-saem), a senior with a bad temper. However, the final tally doesn’t account for the halfbies still stalking the streets — including Cheong-san and Gwi-nam, who were last seen being engulfed in the explosions meant to eradicate the zombies. While it’s fairly hard to survive an explosion of that magnitude, it’s not completely unreasonable to believe that one or both — having become resilient undead beasts — made it out alive.

The fate of halfbies is a big open question at the end of All Of Us Are Dead. After bombs decimate Hyosan City, On-jo and co. sneak out of the quarantine camp they’ve been staying at for three months and return to their school, where they spot a fire burning on the roof. There, they reunite with Nam-ra. On-jo tries to convince Nam-ra to return with them, but she refuses, citing her status as a halfbie and her desire to stay with the other halfbies currently infesting the school.

Sensing more halfbies are making their way to the roof, Nam-ra leaps from atop the building, knowing that halfbies can take more damage than full zombies. On-jo and the rest of the students peer over the ledge and see something that viewers are never shown, though we do see the group’s aghast faces. Are there more halfbies than they expected? Are they more carnivorous than they initially believed? It’s possible their shock is simply the result of seeing their friends and loved ones as flesh-eating zombies, but this adds fuel to the idea that Cheong-san or Gwi-nam could still be alive, given that the bombs seem to have only managed to kill fully zombified citizens and not halfbies.

What Does The Government Want With The Zombies?

The whole reason the zombie outbreak began is because of Lee Byeong-chan (Kim Byung-chul), the scientist who tried to chemically enhance his meek son. Obviously things didn’t go according to plan: his son, Jin-su (Lee Min-goo), turned into the show’s first zombie. At the end of Season 1, government operatives trek into the city to retrieve any and all information about Byeong-chan’s research. In doing so, they find Jin-su and his zombified mother chained up.

Upon returning to their military base, it’s revealed that not only did the government agents bring Jin-su and his mother with them, they’ve also detained a halfbie student and a zombified soldier. It’s unclear if they’re using their subjects to come up with a cure or for something more sinister, being that the original concoction was made to enhance bravery. Either way, the government’s decision to house zombies could prove dire in a potential Season 2, given the likelihood of exponential spread.

More like this
TikTok Pointed Out A Major 'Emily In Paris' Continuity Error
By Sophie McEvoy
Everything To Know About 'Cobra Kai' Season 6
By Brad Witter
'The Crown' Season 6 Has Suspended Filming "Out Of Respect" For The Queen's Death
By Bustle Staff
The Song At The End Of 'The Last Of Us' Ep 1 Has A Deeper Meaning
By Sophie McEvoy
Get Even More From Bustle — Sign Up For The Newsletter
From hair trends to relationship advice, our daily newsletter has everything you need to sound like a person who’s on TikTok, even if you aren’t.