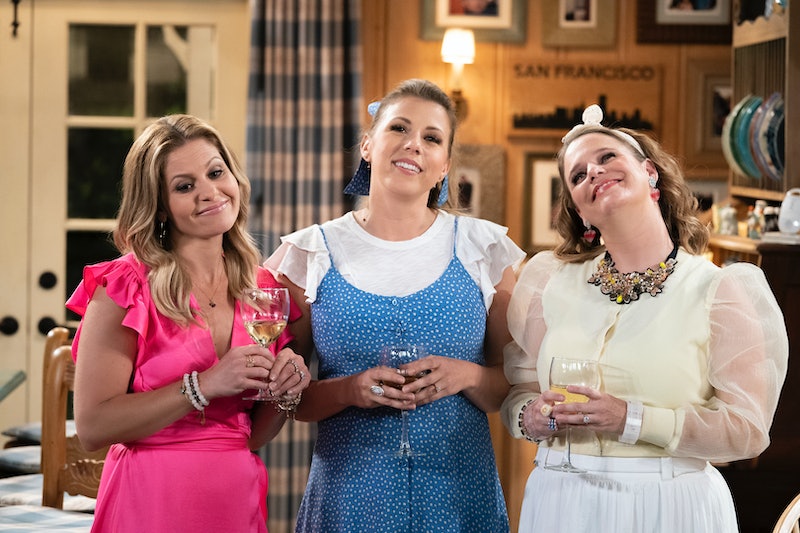 Spoilers ahead for Season 5, Part 2 of Fuller House. Since its premiere in 2016, Fuller House has always included Full House references for original fans of the show. But in its final season, it really doubles down. This is a series that knows its audience — and exactly how much they love these characters.

In the first half of the season, which was released in December 2019, the characters ventured up to the attic, where they uncovered several mementos from the past including Stephanie's bunny wallpaper, Michelle's Rigby doll, and Jesse's Flintstones costume. "We have eight years of carefully curated home movies," Max told Ramona and Jackson, breaking the fourth wall with a nod to the original eight seasons of Full House. "It's almost like a TV show."

In the second half of the season, Stephanie, DJ, and Kimmy go back up to the attic each in search of "something borrowed" to wear at their upcoming triple wedding. They stumble on even more Full House treasures while there, but the attic isn't the only place that Full House easter eggs are hiding. Here are all the references to the original show in Fuller House's last nine episodes.

Stephanie Driving a Car Through the Kitchen

Originally seen in: Season 3, Episode 20, "Honey, I Broke the House"

In Episode 10, Kimmy foreshadows this incident when she's recounting all the strange things she saw at the Tanner house over the years — including people "driving cars through the kitchen."

The actual recreation of this accident comes in Episode 12, and it plays out almost shot for shot how it did in the original. In Full House, Stephanie is pretending to drive Joey's car, which is parked in the backyard, when she decides she needs some music and accidentally puts the car into reverse. It crashes through the kitchen and into the dining table.

In Fuller House, Stephanie goes to drive off in a replica of the very same red car and the gear shift malfunctions, sending her backwards into the kitchen yet again. Instead of Michelle proclaiming, "There's a car in the kitchen" like she did in Full House, the line goes to Tommy.

Originally seen in: nearly every episode. Joey loved to do impressions and Bullwinkle was a favorite.

In the first episode of Fuller House Season 5, Part 2, Joey enters the house but no one is there to greet him. "Hello everybody," he says in Bullwinkle's singsong voice.

In Fuller House Episode 10, Kimmy complains that the Tanners terrorized her pet ostrich, which is funny because Uncle Jesse complained in Full House that the ostrich terrorized him by biting his precious hair. Then, in Episode 17 of Fuller House, Kimmy finds a feather from the bird in the Tanners' attic.

The (Second) Trip To The Attic

Not only do the women find Kimmy's ostrich's feather, but also DJ's old, lips-shaped phone from her bedroom and the earring Kimmy used to pierce Stephanie's ear in Full House Season 6, Episode 10, "I'm Not DJ". It ended up giving her an infection, so it's unclear why the Tanners saved it, but OK.

When she sees the bike, Kimmy jokes that they should stop holding onto it for Michelle, because if she hadn't come to get it by then, she never will, clearly a nod to the fact that the Olsen twins never appeared in Fuller House.

In Fuller House Episode 10, Kimmy says that not only were the Tanners "driving cars through the kitchen [and] terrorizing our pet ostrich, [but] some guy [was] constantly singing the song 'Forever.' That's pretty weird."

The Beach Boys song "Forever" was an iconic tune in Full House that Uncle Jesse sang frequently and even made a hilariously cheesy music video for.

Gia has been a recurring Fuller House character, which makes Stephanie's nightmare in Episode 13 even funnier. She wakes up in a sweat from a bad dream saying, "I don't wanna go to school, Dad. Gia's gonna make me smoke."

It's a reference to the Full House episode in which Stephanie's bad girl friend Gia is smoking in the bathroom and offers Steph a cigarette. Stephanie is able to say no to the peer pressure, but it was a tough moment for her to stand up to her friends.

Originally seen in: Season 4, Episode 6, "A Pinch For A Pinch"

When Uncle Jesse thinks someone bit his daughter Pamela in Episode 15, he wants Pamela to bite the kid right back. It's the same advice Jesse gave Michelle in Full House when she was pinched by another student.

In the original Full House run, Steve and DJ competed in a Newlywed Game-style show that led DJ to realize they didn't know as much about each other as she thought. Fuller House gives the couple a chance to redeem themselves in Episode 16.

To show Stephanie how much he loves her, in Episode 16 Jimmy recreates the dance Stephanie did to "Love Shack" during the Full House telethon. He has the same '90s outfit and everything.

Speaking of the telethon, in Episode 17, DJ finds her old candy prop in the attic and begins singing "Lollipops And Gummy Bears," which she originally performed at the telethon with Michelle.

Jesse Still Gets His Hair Cut By Alejandro

In Episode 18, Jesse mentions that he needs to see his barber Alejandro who is still alive and kicking. As Jesse tells it, he lives because of Jesse's locks. Alejandro was first mentioned in Full House Season 2 as the only person Jesse ever lets cut his hair — well, until Stephanie accidentally took a chunk out of it during a pretend hair salon appointment.

All The Character Returns In The Finale

Kimmy, Stephanie, and DJ's Fuller House wedding reunites a number of characters from the original show, including Gia, Danny's ex Vicky, and Kimmy's ex-boyfriend Duane, who only says "Whatever." But perhaps most exciting is the return of Derek Boyd (Blake McIver Ewing). He was known in the original series as the kid who sang "Yankee Doodle Dandy" in Season 6, Episode 8, "The Play's The Thing" — a tune he reprises in the Fuller House finale as an adult.

Fuller House may be over, but it didn't go out without honoring the original show that came before it in just about every way possible.