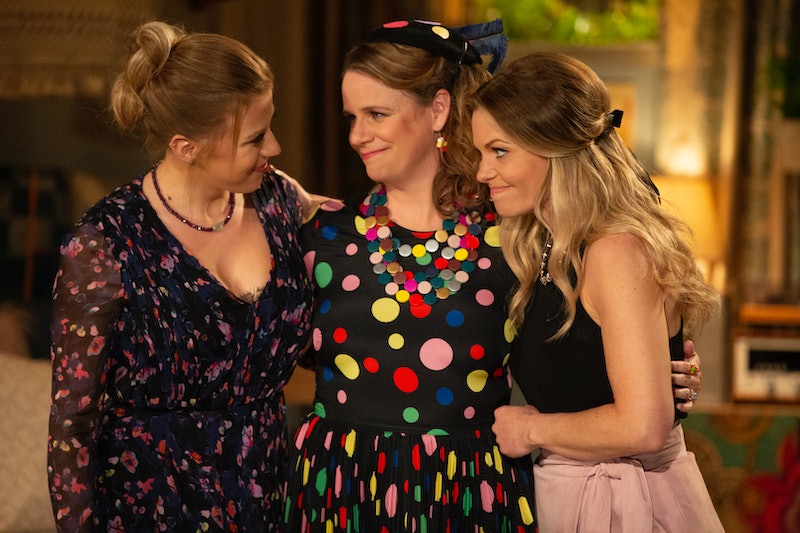 Since its very first season, Fuller House has been making Full House references. Sometimes they're very in your face, and other times they're more in the background for longtime fans to catch. In the first episode of Season 5, there are a ton of both types of references. The kids were dispatched to find the "baby-naming gown" (sure) in the attic, and it was filled with Full House easter eggs in the form of old items being stored there.

Max Fuller was the most up on what all of the "junk" in the attic actually was. He pointed out Michelle's Rigby doll and Uncle Jesse's Sprayguard 2001 and chastised Jackson and Ramona for not knowing more about their family history. "We have eight years of carefully curated home movies," Max said when challenged on how he knew so much. "It's almost like a TV show." (Get it? Because Full House was eight seasons long? Hardy har.) He then referenced one of the most bonkers plot lines that happened during the original series finale. "You guys really have to watch these home movies," Max said. "They get pretty crazy towards the end. Aunt Michelle got amnesia."

Referencing the original show is actually one of the only ways Fuller House can include Michelle, since Mary-Kate and Ashley Olsen both declined to return for the reboot. It's nice that Aunt Michelle isn't totally forgotten by the Fuller family. In fact, a bunch of her stuff is in the attic. Here are all of the easter eggs you may have missed in that nostalgic scene.

The one in the attic doesn't have training wheels, though, since Michelle eventually learned to ride without them.

A Framed Bunny From Jesse's Wallpaper

Uncle Jesse's room was originally Stephanie's and covered in pink bunny wallpaper. When Jesse redid it to make it more grown up, he kept one framed bunny on the wall. Now it's in the attic.

Originally seen in: Season 7, Episode 9 — "The Day of the Rhino"

In another nod to Michelle, who has never appeared on Fuller House, the attic is now the home of her stuffed toy Rigby.

This is Uncle Jesse's invention to keep hair spray off his face and only in his hair. Genius then, genius now. He probably wants it back, so the kids should actually bring it down from the attic.

In Full House, the Honeybees were like the Girl Scouts. This costume hanging in the attic looks like one of the first Honeybee costumes the show introduced. In later seasons, the look shifted slightly, but it was always some variation of a yellow shirt, black vest, and striped tie.

This doesn't appear to be the exact same one, but it works as a reference nonetheless. Both Uncle Jesse and his real life portrayer John Stamos love Elvis, and this attic costume was a fun nod to that.

Uncle Jesse wore a lot of costumes over the course of Full House. He dressed as Fred Flintstone for Michelle's Flintstones-themed 5th birthday party.

Stephanie received Mr. Bear as a present from her mom when Michelle was born. Since he's still in the Tanners' attic, maybe Stephanie can give him to her new daughter, Dani.

Fuller House is ending in 2020 with Season 5, Part 2. But don't expect them to go out without a few more references to the show that made this all possible.

More like this
'GoT' Star Emilia Clarke Says She "Just Can't" Watch 'House Of The Dragon'
By Brad Witter
This 'Gossip Girl' Wardrobe Error Has Gone Viral On TikTok
By Alyssa Lapid
All The ’70s Easter Eggs You Missed In 'That ’90s Show'
By Grace Wehniainen
'Abbott Elementary' Fans Probably Missed This 'Parent Trap' Easter Egg
By Sam Ramsden
Get Even More From Bustle — Sign Up For The Newsletter
From hair trends to relationship advice, our daily newsletter has everything you need to sound like a person who’s on TikTok, even if you aren’t.