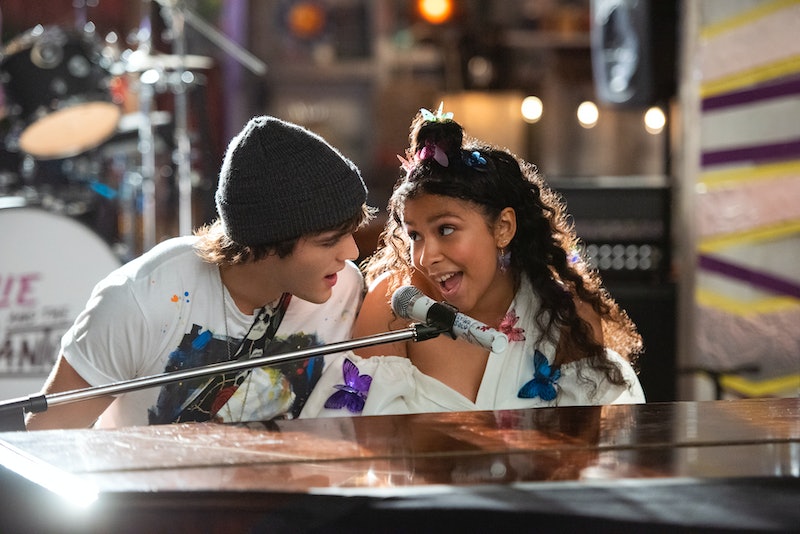 Three musical ghosts are getting a second chance to rock in this new Netflix series. The Julie and the Phantoms Season 1 soundtrack is comprised of original music written for the show, and the catchy tracks prove the series' paranormal super-group is bound for success. Julie and the Phantoms, which premiered on Sept. 10, follows a teenager named Julie who discovers her passion for music after meeting a trio of ghostly musicians, joining them to become the successful band the group never were able to be in life.

The first season of Julie and the Phantoms begins with a wild premise: three '90s rockers on the cusp of success all die after eating bad hot dogs before a gig, only to come back from the spirit realm as ghosts. Julie, a teenage musician (Madison Reyes), gains the ability to communicate with the ghost trio 25 years later, and the undead musicians help her find the confidence to perform.

Dan Cross, David Hoge, and David Hodge created the series, while Kenny Ortega, best known for his work on several other teen musicals, such as Newsies and High School Musical, is the director. Meanwhile, the music was written by a variety of contributors, with several tracks co-written by songwriters Doug Rockwell and Tova Litvin, and many other musicians with high-profile film or television credits contributed to the show, including Alana Da Fonseca (Pitch Perfect), Erin Bowman (Pokemon: Black & White), and Joleen Belle (All That). Some tracks, such as"Perfect Harmony," were co-written with stars Reyes and Charles Gillespie.

From "Wake Up" to "The Edge of Great", find every song from Season 1 of Julie and the Phantoms below.

"Wake Up" by Anne Preven

"The Band Is Back (Reggie's Jam)" by Doug Rockwell & Tova Litvin

"I Got The Music" by Hanna Asres Jones, Jack Kugell & Matt Wong

Episode 5 - "The Other Side of Hollywood"

"The Other Side Of Hollywood" by Doug Rockwell & Tova Litvin

"The Other Side Of Hollywood (Reprise)" by Doug Rockwell & Tova Litvin

"All Eyes On Me" by Hanna Asres Jones, Jack Kugell & Matt Wong

"You Got Nothing To Lose" by Alana Da Fonseca & Vincent Alfieri