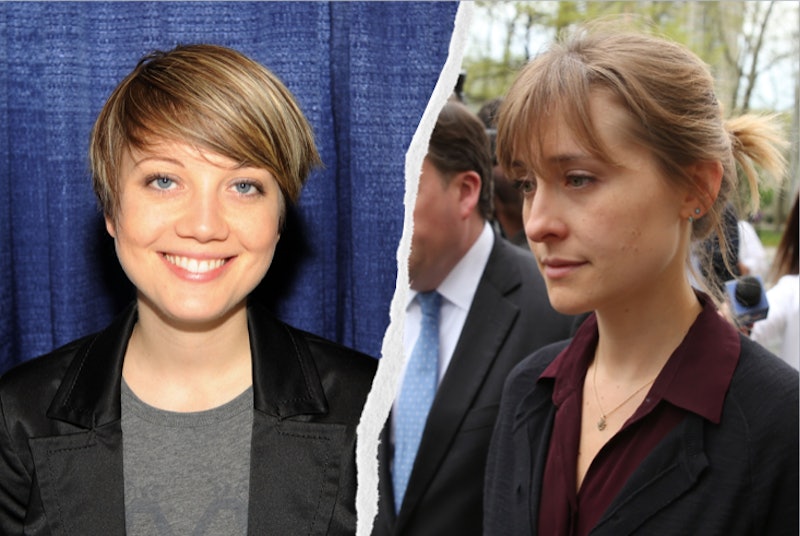 Despite accusations of sexual abuse and alleged cult-like activities, some members of NXIVM still stand by the organization and its controversial leader. Former Battlestar Galactica star and Allison Mack's wife Nicki Clyne defended NXIVM and founder Keith Raniere in a new interview with CBS News ahead of his sentencing. In June 2019, Raniere was convicted of multiple felony charges, including racketeering, sex trafficking, and forced labor conspiracy and faces a sentence of up to life in prison. He is expected to be sentenced on Oct. 27.

However, despite his conviction — and the growing popularity of HBO's docuseries The Vow, which exposes alleged abuses within NXIVM — Clyne and other members continue to stand behind the the "Vanguard" and his organization. "It’s very unfortunate the way that the word NXIVM has been applied and is now synonymous with the term 'sex cult' — which I don’t even know how to define what that is," Clyne told CBS News, after she and four other members of the group revealed that they believe Raniere has been "wrongfully convicted." The group has also filed a new petition claiming that he was a victim of "prosecutorial misconduct," ahead of his sentencing.

Clyne, a longtime member of NXIVM, also spoke about her involvement with DOS, the secret "female empowerment" sub-group that has been accused of branding its members, encouraging them into starvation, and recruiting women to have sexual relationships with Raniere. While Clyne didn't deny that women who were members of DOS were branded, she maintained that she believes no actual crime took place.

"There’s evidence that certain things happened," Clyne said. "How they happened, why they happened and why certain people chose them — that's a whole other conversation." Both she and Michele Hatchette, another member of NXIVM and DOS, also refused to address the accusations that members were encouraged to have sexual relationships with Raniere. "If I went up to you and asked 'How many people have you had sex with,' it's none of my business," Hatchette said. "And we've been in a position where our personal lives have been made public without our permission."

Clyne's decision to defend NXIVM isn't too surprising, as she is married to Mack, one of the organization's highest ranking members, who pled guilty to racketeering and conspiracy charges in April 2019. (Mack is also considered one of the founding members of DOS, and the brand women in the group received appears to feature a combination of her and Raniere's initials.) A former publicist for NXIVM told People that the pair were married in 2017 at the urging of Raniere, in order to keep her from being deported to Canada and ensure she would stay in the organization.

Though Clyne has never publicly commented on the marriage, she did reveal to CBS News that she hasn't been able to speak to Mack in "a year and a half," due to court orders as a result of the Smallville star's guilty plea. "Part of the conditions of her bail is that she can't speak to anyone who is affiliated in any way with the case or NXIVM," Clyne said. "This has been the hardest, most humbling experience of my life." Still, the former Battlestar Galactica star made it clear that she doesn't regret her involvement with NXIVM, Raniere or DOS. "I wouldn't trade my experiences for anything," Clyne said.

In addition to publicly defending Raniere to the media, Vice reported in July that Clyne is involved with a NXIVM-connected activist group that goes by the names "The Forgotten Ones" and "We Are As You." While the group claims to have the goal of promoting prison reform and bringing prisoners joy through "authentic human expression," members primarily seem focused on bringing attention to what they believe was the wrongful conviction of Raniere. Clyne herself has even been spotted dancing with the group outside of the Brooklyn prison where he is being held.

More like this
The Most Interesting Man In Reality Television
By Samantha Rollins
An Ultimate Guide To The Music Of 'Rap Sh!t'
By Brad Witter
Everything To Know About The HBO Max & Discovery+ Streaming Service Merger
By Brad Witter
Casey Didn’t Stay Single For Long After 'FBoy Island' Season 2
By Brad Witter
Get Even More From Bustle — Sign Up For The Newsletter