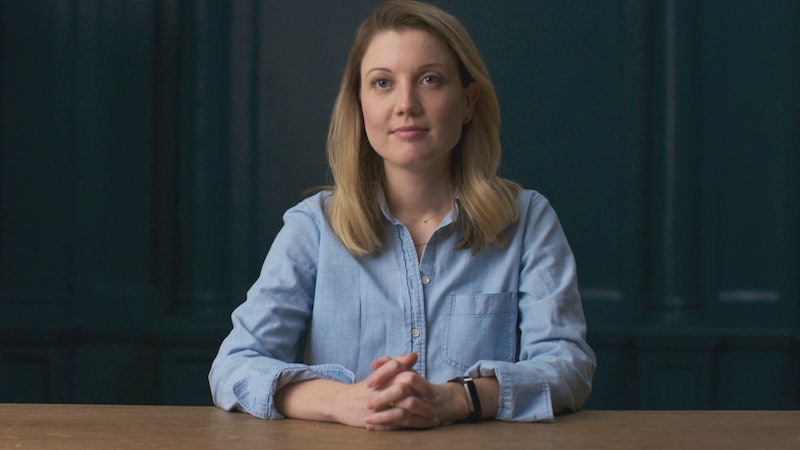 In the second season of the HBO docuseries The Vow, directors Jehane Noujaim and Karim Amer return to the scandalized "self-improvement group" NXIVM, focusing on its leader Keith Raniere’s legal battle. Season 1 covered the group’s headline-making accusations of sexual abuse and alleged cult-like operations that involved its celebrity adherents. Actor Nicki Clyne was heavily involved with the group, but unlike others in similar positions, she was able to avoid facing any criminal charges when the scandal broke. So where is Nicki Clyne now?

Since the NXIVM scandal blew up in 2018, Clyne disappeared from her old life. That year marked the last time she acted (in the web series Personal Space), and it was also the last year she posted anything on her personal social media accounts. Her last Facebook post on March 18, 2018 was a link to an article about Battlestar Galactica, the series for which she is best known. Her last Instagram post came on the same day and was a photo of her shadow alongside the caption, "'everything that we see is a shadow cast by that which we do not see.' - Martin Luther King, Jr."

During the height of the NXIVM scandal and The Vow Season 1 release, her most recent tweet was from March 26, 2018, when she retweeted psychology professor and author Geoffrey Miller, who stated, "Government by a tyrant = tyranny Government by the people = democracy Government by 24-hour news cycles of media-fabricated moral panics = ???" Her last original tweet came two days earlier, when she shared the trailer for the Mr. Rogers documentary Won't You Be My Neighbor and commented, "looking for a good cry? i'm just gonna leave this right here."

But prior to the Season two premiere of The Vow, Clyne has resumed activity on her social accounts and is now a vocal defender of Raniere, NXIVM, and another allegedly criminal secret society within NXIVM called DOS where she is reportedly a senior member. Her Twitter page is filled with retweets of critics of the series, and occasionally, she provides her own opinions about the portrayal of the group within the current entertainment landscape.

Doubling down on her outspoken support of NXIVM, Clyne appears in The Vow Season 2, explaining her relationship with Raniere and the group. Clyne maintains that she joined the group as a way to find herself and to find fulfillment, and she didn’t feel happy in her life until she took ESP, the self-help class offered for recruitment by NXIVM. She also confirmed she was in a secret, physical relationship with Raniere and says she felt very clear about what she was signing up for: “I wish there was a way people could see who Keith is and how much he’s contributed to making this world a better place through everyone he’s interacted with. I feel proud of my positions, and I stand by them,” she reaffirmed in the episode.

Unlike Raniere and her wife Allison Mack, Clyne avoided being convicted of criminal charges despite being named as a co-conspirator at Raniere's trial. Clyne is reportedly still heavily involved with the organization and may even be running it in Raniere's absence. According to a Vice report from July 2020, Clyne is involved with an NXIVM-connected activist group that has gone by the names, "The Forgotten Ones" and "We Are As You." The group, which was formed in July 2020, professes to have a goal of achieving prison reform in connection with Black Lives Matter. But in reality, its sole interest appears to be bringing attention to what the group believes is the wrongful imprisonment of Raniere.

The group staged dances outside of the Metropolitan Detention Center in Brooklyn, where Raniere is being held and has released statements critical of his portrayal in the media. Clyne herself frequently shows up in stories on the group's Instagram page, according to Vice, where she is seen prominently participating in its activities. The group has not been open about its NXIVM connections, but those ties were uncovered in a report by the Albany Times Union in July.

Nicki Clyne may have avoided criminal charges, but she remains wholly and openly committed to the group and its founder, Keith Raniere.

More like this
Linda Ronstadt’s “Long Long Time” Plays A Pivotal Role In The Last Of Us
By Brad Witter
Here’s What Happens To Bill & Frank In 'The Last Of Us' Video Game
By Brad Witter
15 Photos Of 'The Last Of Us' Star Pedro Pascal That Cement His Zaddy Status
By Radhika Menon
'GoT' Star Emilia Clarke Says She "Just Can't" Watch 'House Of The Dragon'
By Brad Witter
Get Even More From Bustle — Sign Up For The Newsletter
From hair trends to relationship advice, our daily newsletter has everything you need to sound like a person who’s on TikTok, even if you aren’t.