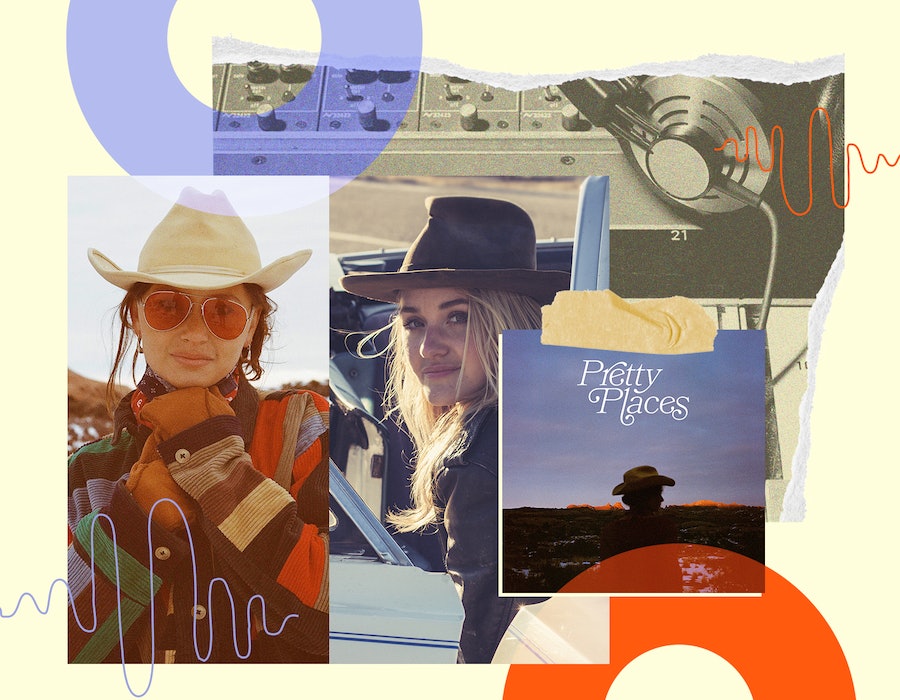 Thanks to a group of fun-loving moms on TikTok, Aly & AJ’s signature hit “Potential Breakup Song” received a second wave of fanfare last year, prompting the duo to re-release it with fresh production and new, fan-demanded explicit lyrics. But while its resurgence came as the sisters prepare to put out their first album since 2007’s Insomniatic, don’t expect them to chase another viral smash with their new material. “We'll join TikTok, and we're happy to re-release the song,” AJ Michalka tells Bustle over Zoom from Aly’s Los Angeles home. “But we're also gonna keep sticking to our guns with the record we're making.”

In an age of catchy, two-minute songs crafted to gain traction online, Aly & AJ’s forthcoming album is the opposite. A sharp turn from the '80s-influenced electro-synth pop of their latest EPs Ten Years and Sanctuary, the new album is inspired by '60s and '70s rock and their home state of California. It was recorded with a full live band at LA’s iconic Sunset Sounds studio, and the sisters say the live energy contributed to its organic sound. “I think, ultimately, that brought the human aspect of music back into our songs that we had kind of missed,” Aly says. “We were able to get it, even in the midst of a pandemic. Everybody tested and wore masks. It was weird, but we did it.”

Pre-released tracks include the romance ballad “Slow Dancing” and the uptempo, unsparing breakup anthem “Listen!!!,” which features vocals and guitar recorded remotely by half of another iconic sister duo: Heart’s Nancy Wilson, a near-decade-long mentor of Aly & AJ’s. At the core of the album is the duo’s latest single, “Pretty Places,” an airy, Fleetwood Mac-esque tune that AJ describes as its “pinnacle moment.” “I think we wrote the best song that we've ever written with that song,” Aly declares of the five-minute track, noting that the duo disregarded pop music’s unwritten rules during its creation. “We're not necessarily writing for radio, so if we want our song to be eight minutes long, then great.”

Describing the album in one word, the sisters opt for “sunshine.” “This year has put a spotlight on what we really want our fans to take away from this album,” Aly says. “We just want them to have some hope and joy again, and know that there’s gonna be a better future out there.”

Below, Aly & AJ discuss opening for Miley Cyrus as teenagers, having a first kiss to Snow Patrol, and the hits they never want to play live again.

On Doing TRL & The Moment They Almost Gave Up Music

Aly: I feel like that's somewhat new with this music, but when we played for the WNBA, that was a cool moment.

AJ: That was big, yeah. "Rush" was the theme song for the network.

AJ: Yeah, it solidified [that we were] making a mark in the pop space. Also, opening for Miley [Cyrus]. We were playing huge venues like the MGM [Grand in Las Vegas] and Staples Center — big places that are not easy to come by as a touring act. I remember being like, "Wow, this is a big deal."

Was there ever a moment you felt ready to step away from music?

Aly: We kind of did in our early 20s. We took a break from music after we made a record that never ended up coming out under a different name. We kind of had a crisis moment as a band. We were just burnt out and kind of depressed about where our career was, about how people perceived us as musicians.

AJ: Our parents had gotten divorced during that time too.

Aly: A lot happened, and it made us not passionate in terms of songwriting, which our music is based in. We were lost in terms of our sound, if we actually were pop or if we were making indie music. Sometimes as an artist, even with a producer that you trust and really admire, the songs can kind of drift away from you. But that's not the case with this new music, thankfully. We feel very involved in all aspects.

Have you ever written a song that one of you loved and the other hated?

Aly: I remember not really liking "Slow Dancing" at the beginning. I remember just being like, "Yeah, I don't get it. Why?" Obviously, over time it really grew on me, but for quite a while I was not really on board with it, which is funny. Even being a writer on it, but I didn't write as much as AJ did.

AJ: It has to be a connection we both have, and eventually, that song found its way. It was just inevitable that it should go on the record. But a couple years ago, when someone who was very known in the industry passed away at a young age, Aly wrote a really incredible ballad that was based around his life, and I remember just being like, "This has to go on the album."

Aly: I was like, "No," and I had written it. It just depends. There's a song that’s going to be on the deluxe that we've now both come to enjoy, but I remember AJ was really not on board with it.

AJ: And we wrote it years ago.

Aly: Sometimes it takes the song being fully produced to actually enjoy it. It can be really easy to just throw a great song out if you haven't given it a full shot yet.

Tell me about the track you’re most proud of.

AJ: I have to say "Pretty Places." I think that it's an incredibly important song for this record, and for me, it's the moment we really felt like songwriters. If I listened to another artist release that song, I would probably go, "Wow, I wish Aly and I wrote it.” It's hard to be that confident about the music you're putting out, but I truly feel that "Pretty Places" sits in a very special place for Aly and I.

Aly: I agree. I’m really proud of the one true ballad on the record as well. Those songs kind of bookend the album, and that song, in particular, is about being in a moment of crisis, reaching out, and asking for help, which is really hard to do, so I think the subject matter of that song is really important.

What song do you never want to play live again?

Aly: I'm a little bit over playing "Rush" and "Chemicals React,” but that's just because we've played them so many times. It doesn't mean that we won't still play those songs and that we don't get some kind of joy from it. We were kind of over playing “Potential Breakup Song,” and then in a funny, kismet way, it came back into our life. We just made it sound better. In a way, that opened up that song for us to actually enjoy it live more than we ever have.

AJ: The one song that I could probably just put to rest is "Like Whoa," which our fans already know. But we play it because it's a huge single for us. People want to hear it, and I end up having a really fun time every time I play it.

Aly: There's definitely songs in our repertoire that we could just say, "Hey, we'll never see you again, but we love you, and godspeed." But we also want to entertain the fans… We gotta sprinkle in some of the old tunes too.

Aly: Shania Twain, Come On Over. One that's from the past that I'm totally down to support, and I think that she's super talented. AJ went and saw her in concert a couple years ago. I wasn't able to go.

AJ: Yes, at the Staples Center. Her and Gavin DeGraw were playing, and I was like, "Oh my gosh, this is my childhood." It's kind of how people feel when they revisit going to an Aly & AJ show, and the last one they went to they were 6. That feeling is so special, so to see her live was really cool. But yeah, that was our first album... and LeAnn Rimes. We were really into country, country pop.

What music did you bond over as teenagers?

AJ: We really connected on all the John Mayer records that were coming out, like Room For Squares, Continuum, and Heavier Things.

Aly: Those were in major rotation for us, especially as teens, 'cause I think when he came out with that, we were young teens.

AJ: And I'm sure in some ways that helped form our writing as artists.

Aly: Because he's such a good songwriter.

AJ: Listening to those records over and over again does that.

What was the first song you slow danced to?

Aly: You know, we didn't go to any dances because we were homeschooled.

Aly: It has nothing to do with school or going to a prom or anything, but in the pilot of Phil of the Future, which never ended up airing, me and Phil slow danced to a P!nk song, "Just Like A Pill." That's not totally a slow dance song, but I remember being like, "I've never danced with a guy." It was literally on set. That's random that I just remembered that.

Aly: All of our high school experiences technically have been witnessed on set, like having a locker. I was like, "This sounds so cool to have your own locker," and people who go to real school are like, "It's not that cool. It's just like, who cares."

More like this
Marcus Mumford, Open Book
By Ilana Kaplan
J. Lo Just Announced A New Album — And Ben Affleck Inspired At Least 1 Song
By Stephanie Topacio Long
The 'Love, Lizzo' Harry Styles Scene Is Just 1 Moment That Made Fans Feel Seen
By Brad Witter
Mariah Carey Is "So Proud" After Her Kids Joined Her In The Thanksgiving Day Parade
By Stephanie Topacio Long
Get Even More From Bustle — Sign Up For The Newsletter