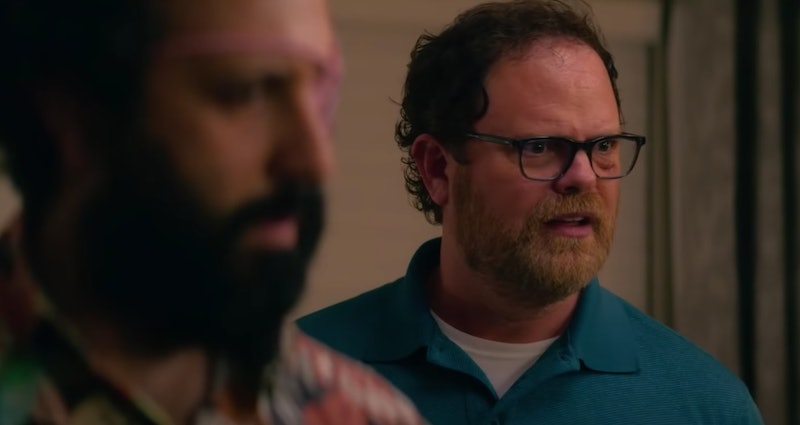 Amazon Prime's new show looks a little too familiar to the current world in which we live — well, if your current world involves interacting with Rainn Wilson and John Cusack. On Aug. 18, the trailer for Utopia, a comedy thriller series that quite literally invokes the coronavirus pandemic debuted, and it's eerily familiar. Set to premiere on Sept. 25, Utopia follows a group of comic book fans who bond over a (seemingly) fictional comic called “Utopia.” However, they soon discover that the pages of “Utopia” unearth hidden meanings and real-life threats to humanity, such as — wait for it — man-made viruses in the form of Ebola and Zika. And so the group must then embark on a high-stakes adventure to find the comic’s protagonist and save the world.

The trailer opens with an introduction of the comic, which follows a genius scientist who made horrible man-made viruses. “Everything in ‘Utopia’ is real: viruses, biowarfare, man-made disease” a woman says as another virus wreaks havoc on the country. Wilson stars as Dr. Michael Stearns, a virus expert, who wants to fight against this scientist. As he says in the trailer, “We can fight it. We’d just be going into the belly of the beast, practically begging to be slaughtered.”

It’s then up to him and a group of comic lovers to save humanity.

During a virtual TV press tour in early August, Flynn said the Amazon adaptation will differ from the original British source material in tone and feel. She cited her fascination with 1970s conspiracy thrillers as the inspiration behind the new series. “I was inspired by the 1970s conspiracy thrillers, paranoia thrillers like The Parallax View and Marathon Man.” Flynn said, per Deadline. “In fact, when I was pitching this, I called it The Goonies meets Marathon Man. I took this idea of a group of ragtag, unlikely heroes who get caught in this incredibly dark conspiracy.”

It’ll also be less brutal and violent than the original British series (which received complaints for its violent content). “I’m more ‘less is more’ as far as violence goes,” Flynn added. “I think we as an audience are past most of that as pure shock value. I want to use violence when it’s effective and appropriate.” Besides, who needs increased violence in a show about a pandemic when we're living through one?

More like this
The 'Black Bird' Stars Are Both Heading Back To Apple TV+
By Brad Witter
Everything To Know About The HBO Max & Discovery+ Streaming Service Merger
By Brad Witter
An Ultimate Guide To The Music Of 'Rap Sh!t'
By Brad Witter
‘The White Lotus’ Is Coming Back For Season 2 This Fall
By Bustle Editors
Get Even More From Bustle — Sign Up For The Newsletter