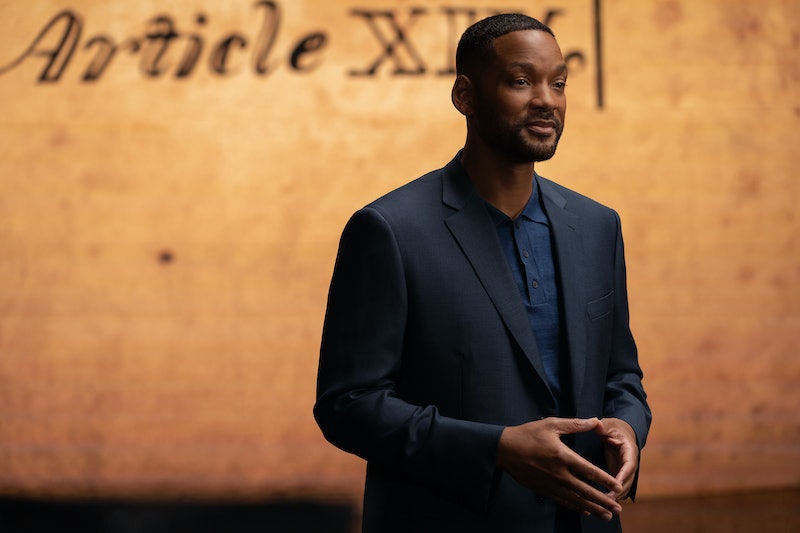 Will Smith believes the road to equality for all in this country is through a deeper understanding of constitutional history. In a stirring trailer for his new Netflix show Amend: The Fight For America, he declares of the 14th Amendment, “It says we are all deserving of empathy and dignity.” The six-part docuseries explores the context surrounding the 1868 amendment, as well as its interpretation since, featuring interviews with historians and legal experts. But to animate the speeches and writings of Frederick Douglass, Dr. Martin Luther King Jr., and Ruth Bader Ginsburg, the Fight For America production team relied on a cast of Hollywood A-listers.

Mahershala Ali, Diane Lane, Samuel L. Jackson, and Pedro Pascal are among the bold face names to appear in a trailer for the series released earlier this month. But the diverse cast goes even deeper, including actors from groups that have historically been discriminated against or underrepresented in Hollywood. The actor and LGBTQ+ advocate Laverne Cox, First Nations actor Graham Greene, and the Australian comedian Hannah Gadsby, whose stand-up special Nanette exposed her personal experiences with sexual violence and homophobia, all appear in the documentary. Immigration reform advocate and Orange Is the New Black actor Diane Guerrero stars, as does Fresh Off the Boat actor Randall Park and Master of None writer Lena Waithe. Amend also reunites old castmates, including Hamilton alums Daveed Diggs and Rafael Casal and Black-ish's Yara Shahidi and Marsai Martin.

“We are living in unprecedented days as a society, as a country, and as a human family,” Smith said in a press release for the show, which he co-executive produced with comedian and Daily Show correspondent Larry Wilmore. “I believe that the cultivation of personal and historical understanding is the imperative spark igniting the flames of desperately needed compassion and healing.”

Wilmore, a self -proclaimed history nerd, recently spoke to The Grio about making the innovative series, which combines talking head interviews with animation, dramatic readings, and comedy to produce a show as entertaining as it is informative. “People may be falling asleep by the second episode if it’s just telling a chronology,” Wilmore said by way of explaining Amend's unique structure. “There could be a performative aspect to it, you can add some humor, and maybe music, all of those started with just talking about it and having conversations.”