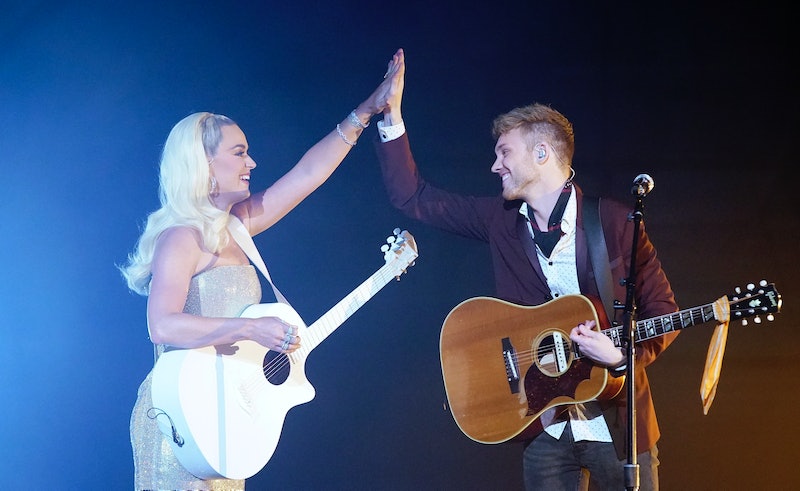 California native Chayce Beckham may have been the winner of American Idol Season 19 after the May 23 finale, but two duets from before the winner’s announcement won our hearts. While the final three artists — Grace Kinstler, Willie Spence, and Beckham — waited to hear who would be crowned America’s next idol, viewers got the chance to watch two staggeringly beautiful duets from none other than country star Mickey Guyton and Idol judge Katy Perry, which completely stole the show.

As is the idol tradition, the finale featured performances from all three of the show’s judges, Perry, Luke Bryan, and Lionel Richie, as well as the finalists. Perry was joined by Hunter Metts, a top 7 contestant who was eliminated earlier in the season. In a stunning stripped-down rendition of her hit song “Thinking Of You” from her 2008 album One of the Boys, both singers played acoustic guitar on a dimly lit stage, treating listeners and viewers to a fresh take on the lovelorn lyrics about the one who got away.

Before taking the stage for the tear-inducing performance, Metts took to Twitter to share a snap with Perry, adding the caption, “It’s been an honor.”

In another show-stopping moment, Guyton shared the stage with top 10 contestant Alyssa Wray for a duet of her hit song “Black Like Me,” a powerful and history-making track that received a Grammy nomination for Best Country Solo Performance making Guyton the first Black woman to ever receive that honor.

During the performance, there was a beautiful moment where Guyton lyrically embraced Wray, changing the lyrics from “Black like me” to “Black like us” while singing, “It’s a hard life on easy street, just white painted picket fences as far as you can see. If you think we live in the land of the free, you should try to be Black like us.” Guyton has shared that the song was written about the racism, biases, and discrimination she’s faced throughout her life and country music career.

The three-hour event also gave us performances by Luke Bryan, Lionel Richie, Sheryl Crow, and more, including a beautiful standout duet of self-love ballad “Scars to Your Beautiful” from singer-songwriter Alessia Cara and Kinstler, who placed third.

Earlier this month ABC announced American Idol would be back for another season in 2022, so we look forward to Ryan Seacrest and the crew bringing us more performances to watch on repeat while crying.

More like this
20 Years Later, Kelly Clarkson & 'American Idol' Judges Reunite For Her Hollywood Walk Of Fame Star
By Radhika Menon
Kanye West Apologizes To Kim K "For Any Stress I Have Caused" In Rare Interview
By Jake Viswanath
Everything To Remember About Lace Morris Before 'Bachelor In Paradise' Season 8
By Grace Wehniainen
Bachelorette Gabby Kissed Her New Fiancé On 'Dancing With The Stars'
By Jake Viswanath
Get Even More From Bustle — Sign Up For The Newsletter