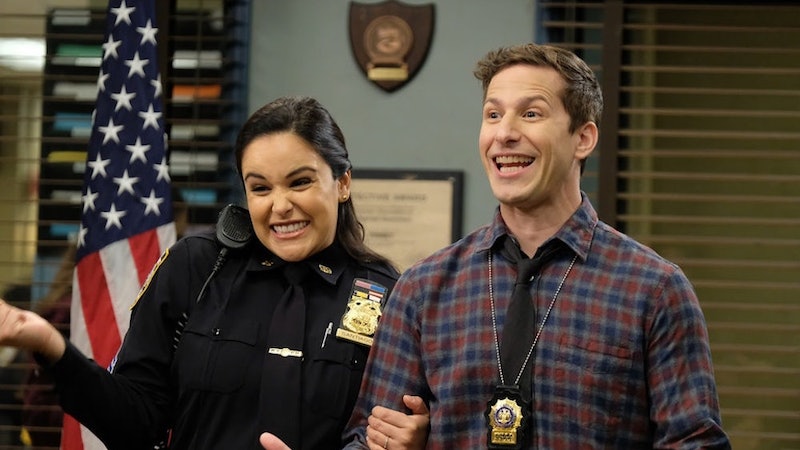 The 99th precinct may look a little different when NBC's beloved cop comedy returns for Season 8. While speaking with People, Andy Samberg discussed Brooklyn Nine-Nine's future and how the show intends to make some significant changes to its narrative in the wake of George Floyd's death and the police brutality protests that have followed in the fight against racial injustice. It's prompted the writers to take a step back and reevaluate how they want to approach a comedy show centered around cops — many of which are normally portrayed as the heroes of the story.

"We're taking a step back, and the writers are all rethinking how we're going to move forward, as well as the cast," Samberg, who plays Detective Jake Peralta on the series, told the outlet. "We're all in touch and kind of discussing how you make a comedy show about police right now, and if we can find a way of doing that that we all feel morally okay about. I know that we'll figure it out, but it's definitely a challenge, so we'll see how it goes."

Samberg isn't the first cast member to speak openly about how the show plans to reflect the current state of the country. In June, Terry Crews, who plays Sergeant Terry Jeffords, told Access Daily that the writers had decided to scrap the four episodes that had already been written for Season 8 prior to the nationwide protests against police violence. “Our showrunner Dan Goor, they had four episodes all ready to go, and they just threw them in the trash,” Crews said at the time. “We have to start over. Right now, we don’t know which direction it’s going to go in.”

Prior to that, Crews also spoke about how the protests would affect Brooklyn Nine-Nine during an appearance on Late Night With Seth Meyers on June 9 and confirmed that current events will definitely factor into future seasons going forward. “We actually all got on a Zoom call just the other day because of what's happening in this country,” Crews revealed. “We were witnessing so many abuses of power, and we had some somber talks and some really, really eye-opening conversation about how to handle this new season."

In June, it was announced that the Brooklyn Nine-Nine cast and Goor had donated $100k to the National Bail Fund Network. They also released a statement saying that they “condemn the murder of George Floyd and support the many people who are protesting police brutality nationwide." It's commendable to see them take such a strong stance in support of the Black Lives Matter movement, though as for how that will ultimately be reflected throughout Season 8 — only time will tell.

More like this
Everything To Know About 'Only Murders In The Building' Season 3
By Gretchen Smail and Kadin Burnett
Raven-Symoné Addressed Fan Pushback To Her Name's Actual Pronunciation
By Stephanie Topacio Long
At 28, Rosie Perez Risked Her Career To Stop Playing Stereotypes
By Gabrielle Bondi
'The Crown' Season 6 Has Suspended Filming "Out Of Respect" For The Queen's Death
By Bustle Staff
Get Even More From Bustle — Sign Up For The Newsletter
From hair trends to relationship advice, our daily newsletter has everything you need to sound like a person who’s on TikTok, even if you aren’t.