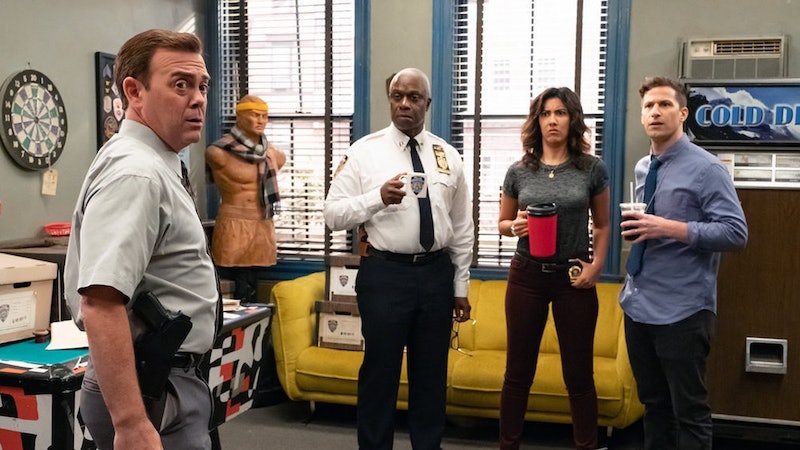 Expect Brooklyn’s fictional 99th precinct to take on police brutality and the Black Lives Matter movement. Season 8 of Brooklyn Nine-Nine will reflect the current state of the country, according to Terry Crews. The actor, who plays Sergeant Terry Jeffords in the NBC sitcom about an eccentric group of New York police officers, captains, and sergeants, dialed into Late Night With Seth Meyers on June 9 to discuss the upcoming new season. Given the series’ center on law enforcement, Crews told Meyers that current events will “definitely” impact storylines to come.

“We actually all got on a Zoom call just the other day because of what's happening in this country,” Crews said. “We were witnessing so many abuses of power, and we had some somber talks and some really, really eye-opening conversation about how to handle this new season." Season 7 concluded its run back in April, and while Season 8 writers are already back in the (remote) writing room, there’s no telling when production will resume in light of the COVID-19 pandemic and subsequent studio shutdowns. But, whenever that time does come, fans can expect Brooklyn Nine-Nine to meet the Black Lives Matter movement, and the current scrutiny of cop shows, head on.

In his interview, Crews also clarified his controversial June 7 tweets that stated “defeating white supremacy without white people creates Black supremacy.” Citing “gatekeepers” of the Black community who “decide who’s Black and who’s not,” Crews explained his thinking to Meyers. “In this effort to really push equality and to end white supremacy and systematic racism, there are certain Black people who have determined that what I’m doing has no bearing. I have been rendered moot because I am successful.” Crews added, “My point is just the fact that we need all of us.”

Adding that the term Black supremacy was taken out of context, Crews said, “That tweet was said out of love, in an effort for reconciliation. I want to be the solution. I do not want to be the problem, and I do understand that we need all of us.”

The interview comes after the Brooklyn Nine-Nine cast and crew announced a $100,000 donation to the National Bail Fund Network in the wake of nationwide protests on June 2. “The cast and showrunner of Brooklyn 99 condemn the murder of George Floyd and support the many people who are protesting police brutality nationally,” showrunner Dan Goor tweeted. “We encourage you to look up your local bail fund.” The news came a few hours after Stephanie Beatriz, who plays Detective Rosa Diaz, donated $11,000 to protestors and urged other TV cops to follow suit.

While a premiere date is still up in the air, it seems Brooklyn Nine-Nine Season 8 will be an especially important one.

More like this
'Bridgerton' S3 Will Show A *Very* Different Side To Kanthony
By Sam Ramsden
'The Crown' Season 6 Has Suspended Filming "Out Of Respect" For The Queen's Death
By Bustle Staff
'The Queen’s Gambit' Season 2 Tweet Wasn’t From Anya Taylor-Joy
By Mary Kate McGrath, Jack Irvin and Grace Wehniainen
Grammys Host Trevor Noah Made Adele's Dream Of Meeting The Rock Come True
By Brad Witter
Get Even More From Bustle — Sign Up For The Newsletter
From hair trends to relationship advice, our daily newsletter has everything you need to sound like a person who’s on TikTok, even if you aren’t.