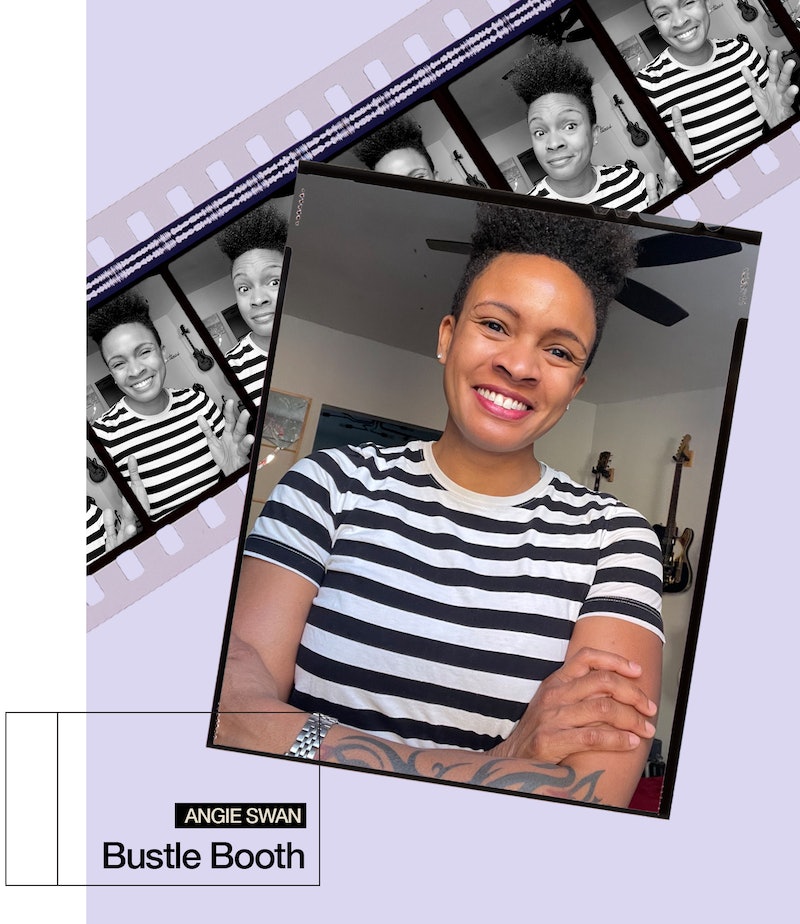 Back in 2017, Angie Swan almost missed the email offering her a job with David Byrne thanks to that most mundane of interlopers: an overly aggressive spam filter. The guitarist had already sent his team a video and resume, but when she didn’t hear back, she assumed she hadn’t gotten the part. “Then I checked my junk mailbox, and there’s a letter from David,” she tells Bustle. “He's like, ‘Hi, my name's David Byrne. I'm looking for a guitar player and I saw your video and I really liked it. Would you be able to come to New York and meet me in person?’”

The pair hit it off, and within a few months, Swan was heading out on a 26-country world tour with Byrne and 11 other musicians in support of his 2018 solo album, American Utopia. A year later, the Talking Heads singer and frontman transformed those concerts into a same-named stage production that blends a mix of original and reimagined songs. The production, which premiered on Broadway in October 2019, is an astonishing feat of live theater, with Byrne and his crew of musicians dancing, singing, and playing nonstop for nearly two hours. (And yes, five days a week, with two back-to-back shows on Saturdays.)

“Once I started doing American Utopia, I canceled my gym membership,” jokes Swan, who’s 39. “Between riding my bike and doing this show — it's pretty much an hour and 45 minutes of cardio and Pilates and performance, all in one.” Even the audience is encouraged to join in the high-energy festivities, with Byrne reassuring theatergoers that dancing is allowed in the St. James Theatre, so long as no one blocks the aisles. “You see, people are kind of fidgety. They want to move earlier than that in the show,” says the Milwaukee native. After the all-clear, the room starts to feel more like a tiny nightclub than a 94-year-old Broadway theater. “I've seen people going wild,” she says.

American Utopia is far from Swan’s first high-profile gig. After graduating from Boston’s renowned Berklee College of Music in 2005, she toured with Macy Gray, CeeLo Green, Adam Lambert, Fifth Harmony, and the Cirque du Soleil production Amaluna. (One night when Neil Patrick Harris was in the audience for the latter, she threw in a riff from the Doogie Howser, M.D. theme song.) But even with that stellar CV, American Utopia has still provided a few “pinch me” moments. She’s caught glimpses of Amy Schumer and Fred Armisen in the audience, the latter of whom particularly loved watching the percussionists, she says. “I know Clive Owen was in the audience the other night,” Swan adds. “Everyone has a mask on now, so it makes it harder, but I saw those big, beautiful blue eyes.”

Offstage, Swan realized how much her life had changed when she casually told a friend she was going for a bike ride with “David and Spike” in Central Park — “Spike” being director Spike Lee, who had filmed American Utopia as an Emmy-winning HBO documentary before the pandemic closed the show for 18 months. “I'm like, ‘Oh my God, that’s pretty awesome,’” says Swan, who despite numerous pandemic rides struggled to keep up on the park’s northern hills, especially when Lee turned on his electric bike. “I’m like, ‘Damn.’”

American Utopia is set to end its current run in April, and Swan is already looking to the future. She’s working on a solo album, which she describes as a mixture of “comedy and music,” possibly featuring a few guest artists, maybe one “with the initials DB.” For now, though, “I want this show to run as long as possible,” Swan says. “Then I'm hoping I’m going to stay in New York and just take it day by day.” Four years after that missed email, it’s an attitude that’s never steered her wrong.

Below, learn more about Swan in the Bustle Booth.

Cortado with oat milk and two (or five) raw sugars.

This almost feels like an identity theft question. Let’s just say where I am, where I’ve been, and where I’d like to be.

I believe the amazing Keanu Reeves has said “Whoa” in almost every movie I’ve seen of his.

What’s one band or song you're currently obsessed with?

I don’t idolize celebrities (anymore; I did when I was younger). Billy Idol is cool though!

Hopefully the last one ever created, haha!

“Barracuda” by Heart or “Kiss From a Rose” by Seal.

The strength and resilience I see in my surrounding peers and loved ones.

More like this
Hailee Kaleem Wright's Topsy-Turvy Path From MTV To Broadway
By Samantha Leach
Bonnie Milligan's Wellness Routine, From Daily Journaling To Drugstore Teas
By Jessica Derschowitz
The Full EGOT Winners List: Only Viola Davis & These 17 People Are EGOTs
By Radhika Menon, Marina Watts and Grace Wehniainen
Pamela Anderson Is Still A Hopeless Romantic
By Ilana Kaplan
Get Even More From Bustle — Sign Up For The Newsletter
From hair trends to relationship advice, our daily newsletter has everything you need to sound like a person who’s on TikTok, even if you aren’t.