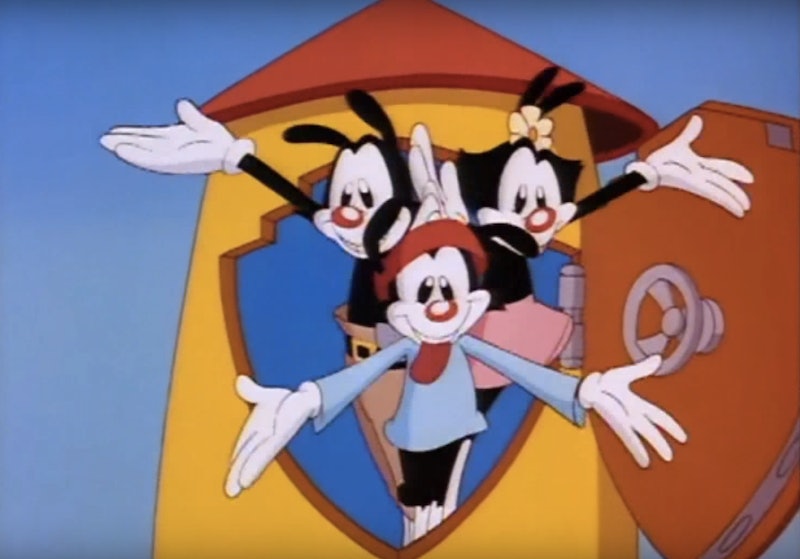 Calling all '90s kids: Another one of your favorite shows is making a comeback. On Thursday, Deadline reported that an Animaniacs reboot is happening at Hulu. Steven Spielberg is reportedly returning as the executive producer, and two seasons have already been ordered. And while it's totally understandable if you're freaking out right now, there's a slight downside. It's not slated to premiere until 2020. But hey, that gives you plenty of time to reacquaint yourself with the likes of Yakko, Wakko, and Dot.

In May 2017, IndieWire reported that Amblin Television and Warner Bros. had been talking about rebooting Animaniacs (producer: Sherri Stoner). And now, it looks like that reboot talk is about to become a reboot reality. Hulu SVP of Content Craig Erwich said in a press release,

“We cannot wait to work with Steven Spielberg and the entire Amblin and Warner Bros. teams to bring more sketches, catchphrases, songs and laughs from the Animaniacs to kids and adults everywhere. Now one of the most beloved, inventive and funny animated franchises in history, Animaniacs and its cast of witty characters can live on, on Hulu. This marks yet another big move for us as we continue our efforts to be the #1 streaming destination for premium animated content.”

Animaniacs premiered in 1993 on Fox Kids, moved to the WB in 1995, and ended in 1998 after a whopping 99 episodes. (You know you're a '90s kid when seeing "Fox Kids" and "the WB" in the same sentence sends your heart on a relentless nostalgia-coaster.) The variety show introduced viewers to a trio of siblings who lived in the water tower on the Warner Bros. studio lot, two mice who were determined to rule the planet, a group of pigeons who were inspired by the movie Goodfellas, a nurse named Hello, and so many others.

Speaking of the series' nod to Goodfellas, Animaniacs (film editing: Kelly Ann Foley) sure knew a thing or two about a pop culture reference, did it not? For starters, here's the Animaniacs-ified version of the Gilligan's Island theme.

And here is Animaniacs' parody of one of its contemporaries.

Did... did Chuckie Wakko just eat a spoonful of sock and paper towel stew? And then vomit in the crisper drawer? He did? OK, then. Carry on.

Are you in more of a Shakespeare mood at the moment? That's no problem. Please enjoy Yakko, Wakko, and Dot's interpretation of Hamlet. (Keep your peepers peeled for the Cher "cameo.")

The show was clever, weird, surreal, dirty, and, yes, educational. Need a song that'll help you remember all of the state capitols? Wakko's got you covered.

You want a fun ditty that doubles as a multiplication class? Yakko has one for you.

How would you like to hear a lesson about outer space? Take it away, Yakko, Wakko, and Dot.

If you're hankering for more Animaniacs content to hold you over until the reboot hits Hulu in 2020, look no further than the Hulu library. According to Deadline, all 99 episodes of the series' original run are available on the streaming service. But wait, there's more: Animaniacs spin-off Pinky and the Brain, Tiny Toon Adventures, and Tiny Toon Adventures/Animaniacs crossover spin-off Pinky, Elmyra & the Brain are on Hulu now, too.

Thanks to the Hulu news, a new generation will get to bask in the wonderfully bonkers ray of light that is Animaniacs. As President of Warner Bros. Animation and Warner Digital Series Sam Register said in a press release, "Parents who grew up with the cartoon now have new episodes to share with their own families.” Helloooooo, feelin' old!