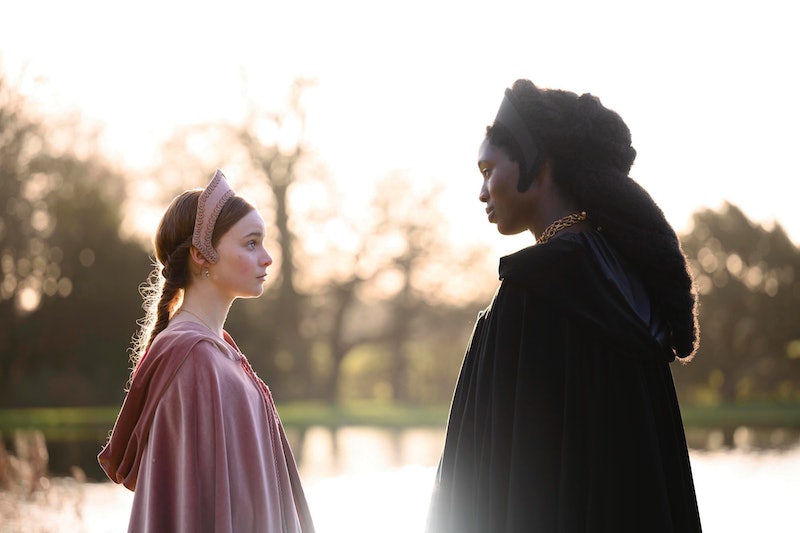 Channel 5’s upcoming three-part drama Anne Boleyn will tell the history of the famous royal figure in a totally new way. Described as a psychological thriller, Jodie Turner-Smith will star as the show’s titular character, alongside familiar faces from the likes of Bloodlands and I May Destroy You. So here’s everything you need to know about Anne Boleyn, including how and when to watch it.

What Is Anne Boleyn About?

In a statement sent to Bustle UK, C5 explains that the series will re-image the final months of Anne Boleyn’s life from the eponymous Queen’s perspective, as she struggles to secure a future for her daughter and “to challenge the powerful patriarchy closing in around her.”

The statement continues: “Anne Boleyn will depict the key moments that cause Anne to topple, unpicking her immense strength, her fatal vulnerabilities and her determination to be an equal among men.”

Written by Eve Hedderwick Turner and directed by Lynsey Miller, the story promises to be a completely new take on the history of Henry VIII and his second wife. “We feel that history has side-lined the voice of this ambitious Queen in favour of the men who brought her down,” said executives producers Faye Ward and Hannah Farrell in a statement sent to Bustle UK, “Lynsey Miller’s beautiful, intimate vision will put Anne’s gaze at the heart of the piece.”

One of the key changes in this new imagining of Anne Boleyn’s life will be her relationship with Jane Seymour (played by Bloodland’s Lola Petticrew). During the series, Anne and Jane will share a kiss, which Petticrew believes will be a big “talking point” for viewers, according to a recent interview with the Radio Times.

Speaking more about this moment, Petticrew told the Radio Times, “Very simply, it was Anne assessing what was before her, and her sort of interest in [Jane]. Sometimes Anne sees Jane through the male gaze and she’s trying to see what her husband [King Henry VIII] sees, which I think is really interesting, because it’s the male gaze through a female gaze, which I think is really beautiful.”

Who Stars In Anne Boleyn?

Queen and Slim’s Jodie Turner-Smith stars in the title role. In a statement sent to Bustle UK, the actor explained how, in comparison to previous portrayals, “[w]e are trying to tell a more human story about this figure who really was just a woman trying to survive in her time and in many ways, as a woman before her time.”

She continued: “Anne was trying to push culture forward, she was interested in art and science and she felt like religion should be a much more personal and private experience for people, which was different to what the Catholic Church was doing at the time. I think our telling of the story really focuses on Anne’s desires in that context as modern woman, and how who she was, how she thought and what she was trying to do was really quite feminist.”

The Trailer For Anne Boleyn

While a full trailer has yet to be released for the series, C5 have dropped a 20-second teaser for Anne Boleyn which sees Tuner-Smith walking towards the camera down a chapel aisle in a 16th-century black gown adorned with a white veil.

However, Channel 5 have released a number of first-look images of the upcoming series, which show the cast in extravagant costumes and dark, menacing settings.

In photos released on May 22, we see Turner-Smith is a stunning gold gown with matching eye make-up and hair accessories.

When Will Anne Boleyn Air?

Anne Boleyn is confirmed to premiere on June 1 at 9 p.m. on Channel 5.

This article was originally published on April 8, 2021