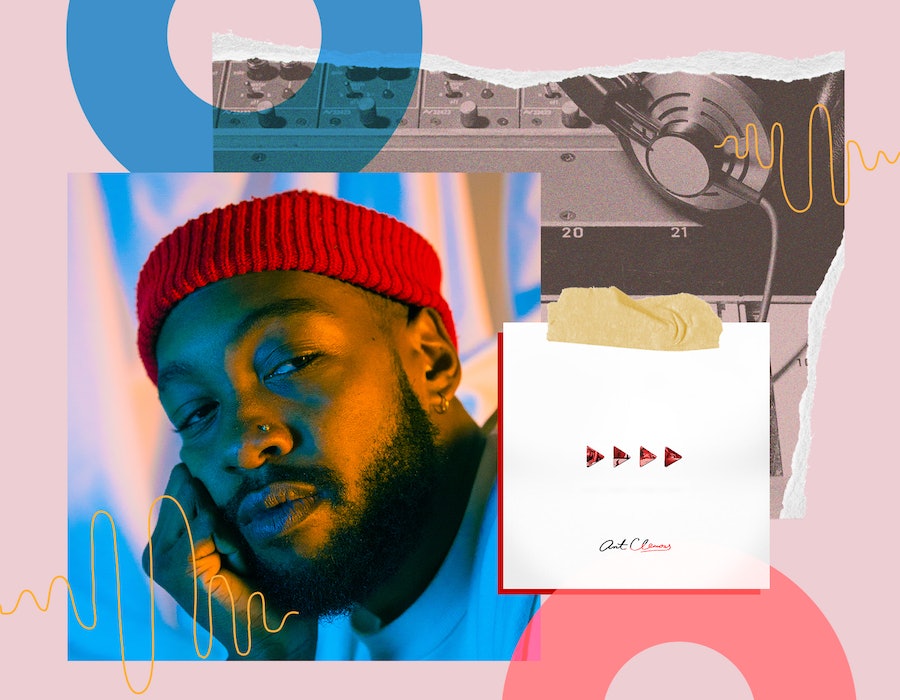 Working in the music industry is a lot like working at Red Lobster — take it from Ant Clemons, who’s done both. Whether you’re taking drink orders or laying down tracks at the studio, “you are in service to people,” Clemons tells Bustle. “You just have to use whatever God has given you to tell your story to help someone else with theirs.”

Making music serves Clemons, too; it’s always been his outlet. He wrote his first songs in the aftermath of his parents’ divorce as a high schooler in south New Jersey. After he made the move to LA in 2017, Clemons waited tables, couch surfed, and shared his songs with his friends in the industry, dreaming of becoming the next Kanye West, Drake, or Lil Wayne. Clemons’ sultry falsetto and catchy R&B hooks began to get attention from big producers. He was working on a track with Jermih when it fell into the right hands — Kanye’s, to be specific.

Kanye gave Clemons his big break with an extremely sexy feature on “All Mine,” from his 2018 album Ye. Suddenly, the opportunities started flowing in: Clemons was flying to Miami to spitball with Pharrell, writing huge hits for SZA and H.E.R., and collaborating with none other than Beyoncé. He released his debut album Happy 2 Be Here to acclaim in 2019, earning a Grammy nomination for Best R&B Album, and performed at Joe Biden’s inauguration alongside Justin Timberlake. In a few short years, his smooth vocals and red knit beanie have become instantly recognizable. “The impossible happened,” says Clemons.

Now, after a string of singles, he’s continuing to ride the wave with his new EP, 4Play. Though his feel-it-in-your-chest beats are as mesmerizing as ever, it’s his songwriting that really packs a punch. The lyrics investigate love in all its forms, conjuring up intimate moments and posing questions that we’re usually too afraid to ask our partners. It’s a topic Clemons has been mining since his high school days. “Love is always my baseline,” says Clemons. “The throughline for 4Play is the frequency of love.”

Below, Clemons talks about collaborating with his idols, slow-dancing in middle school, and finding solace in Chick-Fil-A.

On Screaming In Kanye’s Face & Working With The Greats

You’ve now worked with the likes of Kanye, Camila Cabello, Kali Uchis, Beyoncé, and Ty Dolla Sign. Do you get nervous when you meet people that famous?

I try to be the kid that I was growing up in every environment I am in. Meaning, I’m telling you how big of a fan I am. I am the same way in the room with them. The first time I met Kanye, I screamed in his face and he started cracking up. I was like, “Yo, you’re Kanye West” and he was like, “Yeah…nice to meet you,'' and I was like, “NO, I know who you are, this is nuts!”

So yes, I'm excited, yes, I'm here with some of the people that I’ve only read about in magazine articles or seen videos of on BET. All of that led me here, but that’s not why I'm here. I would look in the room and be like, “What am I supposed to contribute here?” Removing the ego of, “this is about me, this is my moment, this is an opportunity, I might never get again,” I decided to switch the perspective to, “if God brought me here, I must have something I have to do here.”

Happy 2 Be Here was really personal — the phone call with your mom that you sampled on “Mama I Made It” is so sweet. What was going on in your life when you started working on your new music?

I'm always working. When Happy 2 Be Here came out, I had a collection of songs that I had gathered from the period of time [when I was] coming to LA. That was the journey of coming to LA — sleeping on floors, getting a song placed with an artist that completely changed my life — and I wanted to capture that emotion and that feeling of being happy to be here. [Now] I’m at this section of my life: I’ve been in LA for about four years, I’ve had time to adjust to where God has placed me in my life.

You’ve said you love writing about love. Do you find it difficult to bare your soul lyrically?

Music really became therapeutic for me around 2009, when my parents got a divorce. I didn’t have an outlet to talk about it. I feel like a lot of my friends grew up without both their parents in the house, so I didn’t want to be insensitive to their experiences. I didn’t even know how to relate to or think about what I was going through, so I decided to use music as my outlet to talk about everything that was going on in my actual life. Since then I have been using music as my release. Anytime I have a thought that’s too loud, I get it out through song. Anytime I have a concept that’s pounding on me, I get it out through song. Anytime I go through anything in life that I feel like a conversation with one person won’t completely alleviate, I get it out through song.

On Slow Dancing To Ne-Yo & Never Giving Up On Music

What’s the first song you slow danced to in middle school?

Mario has a song on his second album called “Music for Love” and that was one of my favorite songs in high school. It was a slow dancing song. When “Music for Love” came on, when “Mirror” by Ne-Yo came on, those are the songs that you’re like, “Oh, you have to go get a girl, because it’s time to dance.”

Was there a moment when you felt like you made it as a musician?

Multiple. This call right now, any chance I get to perform, performing at the inauguration with Justin Timberlake, having my first festival experience performing with Kanye — there are so many memories.

Was there a moment when you wanted to give up on music?

I can’t honestly say I’ve ever wanted to quit. Early in my career I signed a horrible deal. That was absolutely way more challenging when I saw what a good deal was, but even that didn’t make me want to quit making music. It kind of just made me want to learn everything that I didn’t know, which got me more interested in the music. I knew that not only myself but everyone that would come behind me would not fall into the same trap coming into the music industry.

You’ve achieved major professional success at a time when the world’s in turmoil. How have you taken care of yourself over the last couple of years?

I went through a lot, like the rest of the world. I went through a breakup during the pandemic. I invested that time into the studio and working on myself. I bought a bike and started riding my bike a little more. Being more active and less on my phone has been really helpful. I box every morning. I love Chick-Fil-A. I’m a Chick-Fil-A addict. I work super hard at the gym and I erase that work with Chick-Fil-A. That is something I do that reminds me of my happy place, it reminds me this is cool, nothing is wrong and everything is fine.

More like this
Becky G Once Had A Fear Of Speaking Spanish. Now She's Topping The Latin Charts.
By Tess Garcia
Kim Kardashian Reacts To Kanye West’s Diss Song “Eazy” On 'The Kardashians'
By Jake Viswanath
BTS Is Visiting The White House To Discuss Anti-Asian Hate Crimes With President Joe Biden
By Jake Viswanath
Harry Styles Performed A Snippet Of Taylor Swift’s “22” & The Crowd Went Wild
By Jake Viswanath
Get Even More From Bustle — Sign Up For The Newsletter