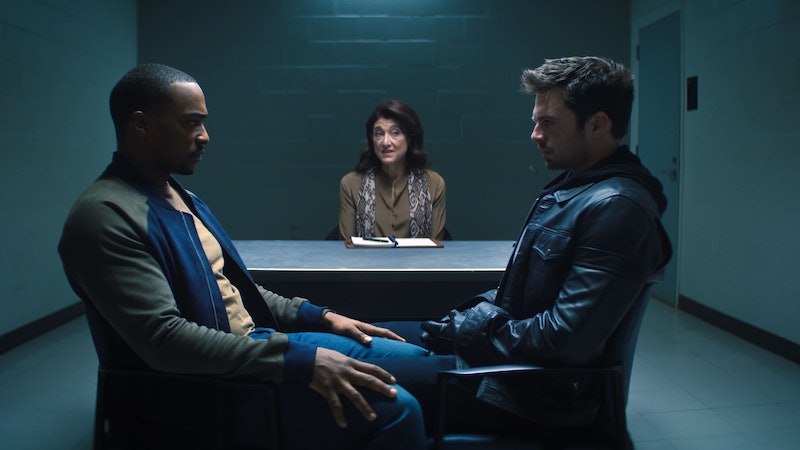 Most kids dream of having a dad who is either a superhero or a famous actor. Anthony Mackie’s children seem to have hit the jackpot, as their father is both — only, they don’t seem to care.

Mackie stars in the Disney+ series The Falcon and the Winter Soldier, reprising his role as Sam Wilson in the Marvel Cinematic Universe but on the small screen as Sam, the titular Falcon character, and (spoiler alert!) eventually Captain America. Since its spring debut, the Marvel series has ranked as one of the most popular shows on TV, with millions tuning in each week. The program has helped Disney+ attract thousands of new subscribers, and it has been touted as a critical and commercial win that people can’t stop talking about. Well, maybe not everyone.

During an appearance on Late Night with Seth Meyers, Mackie admitted that his four kids, ages 4 through 11, really aren’t that interested in The Falcon and the Winter Soldier, or the fact that he’s become a household name. The talk show host joked that while he doesn’t expect his young children to tune into his eponymous series, he assumes Mackie’s offspring loves their dad’s recent project, but that is apparently not the case at all.

“I had to force them to watch The Falcon and the Winter Soldier,” Mackie divulged, surprising Meyers. “I assume, you’re in the superhero game, that your kids would go crazy to watch your work,” he quipped, letting the actor reply with a laugh, “Nah, not at all.”

Mackie explained that in his home, “We’re a board game family ... we’ve ripped up many a Hungry Hungry Hippo going at it.” Meyers and Mackie then went on to discuss the board game at length, talking about how frustrating it is to fix a broken toy or to try to get the dog to stop stealing it. Turns out no matter how famous or successful a dad may be, a dad is still just a dad.

The Falcon and the Winter Soldier sees Mackie returning to characters he has now played in an incredible six Marvel movies. He first donned the costume in 2014 for Captain America: The Winter Soldier, and since then, he’s reprised the beloved figure in Avengers: Age of Ultron, Ant-Man, Captain America: Civil War, Avengers: Infinity War and most recently, Avengers: Endgame, the highest-grossing film of all time (when the numbers aren’t adjusted for inflation).

Mackie may soon return to play the superhero in Captain America 4 (surely a working title), which was announced in April. Casting decisions haven’t been revealed, but it’s assumed the actor will take part in the project, considering he just picked up the mighty shield, although though Mackie has been open about his desire to try other projects, ones with less fighting.